The festivals are over and Earthlings from around the globe headed home Sunday after a weekend camping and partying in the dusty Nevada desert and trekking to remote gates of Area 51, a formerly top-secret U.S. military base long the focus of UFO and space alien lore.
(1/10) 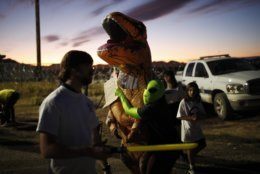 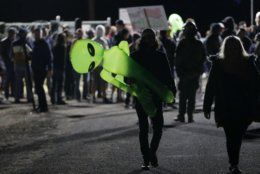 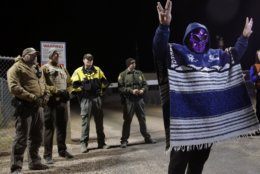 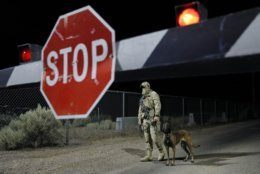 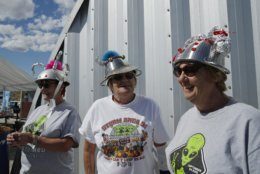 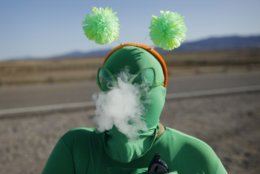 HIKO, Nev. (AP) — The festivals are over and Earthlings from around the globe headed home Sunday after a weekend camping and partying in the dusty Nevada desert and trekking to remote gates of Area 51, a formerly top-secret U.S. military base long the focus of UFO and space alien lore.

They left in peace, officials and the host of a free “Alienstock” festival said Sunday.

Visitors hailed from France, Russia, Germany, Peru, Sweden, Australia and many U.S. states — many toting cameras — in answer to an internet post in June suggesting that if enough people rushed a military base to “see them aliens” at 3 a.m. Sept. 20, authorities couldn’t stop everyone.

More than 2 million Facebook users clicked their interest, but in the end only a few thousand made the trip to the tiny Nevada desert city of Rachel, population about 50, a more than two-hour drive north of Las Vegas.

Campers and festival-goers in Rachel peaked at about 3,000 on Friday, said Eric Holt, the Lincoln County official who headed planning for a feared influx of at least 30,000.

A few hundred more camped and attended one night of an abbreviated festival about 40 miles (64 kilometers) away in Hiko, population 120.

“It seems like a lot of good people chilling and having a good time,” observed Dave Wells, a 56-year-old stonemason and festivals-seeker from Cincinnati wearing a day-glow green festival T-Shirt and taking in the scene Saturday in Rachel.

Did anyone find actual extraterrestrials or UFOs? (As if anyone could really tell among the masked and costumed beings posing for photos and cavorting in the desert.)

“We didn’t,” said Little A’Le’Inn owner-turned-“Alienstock” festival host Connie West, proprietor of the 10-room motel and cafe that became the center of the extraterrestrial-seeking universe.

“But we found peace. And friendship,” she said Sunday as campers packed up to leave and volunteers began cleaning up.

Organizers pulled the plug Saturday on a second concert after drawing only about 500 ticket-buyers for a Friday show. Preparations had been made for up to 5,000.

Authorities said more than 1,000 people visited Area 51 gates near Rachel on Thursday and Friday. Officials didn’t report the number on Saturday. Holt said Lincoln County sheriff’s deputies on the public side of the gates were sent home early Sunday.

In the end, no one actually “stormed” Area 51, although deputies in rural Nye County resorted to “heated warnings” to disperse as many as 200 people who gathered before dawn Friday near a conspicuously green “Area 51 Alien Center” in Amargosa Valley, Sheriff Sharon Wehrly said. No one was arrested.

A permit for a festival at that site, which is about a 90-minute drive west of Las Vegas, was denied by county officials.

In Lincoln County, six people were arrested during the weekend for misdemeanors, mostly trespassing beneath the floodlights and cameras of two military base gates and the watchful eyes of sheriff’s deputies from far-flung corners of Nevada.

Sheriff Kerry Lee said he watched about 20 people feign a rush before dawn Saturday toward a base gate outside Rachel, before stopping short.

Two men were detained by military security officers inside the perimeter of the vast Nevada Test and Training Range, an area almost twice the size of Delaware where the U.S. Air Force conducts aerial combat and bomb training, and tests stealth aircraft. The men were turned over to sheriff’s deputies and charged with trespassing, Lee said, and their vehicle was impounded.

“I’m going to call it a success from our end. It’s because we got out in front of it,” said Varlin Higbee, a rancher and Lincoln County commissioner who signed an emergency declaration earlier this month.

Officials had feared unruly crowds would overwhelm water, electricity, food, fuel, internet and telephone service in a county with just 5,200 people covering an area the size of Massachusetts.

Higbee said commissioners who allocated $250,000 in emergency funds to brace for trouble might sue to recoup costs.

“Think about it,” Higbee said. “Here’s an illegal event, supporting an illegal activity — storming the gate. We’re not sure what we’re going to do at this point.”

He compared the initial internet post to an incitement to violence.

Matty Roberts, a 20-year-old from Bakersfield, California, has acknowledged his “storm Area 51” Facebook post in June was a hoax.

But he promoted events in Rachel before breaking earlier this month with West.

He said Sunday that Lincoln County officials didn’t have to spend money and could have simply prevented events in Rachel and Hiko by denying permits, like Nye County did in Amargosa Valley.

Roberts hosted a Thursday evening event at an outdoor venue in downtown Las Vegas, also using the “Alienstock” name. He said he wants to trademark the name and take it on tour to reach people who couldn’t travel to Nevada.

West, in Rachel, said she’s open to holding her festival again next year.

“As well as it turned out? Why the heck not?” she said. 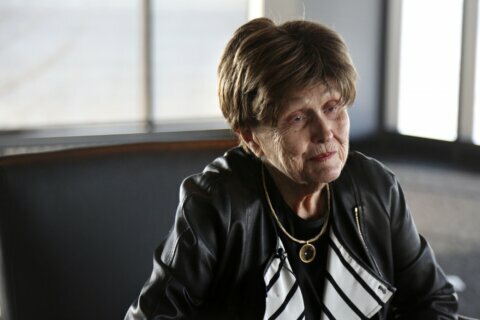 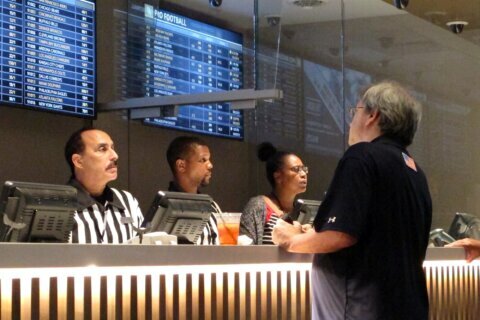