PORT-AU-PRINCE, Haiti (AP) — Cholera cases are overwhelming Haiti as experts warn the situation could worsen now that the country is bustling once again after a paralyzing fuel blockade that lasted two months.

Dr. Jeanty Fils, a spokesman for Haiti’s Ministry of Health, told The Associated Press that people are back on the streets and likely spreading cholera as the government struggles to find life-saving equipment including IV supplies amid an ongoing discussion on whether to request cholera vaccines.

“We need more resources,” he said. “Cholera cases continue to climb in Haiti.”

At least 175 people have died and more than 7,600 have been hospitalized, the Pan American Health Organization said Tuesday, although officials believe the numbers are much higher as a result of under-reporting.

Even so, the number of suspected cases had jumped by 33% in just a week.

The worsening situation prompted the United Nations to announce Tuesday that it, along with Haiti’s government and other partners, was seeking $146 million to help fight cholera. At least half a million people in Haiti are at risk of contracting the disease, according to PAHO and the World Health Organization.

“The surge in cases in recent weeks and the rapid spread of cholera in the country is worrying,” said Ulrika Richardson, U.N. resident and humanitarian coordinator.

Fils noted that cholera cases were likely contained during the fuel blockade since gas stations were closed and many in the country of more than 11 million people remained at home.

“Now people are going to move around more,” he said. “It could start spreading.”

She said if people sickened with cholera start traveling to areas with poor sanitation and a lack of drinking water, the number of cases will likely rise.

“It’s a match that can light a fire,” she said.

The number of patients seeking help at Doctors Without Borders hospitals in the capital of Port-au-Prince have spiked in recent weeks, with more than 6,500 admitted so far. Beds filled up so quickly that the aid group was forced to open a fifth center two weeks ago, said Alexandre Marcou, Haiti’s field communication manager.

Inside that new center, mothers hovered over their children on a recent morning. One rearranged the tangle of intravenous cables surrounding her baby while another pumped the little cheeks of her young daughter to force her mouth open and give her an oral supplement. Nearby, adult patients sat in silence in plastic chairs with large white buckets between their legs, holding their head to one side with their arm. Some ate rice and red beans out of small containers that nurses later collected.

Marcou noted that people can survive cholera if treated on time, but the recent lack of fuel and ongoing violence between gangs that has worsened since the July 2021 assassination of President Jovenel Moïse has prevented Haitians from reaching hospitals and medical clinics.

“There’s a huge security crisis. And we are tremendously lacking resources,” said Ralph Ternier, chief medical officer in Haiti for the nonprofit Partners in Health. “The epidemic is spreading so quickly that vaccines are really the tool that we need.”

The Pan American Health Organization told the AP that it is supporting Haiti’s government in preparing a request for vaccines as well as to plan and implement vaccination campaigns. But it wasn’t clear if and when that might happen.

In October, the World Health Organization announced a worldwide cholera vaccine shortage that has forced it to suspend the usual double-dose strategy “at a time of unprecedented rise in cholera outbreaks worldwide.” At least 29 countries have reported cholera cases this year, compared with fewer than 20 on average for the past five years, the agency said.

Mayronne said cholera vaccines can be a useful tool, but noted that a single dose can lower one’s risk by only 40%.

“In and of itself, a vaccine is not a be-all and end-all,” she said.

Amid the lack of vaccines in Haiti, crushing poverty made worse by a spiraling economic crisis and double-digit inflation is contributing to the spread of cholera because many are unable to access or afford potable water or food that isn’t contaminated.

Lovena Shelove, 30, lost her two-year-old son to cholera despite a kind neighbor who brought drinking water to try and revive the toddler after severe bouts of vomiting and diarrhea.

“I don’t have anything in the house,” she said in a soft voice. “I could not afford anything to provide for the kids.”

Her other child, a 7-month-old daughter, is still hospitalized.

Cholera is caused by a bacteria found in contaminated food or water and is easily transmitted, especially in crowded and unhygienic conditions. Sanitation further worsened during the fuel blockade given that companies that supplied drinking water were forced to suspend operations.

Haiti’s first outbreak occurred in 2010 after U.N. peacekeepers introduced the bacteria into the country’s largest river by sewage runoff from their base. Nearly 10,000 people died, and thousands of others were sickened.

The number of cases eventually dwindled, and the World Health Organization was preparing to declare Haiti cholera-free until the government announced in early October that at least three people had died — the first deaths reported in three years.

Patrick Joseph, 40, was among the thousands recently hospitalized after he became severely dehydrated.

“I don’t know where I got cholera from,” he said, although he suspects it’s from the water he buys from a seller who claims it’s treated. “I feared that I would die if I did not go to the doctor.”

It’s a feeling familiar to street vendor Lucna Francois, who had been relying on well water because the fuel blockade prevented her from accessing potable water. The 24-year-old got so sick on a recent evening that she called a relative to take her to the hospital.

“I am dying,” she recalled telling them. “I was very, very weak.”

Fils, with Haiti’s health ministry, said another big challenge the government faces is that many people don’t believe cholera exists and are not taking measures to avoid becoming sick.

“Prevention, it’s a must,” he said. “It’s not just a matter of drinking (clean) water.” 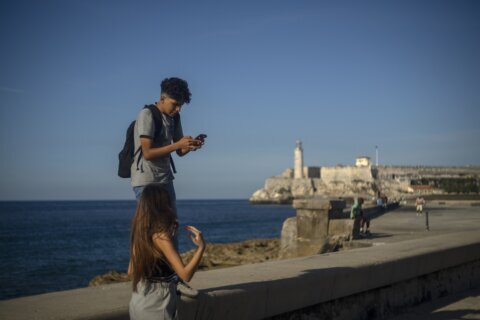