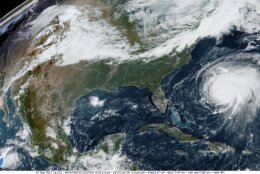 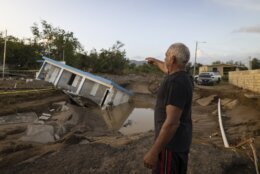 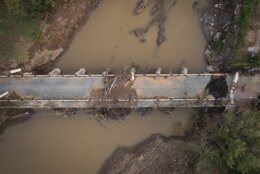 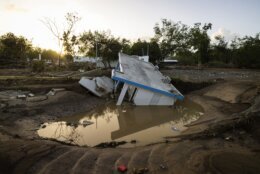 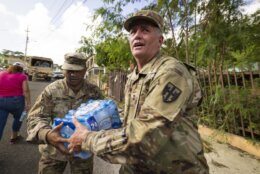 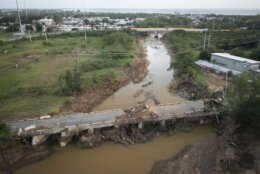 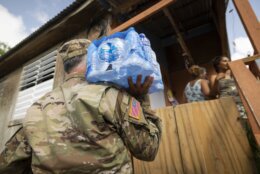 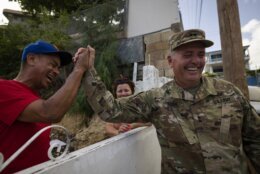 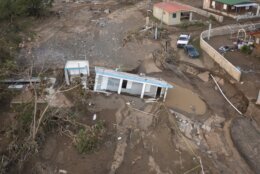 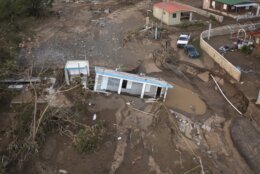 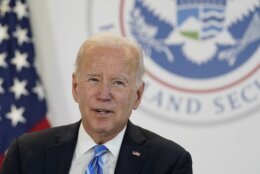 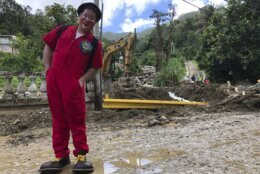 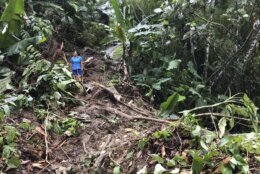 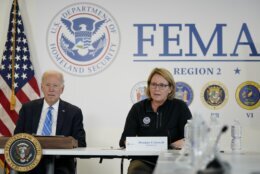 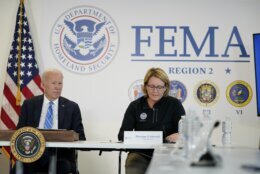 SAN SALVADOR, Puerto Rico (AP) — President Joe Biden said Thursday the full force of the federal government is ready to help Puerto Rico recover from the devastation of Hurricane Fiona, while Bermuda and Canada’s Atlantic provinces prepared for a major blast from the Category 4 storm.

Speaking at a briefing with Federal Emergency Management Agency officials in New York, Biden said, “We’re all in this together.”

Biden noted that hundreds of FEMA and other federal officials are already on the ground in Puerto Rico, where Fiona caused an island-wide blackout.

More than 60% of power customers remained without energy on Thursday, and a third of customers were without water — and local officials admitted they could not say when service would be fully restored.

Biden said his message to the people of Puerto Rico who are still hurting from Hurricane Maria five years ago is: “We’re with you. We’re not going to walk away.”

That seemed to draw a contrast with former President Donald Trump, who was widely accused of an inadequate response to Maria, which left some Puerto Ricans without power for 11 months.

The hurricane was still at Category 4 force late Thursday as it was making a close pass to Bermuda, where authorities opened shelters and announced schools and offices would be closed Friday.

Fiona was expected to still be a large and dangerously potent storm when it reached Canada’s Atlantic provinces, likely late Friday, as a post-tropical cyclone.

“It’s going to be a storm that everyone remembers when it is all said and done,” said Bob Robichaud, warning preparedness meteorologist for the Canadian Hurricane Centre.

Hundreds of people in Puerto Rico remained cut off by road four days after the hurricane ripped into the U.S. territory, and frustration was mounting for people like Nancy Galarza, who tried to signal for help from work crews she spotted in the distance.

“Everyone goes over there,” she said pointing toward crews at the bottom of the mountain who were helping others also cut off by the storm. “No one comes here to see us. I am worried for all the elderly people in this community.”

At least five landslides cover the narrow road to her community in the steep mountains around the northern town of Caguas. The only way to reach the settlement is to climb over thick mounds of mud, rock and debris left by Fiona, whose floodwaters shook the the foundations of nearby homes with earthquake-like force.

“The rocks sounded like thunder,” recalled Vanessa Flores, a 47-year-old school janitor. “I’ve never in my life heard that. It was horrible.”

At least one elderly woman who relies on oxygen was evacuated on Thursday by city officials who were working under a pelting rain to clear paths to the San Salvador community.

Ramiro Figueroa, 63, said his bedridden 97-year-old bedridden father refused to leave home despite insistence from rescue crews. Their road was blocked by mud, rocks, trees and his sister’s pickup, which was washed down the hill during the storm.

“That has helped me enormously,” Figueroa said as he scanned the devastated landscape, where a river had changed its course and tore up the community.

At least eight of 11 communities in Caguas are completely isolated, said Luis González, municipal inspector of recovery and reconstruction. It’s one of at least six municipalities where crews have yet to reach some areas. People there often depend on help from neighbors, as they did following Hurricane Maria, a Category 4 storm in 2017 that killed nearly 3,000 people.

Miguel Veguilla said that in Maria’s aftermath he used picks and shovels to clear debris. But Fiona was different, unleashing huge landslides.

“I cannot throw those rocks over my shoulder,” he said.

Like hundreds of thousands in Puerto Rico, Veguilla has no water or electricity service, but said there is a natural water source nearby.

Danciel Rivera, 31, arrived in rural Caguas with a church group and tried to bring a little cheer by dressing as a clown.

“That’s very important in these moments,” he said, noting that people had never fully recovered from Hurricane Maria. “A lot of PTSD has reared its head these days.”

His huge clown shoes squelched through the mud as he greeted people, whose faces lit up as they smiled at him.

Puerto Rico’s government said some 62% of 1.47 million customers remained without power Thursday. A third of customers, or more than 400,000, did not yet have water service.

“Too many homes and businesses are still without power” Biden said in New York, adding that additional utility crews were set to travel to the island to help restore power in the coming days.

The executive director of Puerto Rico’s Electric Energy Authority, Josué Colón, told a news conference that areas less affected by Fiona should have electricity by Friday morning. But officials declined to say when power would be restored to the hardest-hit places and said they were working first to get energy to hospitals and other key infrastructure.

Neither local nor federal government officials had provided an overall estimate of damage from the storm, which dropped up to 30 inches of rain in some areas.

Bermuda Premier David Burt sent a tweet urging residents to “take care of yourself and your family. Let’s all remember to check on as well as look out for your seniors, family and neighbors. Stay safe.”

Hurricanes in Canada are somewhat rare, in part because once the storms reach colder waters, they lose their main source of energy. and become extratropical. Those cyclones still can have hurricane-strength winds, but now have a cold instead of a warm core and no visible eye. Their shape can be different too. They lose their symmetric form and can more resemble a comma.

Fiona so far has been blamed for at least five deaths — two in Puerto Rico, two in the Dominican Republic and one in the French overseas department of Guadeloupe.

Fiona also hit the Turks and Caicos Islands on Tuesday, but officials there reported relatively light damage and no deaths.

Puerto Ricans seething over lack of power days after Fiona

Quake of magnitude 6.1 hits in Pacific off southern Chile