MEXICO CITY (AP) — Two months after a pair of Jesuit priests were killed in a remote mountain community in northern Mexico, the suspected killer remains on the loose and townspeople are frightened, but the religious order says it is not leaving.

The killings of Javier Campos and Joaquín Mora, as well as a tourism guide they tried to shelter, stirred anger in Mexico and the Roman Catholic Church. Frustration has grown with failure to capture the suspect, the alleged leader of a local drug gang, José Portillo Gil, alias “El Chueco,” or “The Crooked One.”

Two priests who survived the attack remain at the parish in Cerocahui in the Tarahumara Mountains of Chihuahua state, but now move about with military escorts.

Despite the killings and continuing safety concerns, the Jesuit order dismissed any idea of closing its mission there. It is sending two more priests and a person studying for the priesthood, said Jorge González Candia, an advisor with the Roman Catholic Society of Jesus in Mexico, who was assigned to the case.

“We saw very clearly that we could not withdraw due to the fear or insecurity that exists,” González said.

Tensions rose in Cerocahui after a video circulated on social media last week of a masked individual who identified himself as Portillo Gil. The man denied being responsible for the killings, said he knew what really happened and seemed to make a veiled threat against one of the surviving priests.

González said it was “incredible” that 1,000 soldiers and 200 national guardsmen deployed to the area had not been able to find Portillo Gil. A reward of about $250,000 was offered.

“After that video, we are asking for protective measures,” González said. There is concern among the Jesuits that the gang could attack their people in the area, something that had not previously occurred during their decades working with Indigenous communities in those mountains.

Portillo Gil already had a pending arrest order, but had continued to roam the region with impunity. He was also accused in the 2018 killing of Patrick Braxton-Andrew, a 34-year-old Spanish teacher from North Carolina who was traveling in the Tarahumara Mountains. Portillo Gil’s gang apparently suspected Braxton-Andrew of being a U.S. drug agent.

Portillo Gil’s gang is believed to be tied to the Los Salazar, which is associated with the Sinaloa cartel.

After the killings, the military set up a base in the area. Soldiers now accompany the Jesuits as they travel in the area.

González Candia said the two surviving priests who stayed in Cerocahui had asked to do so because “there is a love of the land, the culture, the people and they also see the need to accompany the mourning.” However, he said the order continues to evaluate their situation.

Asked if capturing Portillo Gil would resolve the crime problems in the region, González Candia said it had been seen elsewhere that “when you only catch a boss, the criminal groups multiply, the number of crimes increases and the prisons fill up.”

Investigation, change to local structures and political will are needed to make the changes that will generate peace, he said. 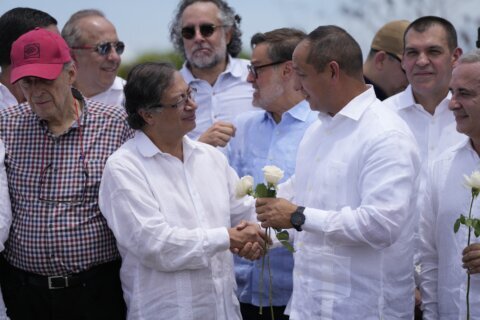