BUENOS AIRES (AP) — Prosecutors on Monday asked a judge to sentence Argentine Vice President Cristina Fernández to 12 years in prison and bar her from holding public office for life for allegedly leading a criminal conspiracy that irregularly awarded public works contracts to a friend and ally.

“We are faced with the biggest corruption maneuver that this country has ever known,” prosecutor Diego Luciani said in his closing arguments in the trial of Fernández, who was president of Argentina from 2007 and 2015, before becoming vice president in 2019.

The alleged fraud against the state cost the country’s coffers around $1 billion, Luciani said.

The former president has vehemently denied charges against her in the three-year trial and has said the judges already have the sentence against her “written and even signed.”

Fernández has characterized the trial as an effort to use the courts to stop her from ever holding elected office again and her allies have characterized it as a political prosecution.

The presidential office came out in support of Fernández, saying she is the victim of a “persecution by the courts and media.”

Luciani told judges they will have the final say on whether “corruption or justice” prevails.

Although Fernández has faced numerous accusations of corruption for events that took place while she was in office, this marks the first time a trial against the former president has gotten this far to include a prosecutor formally requesting a sentence.

Fernández, 69, is accused of leading a conspiracy that involved awarding 51 public works contracts for roadworks to Lázaro Báez in southern Santa Cruz province. Many of those public works were never finished.

Prosecutors say Báez, a former bank employee who went on to become a public works mogul, created the company Austral Construcciones as a way to win state tenders.

An additional 12 people are also indicted in the case, including Báez and Julio De Vido, the minister who was in charge of public works during Fernández’s administration.

A sentence is expected by the end of the year and could be appealed. 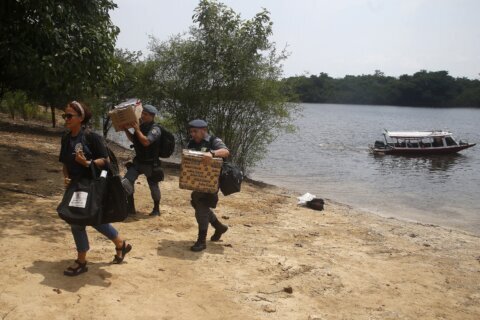