Leftist Sen. Gustavo Petro celebrated his first-round lead in Colombia's presidential election in the way most politicians would: in a conference room packed with hundreds of supporters as confetti rained down upon him.
Listen now to WTOP News WTOP.com | Alexa | Google Home | WTOP App | 103.5 FM

BOGOTA, Colombia (AP) — Leftist Sen. Gustavo Petro celebrated his first-round lead in Colombia’s presidential election in the way most politicians would: in a conference room packed with hundreds of supporters as confetti rained down upon him.

The man he’ll meet in a June 19 runoff had a different approach.

Rodolfo Hernandez sat at his home kitchen table and spoke to his followers for five minutes on Facebook Live.

The 77-year-old populist rode a wave of disgust at the country’s condition to what until just weeks ago would have been a shocking place in the runoff, surging late in the campaign past more conventional candidates.

He ran an austere campaign — unaffiliated with any major party — that was waged mostly on social media with a message that centered on reducing corruption and cutting wasteful government spending,

He is now positioned to mount a serious challenge to Petro —a former rebel who himself has long been seen as a political insurgent and who would be Colombia’s first leftist leader if elected. Petro now, to some eyes at least seems like the more conventional candidate — even if he still frightens much of the country’s conservative establishment..

Hernandez got 28% of the vote in the six-candidate field on Sunday while Petro, as polls had projected, got 40%.

Hernandez is a self-made millionaire who got rich in real estate after growing up on a small farm. He says he has paid for his campaign with his own savings rather than depending on donations.

Some in Colombia compare him to former U.S. President Donald Trump and describe him as a right-wing populist. But others say the analogy is deceptive.

“This is not a hard right-wing candidate” said Will Freeman, a Princeton University scholar who specializes in Latin American politics and met with Hernandez in February for a lengthy interview. “One of the big things he talks about is poverty, inequality and hunger. When I spoke with him he said several times that he was dismayed by the idea that people are born into poverty in Colombia and don’t have opportunities to get out of that track.”

Hernandez has also said he is in favor of peace negotiations with the National Liberation Army — the last remaining sizable rebel group — which kidnapped and killed his daughter in 2004.

Freeman said that during the interview, Hernandez also expressed admiration for two other Latin American leaders: Mexico’s Andrés Manuel López Obrador and El Salvador’s Nayib Bukele — both often seen as heavy-handed populists but neither of them coming from a right wing background.

Hernandez got his start in politics in 2016, by running for mayor of his hometown of Bucaramanga. He has said he was tired of complaining about corrupt local officials and was convinced by his brother, who is a philosopher, to try to change how the city was run himself.

Leading a movement called “Logic, Ethics and Aesthetics” — which had the pi symbol as its logo — Hernandez won, and eventually left office in 2019, with approval ratings above 80%.

But his mayoral term was also marred by an investigation into allegations he took kickbacks from a waste disposal contractor. Hernandez denies the accusations and is fighting them in court.

As mayor, Hernandez became famous for publicly scolding police officers who sought bribes and notorious for slapping a city councilman who accused his son of corruption. Hernandez was suspended for several months over the incident. He also caused an uproar by saying that migrant women from neighboring Venezuela had become “factories for breeding poor children.”

He astonished Colombians in 2016 when, in a radio interview, he professed to be an admirer of Adolf Hitler. He later apologized and said he had meant to say Albert Einstein — a bizarre confusion that actually made sense because the physicist was the source of the statement that Hernández had misattributed to the dictator during the interview.

But the scandals have not appeared to affect Hernandez’s standing with voters hungry for change in a country struggling to recover economically from the pandemic and to overcome persistent violence.

Inflation in Colombia is the highest in two decades, the poverty rate rose by 8% in 2020, and armed groups continue to fight in some rural areas over territory abandoned by the Revolutionary Armed Forces of Colombia after that group signed a peace deal with the government in 2016.

Many Colombians blame these problems on the conservative parties that have been ruling the country for decades. In Sunday’s election, Federico Gutierrez, the candidate backed by the nation’s traditional parties only got 22% of votes.

“The success of Hernandez and Petro is a harsh rebuke to the ruling class” said Sergio Guzman, director of the Colombia Risk Analysis consulting firm. “It also means that Colombians want a radical version of change.”

Guzman said that with just three weeks until the run-off vote, Hernandez is well positioned to win over voters who supported Gutierrez but fear Petro’s economic proposals, which include higher taxes, reforms to the pension system and more government spending. Gutierrez on Sunday said he would back Hernandez because he didnt’ want to “put Colombia’s future at risk.”

As a presidential candidate Hernandez has said he will cut government excesses, starting with a plan to turn the nation’s presidential palace into a museum. Hernandez has also said that he wants to sell buildings owned by Colombia’s diplomatic missions abroad to fund loans for Colombian students.

The candidate has railed against the nation’s ruling class and promised rewards for citizens who denounce corrupt public officials. He has also said that judges would have to present him with reports on how anti-corruption cases were advancing. And much like Petro, he has said that he wants to renegotiate Colombia’s trade agreements with other countries, in order to benefit local farmers.

Laura Gil a political scientist at Bogota’s Javeriana University said that many of Hernandez’s proposals are unfeasible and demonstrate he is a populist with “very little knowledge” of how government works.

“He is a Colombian Trump” Gil said, adding that if Hernandez wins he will take Colombia’s democratic institutions “to the limit.” 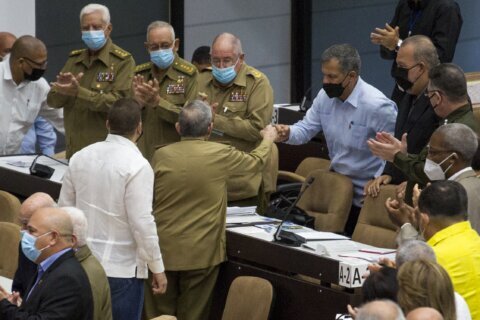