SAN JUAN, Puerto Rico (AP) — Federal agents arrested the mayor of one of the wealthiest cities in Puerto Rico on corruption charges Thursday, the second such case announced this month.

Guaynabo Mayor Ángel Pérez Otero faces three counts, including bribery and extortion. He is accused of regularly accepting payments of $5,000 in exchange for awarding contracts to the owner of a construction company.

The indictment alleges that the scheme ran from 2019 to 2021 and accuses the two of meeting in secret places and of using coded text messages.

No one answered the phone at his office on Thursday and it was not immediately clear if Pérez had an attorney. He was sworn in as mayor in August 2017 following a special election after the former mayor, Héctor O’Neill, pleaded guilty to sexual harassment, gender violence and violating an ethics law.

Puerto Rico Gov. Pedro Pierluisi said in a statement that he was disappointed and extremely upset about the arrest. He demanded that Pérez resign immediately as mayor and as president of Puerto Rico’s Federation of Mayors.

In early December, federal officials announced that former Cataño Mayor Félix Delgado pleaded guilty to conspiracy to commit bribery and receive kickbacks after he was accused of awarding 50 contracts worth nearly $10 million to an asphalt company.

U.S. Attorney Stephen Muldrow said that Radamés Benítez Cardona, the executive assistant of the mayor of Trujillo Alto, also was arrested on federal charges including bribery and extortion. He said Benítez is accused of receiving a $200,000 advance payment and more than $17,000 a month from a solid waste company in exchange for securing a government contract for them.

“This is just the beginning,” said Joseph González, special agent in charge of Puerto Rico’s FBI office. “Our work is not done.” 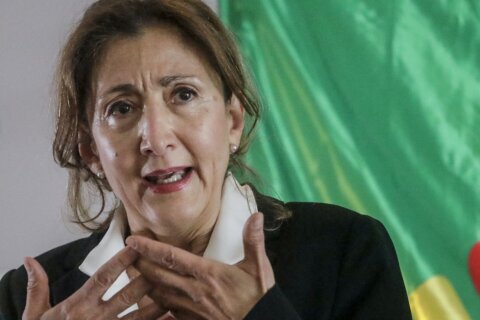 Waves from eruption in Tonga cause oil spill in Peru