MEXICO CITY (AP) — Mexican drug cartels are turning to bigger, more productive labs to churn out increasing quantities of synthetic drugs like meth and fentanyl, according to seizure figures issued Monday by the country’s Defense Department.

The defense secretary, Gen. Luis Cresencio Sandoval, acknowledged there has been a huge shift by Mexican cartels away from naturally grown drugs like opium and marijuana, where seizures and crop eradication has fallen.

Part of that increase was due to increased overall use of fentanyl, which Mexican cartels import from China and then press into pills or mix into other drugs.

“There was a change in consumption, there was a change in drug markets due to the ease of producing synthetic drugs,” Sandoval said. For example, cartels no longer have to pay farmers to grow opium poppies and painstakingly collect the opium past that oozes from the bulbs.

The change was reflected in a drop of more than 50% in the amount of opium poppy fields destroyed in the last three years. And with legalization of pot in many U.S. states, eradication of marijuana fields in Mexico also dropped by about half.

Sandoval said the number of drug labs raided fell from 287 in 2016-2018 to 203 over the last three years. But those that were detected were bigger, he added.

“The laboratories that have been discovered or seized in this administration have had larger capacities, which has allowed us to seize a larger quantity of methamphetamine products,” Sandoval said.

Mexico’s synthetic drug boom was illustrated last week when a trucker from Mexico was arrested after trying to smuggle record-breaking amounts of meth and fentanyl into the U.S.

More than 17,500 pounds (7,930 kilograms) of meth and 389 pounds (176 kilograms) of fentanyl were discovered Thursday hidden inside a tractor-trailer at the Otay Mesa border crossing in San Diego, according to a statement from the U.S. Attorney’s Office.

The seizures were the largest of either drug in the U.S. for both 2020 and 2021, the statement said.

Sandoval touted the increased seizures in Mexico as a sign of the government’s success.

But Mexican security analyst Alejandro Hope noted that “an increase in seizures can be a very bad sign.”

Mexican cartels press fentanyl into counterfeit oxycodone and other pills, which often contain lethal amounts of the synthetic opioid. That has caused about 64,000 overdose deaths in the United States over the last year.

Anne Milgram, the head of the Drug Enforcement Administration, told CBS’s “Face the Nation” that “the cartels are mass producing these pills in Mexico, mostly, and they’re making them look like they’re real oxycodone, like they’re real hydrocodone, Percocet, Adderall, and then they’re bringing them flooding into the United States and falsely advertise them, marketing them as though they were real pharmaceuticals.”

Waves from eruption in Tonga cause an oil spill in Peru 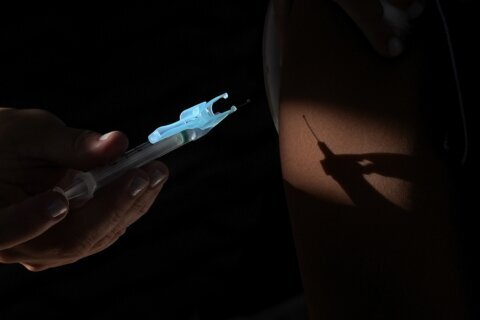