TEGUCIGALPA, Honduras (AP) — If Xiomara Castro’s wide lead in Honduras’ presidential election holds, her leftist government could present challenges, but also opportunities for a Biden administration that has struggled with how to work on the country’s problems while keeping current President Juan Orlando Hernández at arm’s length.

There will be some painful history to overcome, primarily the U.S. government’s initial sluggishness in calling the ouster of Castro’s husband Manuel Zelaya in 2009 what it was — a coup — and then proceeding to work closely with conservative National Party presidents who followed. And from the U.S. perspective, how Castro and Zelaya cozied up to then-Venezuela President Hugo Chávez.

Among the first to congratulate Castro on her success — even before Honduran electoral authorities — were the presidents of Cuba, Venezuela and Nicaragua, three of the hemisphere’s leftist authoritarians.

On Monday, State Department spokeswoman Jalina Porter urged “patience and calm” as votes are counted and expressed support for “the peaceful conduct of free and fair elections in Honduras.”

Over the course of her campaign, Castro sent signals that she is interested in working with the U.S. And Brian Nichols, U.S. assistant secretary of state for Western Hemisphere affairs, visited Honduras last week ahead of the elections, sending a message that U.S. remained interested in Honduras.

With just over half of polling place tallies counted, Honduras’ National Electoral Council said Castro had 53% of the votes to Nasry Asfura of the National Party’s 33%.

Common ground between Castro and the U.S. government exists in at least three key areas: immigration, drug trafficking and corruption. And with tense relations prevailing between Washington and the leaders of El Salvador and Guatemala, the U.S. government could use a productive relationship with Honduras.

Despite opponents’ efforts to paint Castro as a communist, experts expect her to govern as a centrist with a desire to lift up Honduras’ poor while attracting foreign investment.

A speech Castro made to her Liberty and Re-foundation party in June remains one her clearest expressions of how she will navigate the U.S. relationship.

“In the first 100 days, we will execute and propose to the administration of President Joe Biden and Kamala Harris a plan to combat and address the true causes of migration,” Castro said.

Castro describes Hondurans’ emigration in terms of flight to escape inequality, corruption, poverty and violence. That sounds a lot like Harris’ assessment of the root causes the Biden administration wants to focus U.S. aid on.

But Castro also puts some of the blame on the U.S. government.

“I believe the Biden administration has an enormous opportunity to address the issue of migration,” Castro said in the June speech. “First, recognizing that they have part of the responsibility for what happens in our country,” she added, noting the 2009 coup.

“I think Xiomara Castro understands much better than the United States that if you want to address the immigration question, you have to address root causes,” said Dana Frank, a Honduras expert and professor of history emerita at the University of California, Santa Cruz. “And that means having a functioning economy. It means having a functioning state.”

Poverty has only deepened since the start of the COVID-19 pandemic.

As the Biden administration looks for ways to spur investment, help develop Honduras’ economy and create jobs so fewer people will feel the need to flee, “some of her priorities could fit well into what the administration is hoping to do,” said Maureen Meyer, vice president for Latin American Affairs at the Washington Office on Latin America, a human rights organization.

Meyer cautions that it is less clear how a U.S. proposal such as creating a Honduran border patrol would be received by Castro. And in the same June speech, Castro also said she wanted to open relations with China, another potential point of friction with the U.S. government.

Castro has hammered the outgoing Hernández administration for corruption. It was Hernández’s administration that let the Organization of American States’ anti-corruption mission in Honduras expire in 2020 after its work had touched some of the National Party’s lawmakers for alleged misuse of public funds.

She has said she’s interested in having an international anti-corruption mission return to Honduras. That combined with a strong, independent attorney general, could begin to tackle one of the country’s most profound problems.

“One of the key priorities for the Biden administration in its cooperation internationally, but specifically in Central America, is the rule of law and anti-corruption efforts,” Meyer said. Castro’s interest in the subject could reopen a door that Hernández had shut.

U.S. federal prosecutors have put one strain of that corruption under the microscope in drug trafficking cases that have reached up to high-ranking Honduran politicians.

The most notable was the conviction of Hernández’s brother, a former federal lawmaker, on drug trafficking charges that earned him a life sentence in the United States. In his trial and other cases, U.S. prosecutors have accused President Hernández of fueling his own political rise with money from drug traffickers. Hernández has not been charged and has denied the accusations.

U.S. prosecutors have also accused Zelaya of accepting money from drug traffickers, which he has denied.

Castro is fond of referring to Hernández’s government as a “narco dictatorship.”

At the end of her speech to supporters Sunday night, Castro made clear she wants a clean break of the bonds between government and drug traffickers.

“Get out war! Get out hate! Get out death squads! Get out corruption! Get out drug trafficking and organized crime,” Castro said. “No more poverty and misery in Honduras.” 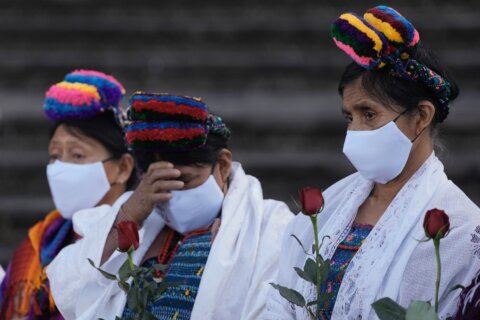