BUCARAMANGA, Colombia (AP) — The number of minors who risked their lives to cross the Darien Gap, the inhospitable stretch of land that separates Colombia and Panama, reached a record high between January and September, UNICEF revealed Monday.

The U.N. children’s agency said 19,000 minors faced the rigors of the jungle during that period. At least one in five of the migrants who walked the area, which is filled with wild animals and dotted with criminals, are children, of which half were under the age of 5.

“The rapid growth in the influx of children heading north from South America should be urgently treated as a serious humanitarian crisis throughout the region, beyond Panama,” Jean Gough, UNICEF director for Latin America and the Caribbean, said in a statement.

The number of migrant children in the Darien over the nine-month period almost tripled the total number of the last five years. The agency said 109 children were recorded crossing the area in 2017, and two years later, the figure increased to 3,956. In 2020, it dropped to 1,653 due to restrictions derived from the pandemic, which slowed the migratory flow.

Five children have been found dead in 2021, while another 150, including some newborns, arrived in Panama without their parents, according UNICEF.

The agency also warned that girls and adolescents are especially vulnerable to sexual violence in the Darien jungle. Twenty-nine complaints of sexual abuse were filed between January and September.

“Deep in the jungle, robbery, rape and human trafficking are as dangerous as wild animals, insects and a lack of clean water,” Gough said.

Meanwhile, some 20,000 other migrants — many of them in families — are still waiting their turn to cross the Darien, paused in Necoclí, a small coastal town in Colombia. Some of them stay in hotels while others spend nights under tents on the beach.

The economic crises in Latin America and pandemic-related restrictions led more than 67,100 people, the majority of them Haitians, to cross the Darien between January and August, according to the National Migration Service of Panama.

Most of the Haitian migrants come from Chile and Brazil, where they took refuge after the earthquake that devastated their home country in 2010, and many of the children who undertake the dangerous journey were born in those South American countries.

Now, they are trying to reach the U.S. despite the deportation of thousands of migrants in recent weeks.

Children crossing the Darien usually arrive in Panama with gastrointestinal illnesses due to untreated water or with respiratory ailments after spending days in the humid the jungle, sleeping in the open and crossing rivers. On the Panamanian side, organizations such as UNICEF provide health services and support. 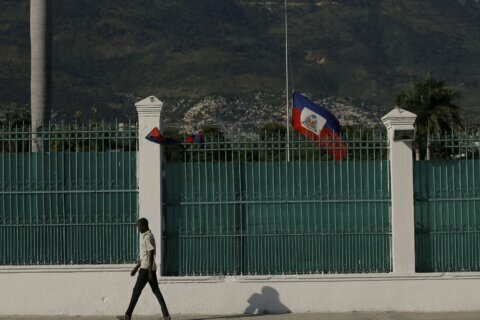