Without the sort of overwhelming show of force deployed by the United States and Texas on the north side of the border, Mexico has been ramping up efforts to relieve migrant numbers at this segment of the border.
Listen now to WTOP News WTOP.com | Alexa | Google Home | WTOP App | 103.5 FM

CIUDAD ACUÑA, Mexico (AP) — After more than a week at this crossing on the U.S.-Mexico border, Haitian migrant Nelson Saintil felt like the walls were beginning to close in on him and his family.

Saintil was along the banks of the Rio Grande on Wednesday morning with his wife and four children, ages 5, 10, 13 and 16. They had returned to Ciudad Acuña the day before after eight days in the squalid camp in Del Rio, Texas, where as many as 14,000 migrants had gathered.

Reports of U.S. deportations to Haiti had pushed them back to Mexico, but the situation remained fluid. The family constantly reevaluated its situation based on imperfect information.

“I don’t want to be like the mice who don’t know about the trap and get caught, because returning to Haiti is like being buried alive,” Saintil said.

At the same time, he and others feared straying far from the growing river camp on the Mexican side, because Mexican immigration agents continued picking up migrants around town and conducting overnight raids at the small hotels where some stayed. The threat of possible deportation on both sides of the border created the sensation of an open-air jail, he said.

Without the sort of overwhelming show of force deployed by the United States and Texas on the north side of the border, Mexico has been ramping up efforts to relieve migrant numbers at this segment of the border.

In Ciudad Acuña, patrols of National Guard, immigration agents and in some cases local police intensified Wednesday, with more raids and migrant detentions in hotels and in the streets.

Empty buses waited for detained migrants outside the local immigration offices. Suddenly, some buses would disappear and be replaced by others. Mexico’s National Immigration Institute has not provided numbers on how many migrants have been moved from Ciudad Acuña in recent days.

Well before dawn Wednesday, a couple of immigration vans pulled up outside a small hotel in Ciudad Acuña with National Guardsmen carrying rifles. Soon, shattered glass rained down from a second floor window and a woman screamed. Several migrants were led out with their hands secured behind their backs and loaded into a van.

Inside, an AP journalist found blood spattered on the tiled floor of the room in which they had been staying.

Bodlet Manaasse, 27, was the only migrant not taken from the hotel in the raid.

“I was sleeping, they knocked on the door and I didn’t open,” he said. “The owner opened it, and they told me, ‘you have to go with me’.”

They didn’t ask to see any documents, but he told them he was sick and had to see a doctor, showing his swollen belly. He was the only one they left, he said.

The rest of the hotel exploded in shouts, scuffles and breaking glass. One family tried to hide in the bathroom, but authorities broke down the door. A couple families wielded shards of glass to ward off agents and managed to dash out of the hotel with their children and run into the night.

One migrant accidentally cut himself with the glass, explaining the blood on the floor, said Manaasse.

The hotel manager, shaken by the event, would only say that he witnessed part of the action and had never seen anything like it.

On Tuesday, Mexico flew the first planeload of migrants from the border city of Piedras Negras — just downstream from Ciudad Acuña — to the southern city of Villahermosa. More flights were expected, including to Tapachula, near the Guatemala border.

At the same time, Mexico was trying to keep more migrants from reaching the northern border. Bus lines were reminded not to sell tickets to migrants without proper documentation. On Monday, immigration agents in the northern city of Monterrey, a key transportation hub for travel to the border, detained about 100 migrants at the bus station who were then flown to Tapachula.

In Monterrey, the number of Haitian migrants arriving at a local shelter had grown exponentially since Sunday.

Some 1,500 Haitian migrants had arrived to the shelter since Sunday. The shelter, which has a capacity of 700, has expanded outside with tents for the overflow.

“The wave started with the deportation from from the United States, which has been done inhumanely,” said José Jaime Salinas, administrator of the Casa INDI shelter. “It is the new United States president’s first error, because this is being seen around the world.”

Selomourd Menrrivil, 43, left Tapachula to head to Monterrey with his family after seeing the situation developing in Ciudad Acuña and Del Rio. He and his wife arrived in Monterrey Sunday with their two teenage daughters.

Their plan is to regularize their status in Mexico and find work, even though he conceded that their ultimate destination remains the United States.

“Without work we can’t do anything,” said the Cap-Haitien native who lived for five years in Santiago, Chile before heading north. “We want documents here.”

Mexico’s immigration agency estimated Wednesday that 3,300 migrants were still on the Del Rio side and 500 to 600 were in Ciudad Acuña. That was down from the 8,600 that Texas Gov. Greg Abbott reported Tuesday and from the more than 14,000 estimated five days earlier.

Mexico plans to begin direct flights to Haiti, which would initially target Haitian migrants already in Mexico’s detention centers who have not applied for asylum. Those with open asylum cases would be flown or bused to Tapachula, according to a federal official who spoke on the condition of anonymity.

Andres Ramírez, coordinator of the Mexican Commission for Refugee Assistance, told Milenio television Wednesday that “we have had a quantity of people applying like never before in the history of Mexico.”

From January to August, the agency received more than 77,000 applications for asylum, already 10% above the previous record in 2019, he said. About 19,000 of those came from Haitians.

Dozens of Haitians waited outside the offices of the agency in Mexico City with a seemingly new urgency to legalize their status in Mexico.

Leon Cardin, a 30-year-old plumber, waited with his wife and 1-year-old son. They arrived Wednesday morning from Tapachula. He said he paid about $750 for them to travel from Tapachula to the capital on a bus and in a private vehicle.

Cardin had been in Tapachula for more than a month, but the commission cancelled his appointment to apply for asylum, so they decided to come to Mexico City. He left Haiti in 2019, passing through Chile, Bolivia, Peru, Ecuador, Colombia and all of Central America before arriving in Mexico.

Cardin had seen what was happening at the border — his son’s godfather was expelled by the U.S. to Haiti — and wants to make sure he can’t be sent back to Haiti.

Like others, though, he said he would one day like to make it to the United States.

“But we’re not lucky now. We’re obliged to stay here and seek a visa and try to find work here,” he said.

Back in Ciudad Acuña, little by little the migrant camp was growing beside the Rio Grande. Small tents and tarps were sprouting to provide shelter for several hundred migrants, mostly families, in a scene reminiscent of camps that have appeared in other border cities like Matamoros, Reynosa and Tijuana in recent years.

Antonio Pierre, 33, listened to the news on a friend’s cellphone.

“They are releasing some, but they are very few,” he said. His wife and daughter were across the river in Del Rio. He had waded back across the river through waist-deep water just to charge his cellphone, but said it was possible the whole family would join him in Mexico before the day was through. 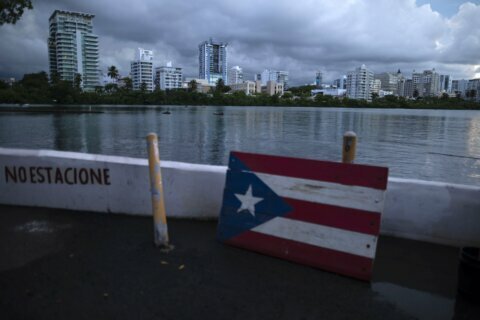 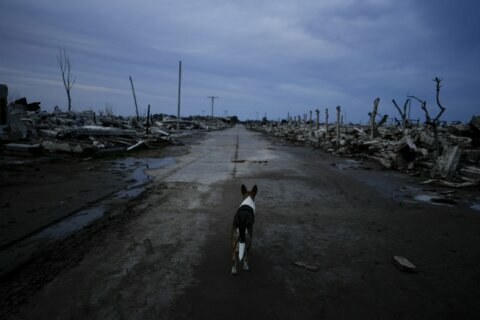