At least 1 dead, 10 missing in landslide near Mexico City

Rescuers planned to resume the search Saturday for victims of a landslide that brought tons of massive boulders down on a steep hillside neighborhood outside Mexico City, killing at least one person and leaving 10 missing.
Listen now to WTOP News WTOP.com | Alexa | Google Home | WTOP App | 103.5 FM
(1/1) 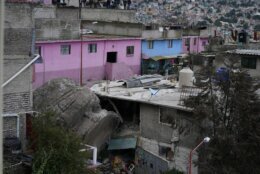 TLALNEPANTLA, Mexico (AP) — Rescuers planned to resume the search Saturday for victims of a landslide that brought tons of massive boulders down on a steep hillside neighborhood outside Mexico City, killing at least one person and leaving 10 missing.

The operation is complicated by the sheer size of the rocks that cleaved from the peak known as Chiquihuite Friday afternoon, the narrow paths of the neighborhood largely inaccessible to heavy machinery and the worrisome instability of the exposed mountain face looming above.

The landslide in Tlalnepantla in Mexico state followed days of heavy rain in central Mexico and a 7.0-magnitude earthquake Tuesday in Acapulco that swayed buildings 200 miles away in the capital. Mexico state Gov. Alfredo del Mazo said Friday night that both factors likely contributed to the slide.

Neighborhood residents immediately started to dig for their neighbors Friday. They formed lines across the towering debris pile, passing 5-gallon buckets of debris and individual rocks down.

Francisca Trejo, 57, rested near the pile wearing a pair of dirt-stained gardening gloves. “It sounded like when a truck dumps rocks, but for a long, long time,” she said.

Marcelo Israel Sánchez, 39, waited in his home for authorities to tell him what his wife and three children should do. He did not want to leave the house until the area was secure, but also feared the potential for additional slides. More than 80 surrounding homes were evacuated in case more of the mountain came down.

“The earthquake felt strong and probably because of that came the rock slide,” Sánchez said.

Authorities pulled rescuers off the pile after dark due to the risk of more falling rock.

“We don’t want to anyone to take additional risk,” said Ricardo De La Cruz, Mexico state’s deputy interior secretary. “The geologists have told us that the landslide is complicated. We have made flights with drones and we don’t want to put anyone in danger.”

The priority Saturday was to stabilize the slope and continue the search, he said.

The likelihood of finding survivors was falling because rescuers had been over the site with dogs and sensitive equipment “and we haven’t detected anything,” De La Cruz said.

“The image was terrifying,” said Alan Hernández, a member of the Topos Mexico K-9, or “Mexico Moles K-9,” rescue brigade. He searched with his dog Oreo, a rescue expert that had participated in the search at the Surfside, Florida condo collapse. In Tlalnepantla Friday, Oreo had not found anyone.

On Friday afternoon, rescuers had carried a body on a stretcher covered with a sheet past AP journalists. The Mexico state Civil Defense agency said in a statement that at least 10 people were reported missing.

Isaac Carmona, 18, a neighborhood resident who lived a few houses away from the slide came to help Friday. He saw a woman carried away from the pile alive on a stretcher with a bloody face.

A Mexico state spokesman confirmed there had been one rescue.

Officials: Many Haitian migrants are being released in US