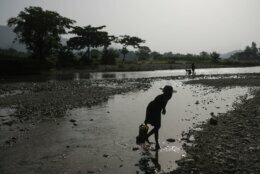 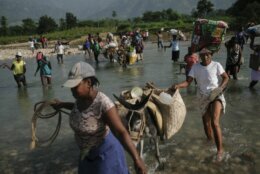 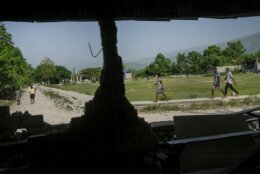 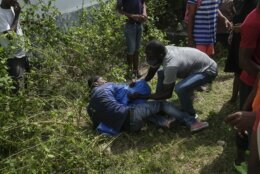 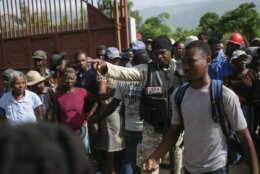 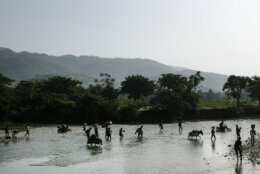 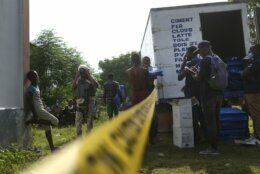 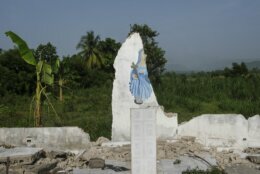 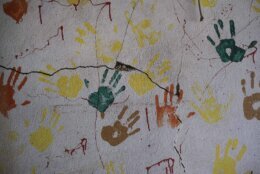 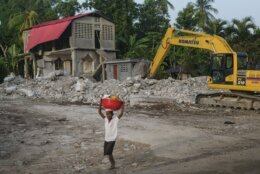 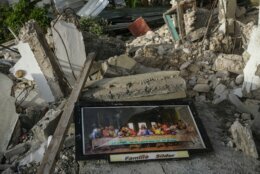 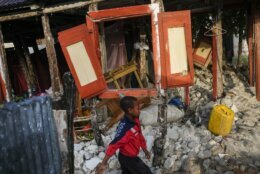 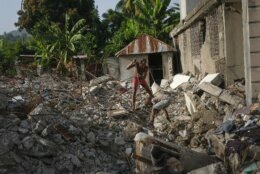 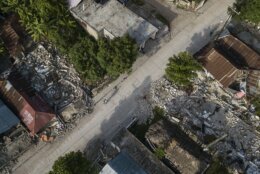 MANICHE, Haiti (AP) — At the edge of a pile of rubble, Michael Jules plunged an iron bar over and over into the crumbling concrete of his grandmother’s home. A younger cousin squatted at his feet, pulling away debris with a trowel.

It was Jules’ third day working the spot like an archaeologist, removing layer upon layer of rock. He had established more or less the perimeter of his room. On Tuesday morning he uncovered a corner of his mattress.

While Jules, 21, toiled with hand tools, and at times his bare hands, just down the street heavy-duty earthmovers cleared lots, depositing entire homes into dump trucks or scraping collapsed dwellings into neat piles. For some victims of Haiti’s Aug. 14 earthquake, the necessary prelude to rebuilding has begun.

Joseph Gervain, another of Jules’ cousins, watched from the street. He lived in a house behind that was also damaged. He wondered how the earthmovers decide which lots to clear and which to pass.

“I see people removing debris, but I don’t know what the conditions are,” Gervain said. “Maybe they pay to have the debris removed. I see they skip houses. Someone is giving orders about which house to remove debris from.”

The machines bore the logos of nongovernmental organizations, but who they helped appeared to be guided by Maniche’s mayor.

Jean Favard watched one of the large yellow machines push away the rubble of his vacation home just up the street from Jules’ grandmother’s house. No one had been living at Favard’s home and he said he planned to rebuild once it was cleared.

Meanwhile, Gervain said he had no idea what his family would do on the lot where a two-story house with eight bedrooms — home to 12 people — had been reduced to a one-story pile of concrete and twisted rebar.

Jules kept digging. His goal was twofold: his clothes — he was wearing only borrowed Spider-Man boxers — and his passport.

“I have not found anything yet,” Jules said.

Maniche is a teeth-rattling hour’s drive from paved road, over a mountain pass and settled in a wide, green valley. The town lost 80% to 90% of its homes, according to preliminary estimates. Piles of rubble like Jules’ grandmother’s house dot every street.

Even most of those houses still standing will have to be torn down.

Relatively undisturbed appeared to be Maniche’s riverside market. Even on a Tuesday — market day is Saturday — farmers from surrounding areas crossed the river carrying sacks of beans and peanuts atop their heads. Mules splashed through the water, their woven panniers laden with heavy bunches of plantains.

Gervain, Jules’ cousin, said it was lucky the earthquake occurred on a Saturday because most people were outdoors, at the market.

Jules was not. He had to run out of the house when the magnitude 7.2 quake struck. Now he was desperate to find his passport because he is a professional soccer player for the Haitian League club America des Cayes.

“I need to have my passport if I need to travel with the club for a tournament to the Dominican Republic or Cuba,” Jules said, though such games will have to wait: The current season was suspended due to the COVID-19 pandemic.

Well out of uniform and standing atop a rubble pile, the right fullback was still immediately recognized by a fan.

“You’re from here?” the man, a motorcycle taxi driver from Les Cayes, asked in disbelief. “I didn’t know you were from Maniche.”

Help was slowly arriving to in the town of about 20,000 people.

Philemon Charles, a carpenter, said the top necessity was shelter. His family had been sleeping outside their damaged home for more than a week.

By the time the punishing sun chased Jules from the rock pile Tuesday, he had managed to remove his twin mattress. More crumbling concrete immediately fell into the temporary void he’d just created.