US calls on Nicaragua to free opposition figure Chamorro

The U.S. State Department on Friday called on Nicaragua to free opposition figure Cristiana Chamorro, who is being held incommunicado at her home after her laptops and cellphones were taken away.
Listen now to WTOP News WTOP.com | Alexa | Google Home | WTOP App | 103.5 FM

MANAGUA, Nicaragua (AP) — The U.S. State Department on Friday called on Nicaragua to free opposition figure Cristiana Chamorro, who is being held incommunicado at her home after her laptops and cellphones were taken away.

Chamorro is a potential presidential candidate in the Nov. 7 elections and the daughter of former President Violeta Barrios de Chamorro. Her detention is the latest in a series of moves by President Daniel Ortega that his critics say are to prevent candidates from running against him in his re-election bid.

On Tuesday, the government charged Chamorro with money laundering involving alleged financial irregularities related to the Violeta Barrios de Chamorro Foundation for Reconciliation and Democracy, which she headed. The nongovernmental group is named after her mother. The State Department called for the release not just of Chamorro, but of two foundation employees as well.

“Their detention on trumped up charges is an abuse of their rights, and it represents an assault on democratic values as well as a clear attempt to thwart free and fair elections,” according the U.S. statement.

“Ms. Chamorro’s arrest comes amid unrelenting attacks on pro-democracy presidential candidates and independent media. The Ortega regime has pledged to bar Ms. Chamorro from participating in November elections and, in May, baselessly canceled the legal status of two opposition political parties.”

On Wednesday, police raided the home and placed Chamorro under a form of house arrest, and a court granted a request from prosecutors to bar Chamorro from running in the Nov. 7 elections or holding public office, citing the charges against her.

She was expected to challenge Ortega for the presidency.

Chamorro has said the allegations were trumped up to keep her out of the race.

In January, she stepped down from her role at the foundation. A month later, it closed its operations in Nicaragua after passage of a “foreign agents” law designed to track foreign funding of organizations operating in the country.

Nicaragua’s Supreme Electoral Council and congress have been narrowing the maneuvering space of the country’s opposition. In May, the council cancelled the legal status of the Democratic Restoration Party, which was expected to potentially be a vehicle for an opposition coalition bid against Ortega.

Cristiana Chamorro’s mother beat Ortega to win the presidency in 1990 and served until 1997.

Her husband, Pedro Joaquin Chamorro, had run his family newspaper La Prensa and was jailed and forced into exile multiple times by the dictatorship of Anastasio Somoza. He was eventually assassinated in 1978. Cristiana Chamorro is the vice president of La Prensa. 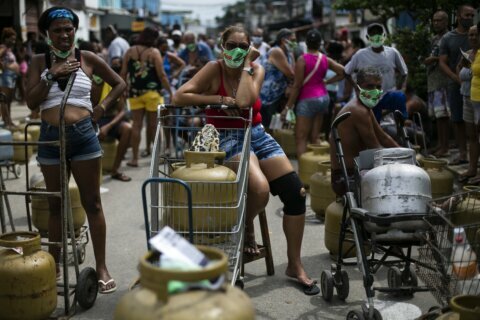 Brazil scrambles to help the poor, while they barely hang on