‘Girl from Ipanema:’ Re-imagining a classic for today’s Rio

RIO DE JANEIRO (AP) — Chauffeured in a classic Porsche, the Brazilian beauty steps out into 1960s Rio de Janeiro. The pastel pastiche is easy on the eyes, and so is the pin-up girl tracing twirls as a guitar strums the city’s hymn: “The Girl from Ipanema.”

Then the bass drops, and the viewer is whisked ahead to the present day — and the decidedly B-side of town.

“Let me tell you ‘bout a different Rio / The one I’m from, but not the one that you know,” Brazil’s biggest pop star, Anitta, sings over a trap beat. The music video has her descending, bikini-clad, from a bus to an artificial pool beside Rio’s international airport.

It’s the latest twist on the placid Bossa Nova song that, more than a half-century after its creation by Antônio Carlos Jobim and Vinicius de Moraes, still isn’t played out — and continues to feed foreigners’ captivation. The girl from Ipanema’s journey – from Rio to the United States and back to Rio again – shows what can change, and also what endures, as culture crosses borders in an age of globalization.

Anitta’s “Girl from Rio” retains only the melody from the original track. Her lyrics convey reality: that the city’s women have fuller figures than the tall and tan one about whom Frank Sinatra crooned. Its video features a beach barbecue and bleached body hair, plus no shortage of booties and deep kissing, and mostly casts Black stand-ins for the original muse.

The new take is a long way from Rio’s golden age of glamour, an era when Brazil was churning out Volkswagen Beetles and on track to its second straight World Cup title.

It was the early 1960s. Rio had just lost its status as the nation’s capital, but nobody could steal the picturesque Copacabana and Ipanema beaches that served as backdrop for the Bossa Nova music movement — and the locale where Jobim and de Moraes, a composer and a poet respectively, often saw their muse walking while they sat by a bar’s window.

“There really is a secret — an enchantment,” says de Moraes’ daughter Georgiana, who sometimes performs “The Girl from Ipanema.” She’s heard it countless times, she says, yet somehow it never spoils.

Trouble arose when it came time to translate the song to English. Lyricist Norman Gimbel strongly opposed the word “Ipanema,” which he thought called to mind Ipana, the now-forgotten toothpaste brand. In comments published in Jobim’s biography, “Cancioneiro Jobim,″ the Brazilian recalled arguing with Gimbel in a Manhattan taxi. Even the cabbie whirled around to take Gimbel’s side.

“All I wanted was to pass along the spirit of the girl from Ipanema, that poetic Rio thing. I think we managed a little, but it was an ugly fight,” Jobim wrote. “Americans will never understand our ‘beach civilization.’”

Translating from a Romance language, whose words end in soft vowels, saps some of the soothing sway, according to Jobim’s son Paulinho, a musician.

But the English lyrics tweak the scene, too, said Sérgio Augusto, who wrote “Cancioneiro Jobim” with access to the artist’s writings. In Portuguese, a passing girl lifts the spirits of a lonely man admiring the fleeting beauty she brings to the world. In English, a pining man bemoans unrequited love from a girl who won’t give him so much as a glance.

“There’s a big difference,” says Augusto, “between indifference and disdain.”

And the English lyrics, especially, could be received as unseemly by a modern audience more attuned to unwanted male attention. Brazilian guitarist Toquinho, who played alongside de Moraes for years, in 2019 questioned whether even the original would’ve been rejected today.

Gimbel was one of many “professional American lyricists who put English lyrics to foreign songs without knowing what they meant, and wound up earning more than the original authors,” Castro said in an email.

“But,” he added, “that’s how the system worked, and it’s clear that, without English lyrics, those songs never would have broken through American provincialism.”

“The Girl from Ipanema” didn’t just break through; it became a smash hit, which led Brazil to treasure the original.

That, Anitta says, is why she decided to set “Girl from Rio” to English lyrics. In an interview from Miami, she said that garnering a seal of approval abroad helps Brazilians value their own music.

By scrubbing “Ipanema” from the lyrics, Anitta already succeeded where Gimbel failed. She secured the blessing of the artists’ families, who reviewed her version before granting approval. Instead, she gives a shout out to her home ‘hood, Honorio Gurgel. It hardly rolls off the tongue, but it sure doesn’t sound like toothpaste.

Four members of the Jobim and de Moraes families told The Associated Press that they appreciated Anitta’s spin on the classic. Georgiana de Moraes said her late father was ahead of his time, always experimenting with younger partners. She said he would have liked it, too.

Before the song’s April 30 release, a photo of Anitta posing in front of the bus from the music video went viral, and thousands of Brazilians photoshopped themselves in her place. According to Lucas Brêda, a music critic at newspaper Folha de S.Paulo, that showed they felt seen and represented.

Her video also resonated, Brêda says. It racked up 24 million views on YouTube. But he says the song is more akin to contemporary American pop than anything Brazilian-born. Anitta also released a remix with rapper DaBaby on May 21. It’s a bit of history that repeats Bossa Nova’s Americanization.

“In the export of Bossa Nova, it became more distant from samba and closer to jazz,” Brêda says. “Anitta is doing that consciously, has no shame in doing that.”

She has performed her song on the Today Show  and Jimmy Kimmel Live, providing Americans a new vision of Rio women by supplanting the original’s inspiration, a 17-year-old named Helô. De Moraes described her in a 1965 magazine:

“A golden girl, mixture of flower and mermaid, full of light and grace, but the sight of whom is sad, because she carries with her, on her way to the sea, the feeling of youth passing by, of beauty that isn’t just ours. It is a gift from life in its beautiful melancholy of constant ebb and flow.”

Today, that woman, the original muse for “The Girl from Ipanema,” is 75 and among the small percentage of Brazilians fully vaccinated against COVID-19. Her name is Helô Pinheiro. She, too, enjoys the bounce of Anitta’s beat in the new version of the tune that changed her life, and recalled how de Moraes viewed her back then.

“That sense of youth that passes — it’s only today I can have that feeling, because I’m no longer a girl,” Pinheiro says. “Maybe Anitta precisely understood that ‘ebb and flow,’ and she flowed within what Vinicius already envisioned for the future, which is now.” 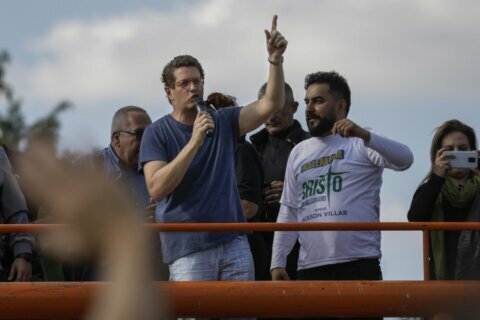