BUCARAMANGA, Colombia (AP) — Doris Tejada last heard from her son on New Year’s Eve 2007. Óscar Alexander had left her home in central Colombia to travel to a city on the border with Venezuela to earn money selling clothes to help his family after losing his job as a surveyor’s assistant.

Four years later, Tejada said, she felt a chill of premonition while watching a news report on television in which a group of Colombian mothers blamed the military for the murders of their missing children.

“What is happening with their children is the same that is happening to us,” she said that night to her husband, Darío Morales. “They say it is a false positive. I don’t know what that is.”

Tejada and Morales later found out that their son indeed was on the list of the “false positives,” victims of extrajudicial executions by soldiers who claimed they were guerrillas killed in combat during the country’s internal conflict, which largely ended with the 2016 demobilization of the Revolutionary Armed Forces of Colombia.

Military members could claim rewards for presenting results — or bodies — in the fight against armed groups.

Relatives of the victims, alleged to number in the thousands, say the investigations into the false-positive killings are not progressing as they would like. More than 10,700 people are under investigation in the ordinary justice system, most of them military members, but only 1,740 of them have been convicted, according to a 2019 report of the Prosecutor’s Office.

The office did not respond to requests for comment from The Associated Press about the investigations.

In the false positives scandal, as some military members have acknowledged, innocent men were taken to distant places by means of deception, killed and then made out to be criminals defeated in combat.

The case of Tejada’s son Oscar, who was 26 years old when he disappeared, was accepted in the Special Jurisdiction for Peace, the court in charge of judging the facts of the bloody and long-running internal conflict. She has joined the Mothers of Soacha, a group made up of mothers, wives and sisters who demand justice in 20 of the cases.

The Mothers were the first to denounce extrajudicial executions during the presidency of Alvaro Uribe, which lasted from 2002 through 2010. Tejada, 70, is the only one who has not found the remains of her son.

“I feel powerless, as my strength is already lacking because I have not been able to recover my son’s body after 13 years and give him a Christian burial, as every being deserves,” she told the AP through tears.

The scandal flared anew in February, when the Special Jurisdiction for Peace revealed that the number of extrajudicial executions carried out between 1988 and 2014 was 6,402, almost triple what the Prosecutor’s Office had reported. The Special Jurisdiction told the AP that figure could increase because its investigation is ongoing. The court will make public its first accusations against members of the security forces in the coming months.

Seventy-eight percent of the extrajudicial killings happened between 2002 and 2008, according to a report from the court.

Uribe has said the new figures are based on information from nongovernmental organizations that opposed his government and he defended his hardline policy of “democratic security” that weakened the guerrillas and killed some of their most important leaders.

“There is not a single military man who can say that he received from me a bad example or an undue insinuation,” Uribe said in a statement released Feb. 18. He said 27 soldiers were suspended during his presidency for irregularities in the application of protocols. Some of them were sentenced to up to 50 years in prison.

However, the director for the Americas of Human Rights Watch, José Miguel Vivanco, told the AP that the measures Uribe mentioned started in 2006 when “a lot of murders had already occurred.”

Vivanco added that Uribe removed the soldiers in 2008, after complaints from the press, but “until then, Uribe always chose to believe the lies of the military and turn a deaf ear to reports of human rights violations.”

Uribe did not immediately respond to a request for comment from AP.

The signing of the peace agreement with the FARC opened the possibility that 2,000 soldiers could give their version of the armed conflict to the Special Jurisdiction for Peace, before which ex-guerrillas also appear. Unlike the ordinary criminal justice system, it does not lead directly to a prison sentence, though it can result in a temporary penalty.

Some soldiers have reported threats against them for testifying in the case, and the government has granted them some security measures.

The peace court has been rejected by a sector of Colombian society, led by Uribe, that believes true justice cannot exist without the ex-rebels spending time in prison for committing crimes against humanity. Current President Iván Duque is Uribe’s political protege.

After learning the new number of false positives, Duque’s government asked the special court to verify the data and identify all the victims.

Tejada has the face of her son tattooed on her right arm. She said she trusts the Special Jurisdiction for Peace more than the ordinary justice system, where Oscar’s case has been stagnant since 2016, and is determined to find his body. But the coronavirus pandemic has further complicated her efforts.

In July, excavations to bury people who died of COVID-19 turned up mass graves in the area where authorities indicated her son had been killed. A human rights organization intervened and requested that the plot of land be protected.

“Oscar is a wonderful being who has given me enormous strength to keep looking for him. I long to find him and all the bodies that are in that grave,” Tejada said. 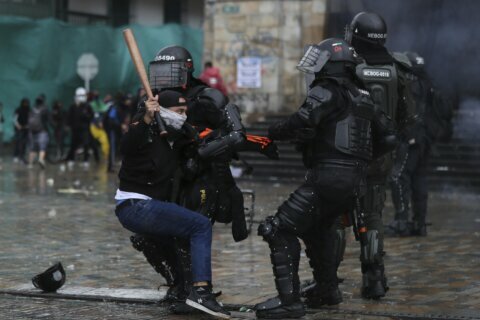