MEXICO CITY (AP) — The Cerro de Estrella was a barren hilltop of sun-faded grass with three towering but empty wooden crosses on Good Friday, a day when for nearly all of the past 176 years it would have been crowded with multitudes of people witnessing a reenactment of the Passion of Christ.

For almost two centuries the ceremony has been an economic boon for the sprawling borough of Iztapalapa. With more than 2 million people attending before the pandemic, it had provided a badly needed source of income for a working-class area that rarely shares in the tourism drawn to the rest of Mexico’s capital.

Standing near the summit, 18-year-old Juan Carlos Martínez said he was sad and angered by the decision to cancel the vast religious ceremony for a second year in a row due to the pandemic, in a country where test-confirmed COVID-19 deaths amount to more than 200,000 and untested victims boost that toll to over 320,000.

“Something important has been taken from us,” he said.

The pandemic has ravaged Mexico’s economy, which saw an 8.5% contraction last year, one of the worst ever, due to forced closures and a lack of spending programs to compensate for the blow. Officially, some 2.4 million people have been added the ranks of the unemployed, and many who still have jobs are struggling to get by.

The pandemic has forced as many as 9.8 million into poverty. The number of people with poverty-level incomes now includes more than half the population.

On Friday, a group of street venders were gathered at an exit to the Iztapalapa metro station, normally a key point of commerce. They were not happy about the unusually empty streets.

“I can’t make it another year without working,” said José Fidel Serrano, whose family of 10 operates open-air amusement park rides.

His face obscured by a blue mask, Serrano, 44, said his savings has lasted for the first four months of shutdown, enough to support his son and wife, who had lost a leg due to diabetes. After that, he took odd jobs as a painter, welder, driver, and he accepted donations from friends for food and household expenses.

“The situation is very chaotic now,” he said. “I feel horrible.”

On a normal Good Friday, the borough’s central plaza would be packed. This year, “we’re terrified that it is still so lonely,” said María Luisa Aranda, who owns a small food stand there, as she held the head of her 8-year-old daughter.

Aranda, 52, said she’d only been making about $50 a week, which she said wasn’t enough to feed her family and pay the rent.

“This is going from bad to worse,” she said. “I don’t see progress on any side. The pandemic has made everything worse.” 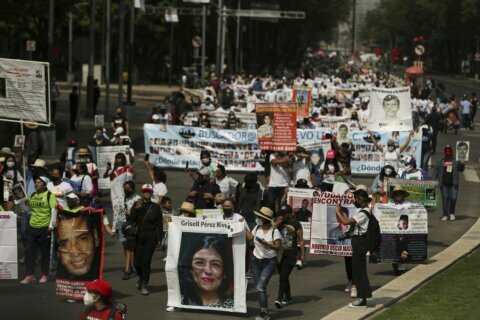 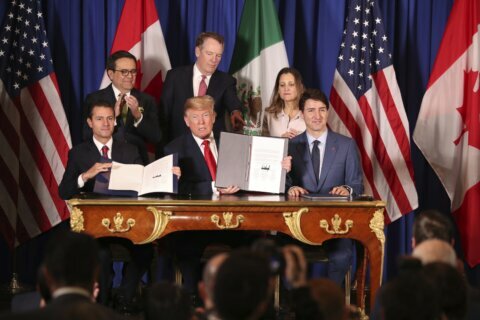