BOGOTA, Colombia (AP) — New evidence indicates most of the 24 inmates killed during a prison riot in Colombia’s capital earlier this year over fears that crowded, unhygienic conditions would fuel a virus outbreak were shot to death intentionally, according to a report released Tuesday by Human Rights Watch.

The organization said autopsy reports it commissioned from independent forensic experts shed light on one of the deadliest prison uprisings in the nation’s recent history.

The Independent Forensic Expert Group and the International Rehabilitation Council for Torture Victims concluded that none of the dead were shot in a way that indicates whover fired only wanted to injure them.

“Most of the gunshot wounds described in the autopsy reports are consistent with having been produced with the objective of killing,” the experts found.

The report does not determine who fired in the chaotic moments of the March 21 uprising, but it raises new questions about compliance with international human rights law and the importance of a thorough investigation.

“This new report is based on official documentation pointing to the intentional killing of detainees, yet there is little sign of progress in the investigation,” said José Miguel Vivanco, Americas director at Human Rights Watch.

The Colombian attorney general’s office did not immediately respond to a request for comment. In the past, prosecutors have said they are continuing to interview witnesses but have not yet charged anyone in the deaths or injuries.

The riot at La Modelo prison happened in the early months of the pandemic when case numbers were still low but fears increasingly high. Prison advocates said the inmates organized a nationwide protest to draw attention to their dire conditions: prisoners housed six to a cell, sleeping in the hallways, with no effort to isolate inmates with conditions that made them especially vulnerable to the disease.

Prisoners said it was intended to be a peaceful protest.

But videos taken by those inside painted an unruly scene, with inmates yelling from outside their cells and the sound of gunfire piercing the air.

Justice Minister Margarita Cabello initially described the events as an attempted prison escape, though that account was refuted by activists. She will become Colombia’s new inspector general in January – a move that Human Rights Watch says raises serious concerns about conflicts of interest in ensuring a thorough probe.

According to international human rights law, governments must protect the lives of those in custody and quickly investigate any deaths.

Andrea Benitez’s 30-year-old uncle was among those injured in the upheaval. She said he was shot in the arm and lost so much blood that he arrived at the hospital unconscious. He has permanently lost use of the limb.

It took the family several days to track down his whereabouts and while they have been working with an attorney, thus far they’ve gotten few answers. Her uncle suffers from mental health issues and hasn’t provided them any details either.

She is not hopeful that anyone will held accountable.

“Here in Colombia it’s difficult,” she said. “That’s a waste of time.” 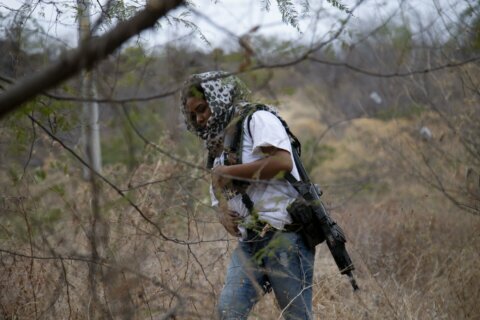