CARACAS, Venezuela (AP) — Venezuelan authorities have released an opposition politician to home detention two years after being jailed on suspicion of taking part in a failed drone attack on President Nicolás Maduro, his family said Friday.

Images on social media showed Juan Requesens arriving home where his relatives greeted him with emotional embraces. His sister, Rafaela Requesens, said on Twitter that he had been released to home detention, which didn’t go far enough.

“Although today my brother will be able to sleep in his house and in his own bed, there are many innocent Venezuelans who can’t do this,” she wrote. “We’re not going to stop fighting for them.”

The Caracas-based prisoner rights group Foro Penal reported that by the end of July, 382 people opposition leaders it considers political prisoners were being detained in Venezuela. They include other lawmakers and military officials, the group says.

Venezuelan authorities have not commented on the terms of Requesens’ release or explained what sparked the decision to move him to house arrest. Officials in the past have taken prisoners on house arrest back to jail, giving no explanation.

Venezuelan security forces arrested Requesens, 31, days following the August 2018 attack when two drones detonated at an outdoor military ceremony out of range of Maduro, who was not injured.

Requesens was a student leader before being elected to Venezuela’s National Assembly in 2015.

Relatives and political allies of Requesens say he’s guilty of nothing more than being an outspoken critic of Maduro’s repressive regime that has led to the once-wealthy nation’s economic and political collapse.

The United Nations High Commissioner for Human Rights, Michelle Bachelet, welcomed Requesens’ release. She has been critical of Maduro’s brutal tactics over Venezuelans, including its opposition lawmakers.

“This decision is a very positive gesture,” Bachelet said. “I encourage the authorities to continue taking similar measures that contribute to improving the human rights situation in the country and that allow progress in the political dialogue.”

Venezuela is gripped by an economic crisis that has sent more than 5 million fleeing in recent years, escaping scarcities of basic goods and soaring inflation that has left many struggling in poverty.

Juan Guaidó, a fellow opposition leader, has led a campaign backed by the United States and dozens of other countries to oust Maduro, who remains in power with backing from the military and international allies like Russia, China, Cuba, Turkey and Iran.

“We won’t rest until every political prisoner is free, every single accomplice to the dictatorship has been tried and every victim receives justice,” Guaidó said on Twitter, also extending a virtual hug to Requesens. “We know that his home arrest is far from freedom, but we will get justice.” 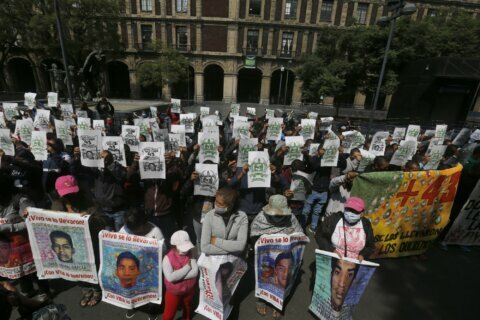