NOVO PROGRESSO, Brazil (AP) — Dozens of Indigenous people, many daubed in black paint representing their grief and fighting spirit, blocked a major highway in Brazil’s Amazon on Monday to pressure the government for help in protecting them from COVID-19.

The Kayapo Mekragnotire people blame authorities for the deaths of four of their elders and infections of dozens more on their land in southern Para state, near the city of Novo Progresso. Leaders said people from outside their territory spread the new coronavirus among them because there were no restrictions on entry to their land.

About 400 Kayapos Mekragnotire people live in 15 separate groups in the region.

They claimed to have few doctors, scarce personal protective equipment and no nearby intensive care unit beds for COVID-19 patients. They wore headdresses of yellow, green and blue feathers, and brandished bows, arrows and clubs. Some had colorful beads, armbands and headbands of Brazilian soccer clubs.

They said they will keep their logs and tires spread across the road until federal authorities come to negotiate.

Protesters received some masks after blocking the road, but few seemed to know how to wear them. Alexandra Santos, an agent of the state-run Indigenous health care system SESAI, said the Kayapos Mekragnotire people are being taught how to protect themselves from the virus. She took their temperatures, but didn’t have coronavirus tests immediately available.

Brazil’s health ministry says the virus has infected nearly 20,000 Indigenous people and killed at least 338. Experts believe both figures are largely underestimated. A count by non-profit group APIB, based on official stats and information from leaders, says more than 25,000 Indigenous have been infected nationwide and 678 killed by the virus.

Tens of thousands of Brazilians are confirmed to have died nationwide from the virus, and the actual number is believed to be higher.

Bei Kayapo, an Indigenous leader, said the deaths of the four elders were especially hard.

“They are our history, our museums. They have all the stories of our people,” he said.

The Kayapo Mekragnotire people also want Brazil’s federal government to extend payment of damages for the construction of a road near Kayapo land, and to consult them about a proposed railway project to transport soybeans and corn, which would also affect their region.

The federal government has not responded to their call. The administration of President Jair Bolsonaro did not immediately respond to a request for comment from The Associated Press.

Many trucks on the blocked road carried containers full of corn. Farmers in the Amazon often set fire to their plots at this time of year to prepare them for soybean planting. Smoke from fires that started weeks ago hovered over the blocked road.

Police officers at the scene said similar protests in the past blocked the road for two days. The Kayapo Mekragnotire don’t plan to disband so quickly this time.

“We can go longer than that now,” said Takak-Ire. “We have families mourning their dead, they couldn’t be here. We don’t want to come back next month with fewer people because of this disease.” 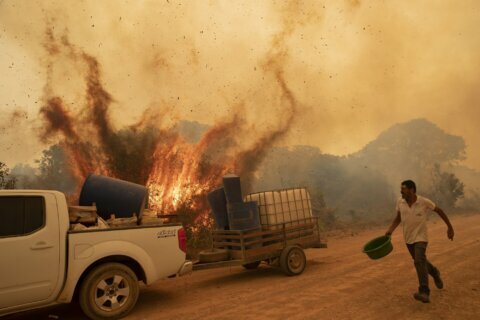