Other countries have seen similar surges in infections following a loosening of restrictions, but the standoff between President Nayib Bukele and the Legislative Assembly appears to be compounding the problem as the country’s hospitals near collapse.

Bukele is demanding emergency powers and says he has been reduced to a “hospital administrator.” Lawmakers in the opposition-controlled congress, meanwhile, argue the president can confront the pandemic without violating constitutional rights.

Both have an eye on legislative elections scheduled for early next year and appear unwilling to cede any advantage.

“Now we see that the measures are politicized, that they’re looking for political calculations, vote yields,” said Dr. Iván Solano Leiva, an infectious disease expert and vice president of the Central American and Caribbean Association of Infectology. He said politics are making the virus more dangerous, and “caught in the middle are the Salvadoran people, who are getting more sick and dying.”

The government has reported more than 19,500 confirmed infections, a number that has increased nearly 400% since a gradual reopening of the economy began June 16, and more than 500 deaths. Reported infections have risen at a similar rate in the rest of the Northern Triangle, Honduras and Guatemala over the same period.

It’s a reversal in a country that early in the pandemic seemed to have the situation under control. Bukele implemented the strictest measures in the region, closing the country’s borders and ordering people to stay at home or face lengthy stays in containment centers.

The president, who remains popular, believes the country needs to be locked down again. He has indicated he would roll back even the limited economic reactivation that began in June. Last week, he announced the second phase of that reopening would be delayed until Aug. 20, the third such delay.

El Salvador’s Supreme Court has repeatedly ruled that the legislature must give Bukele the emergency powers to take drastic steps and that without it he was violating Salvadorans’ constitutional rights. But the legislative body has declined to do so, and lawmakers have been locked in a monthslong standoff with Bukele.

“Unfortunately, the Legislative Assembly and the Constitutional Chamber (of the Supreme Court) took it upon themselves to take away all of the legal tools from us and leave the presidency as a sort of hospital administrator,” Bukele said recently in a local television interview.

Bukele responded with a tweet that read: “In every country in the world, governments order gradual re-openings to control the pandemic. In El Salvador, today that is also unconstitutional. Does nothing matter to them anymore?”

Opposition lawmaker Jorge Schafik Handal, son of a late guerrilla commander of the Farabundo Marti National Liberation Front, said that “nothing has been taken” from the president.

Opposition deputies argue that a state of exception is not necessary to manage the pandemic, nor is forcing people to lock themselves up at home. They also say they did pass legislation that would give Bukele the authority he seeks, but the president vetoed it because there were too many strings attached.

Arguing for a return to lockdown, Bukele said: “We had the virus controlled. We hadn’t won the battle, but the infections were minimal, the deaths were minimal.”

But lawmakers on behalf of powerful economic interests continue to push for greater reopening of the economy. They are also aware of predictions that Bukele’s new party could win control of the legislature next year.

“The handling of the pandemic definitely has a very politicized component,” said Juan Carlos Fernández Saca, dean of the postgraduate program at the University of José Matías Delgado. “This is only an extension of the conflict between president Bukele and the Assembly that started even before he was elected.”

Fernández believes that Bukele’s New Ideas party will still win in February, but people’s disenchantment with the politicization of the pandemic will make its margin less than it would have been.

Health Minister Alabí told the Legislative Assembly last month that “the health system is about to collapse under the increase in COVID infections.” He blamed opposition lawmakers for blocking the administration’s efforts. “We need a national home quarantine to be able to decrease the number of infections,”

Medical Association President Milton Brizuela said “obligatory confinement is not the only solution to confront the problem.” He said a more focused quarantine with aggressive contact tracing could allow gradual economic reopening.

A new hospital built under Bukele has recently relieved some of the pressure for beds — there had only been 30 intensive care beds in the country when the pandemic started.

Solano Leiva, who works in private hospitals, believes the collapse has already arrived.

“We have increasingly seen many people dying at home because they have arrived at the hospitals and were told there were no beds,” he said. “If El Salvador collapses, we all go down and we’re already sinking.” 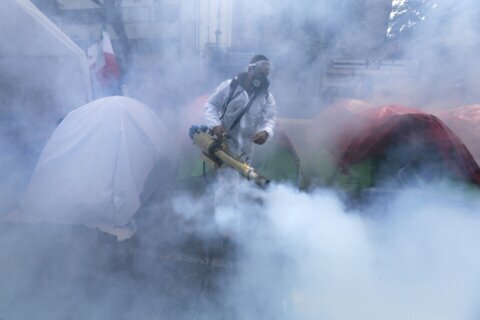 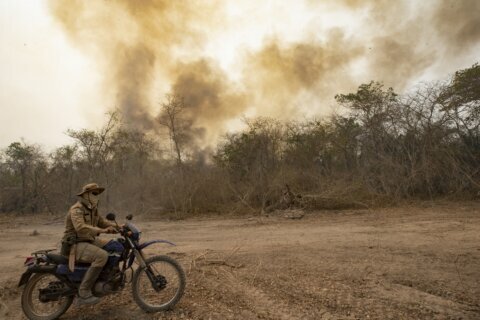