MEXICO CITY (AP) — A scandal involving the abduction and exploitation of young children in a colonial Mexican city popular with tourists widened Wednesday when prosecutors released additional evidence that an adult apparently used other children to help kidnap a missing 2-year-old boy.

The search for Dylan Esaú Gómez Pérez led prosecutors in southern Chiapas state, on the Guatemalan border, to a house in San Cristobal de las Casas where 23 abducted children were being kept in deplorable conditions and forced to sell trinkets and handicrafts in the street.

But Dylan, who turns 3 in November, was not among them.

Reviewing surveillance cameras, state prosecutor Jorge Llaven said that a boy and a girl, both apparently around 12, were seen talking to a woman who is a suspect in the June 30 abduction. Llaven identified the woman as only as “Ofelia,” and offered a $13,500 reward for information about the location of her or the missing boy.

In photos from cameras, the boy and the girl enter the public market where Dylan’s mother worked in the colonial city. Dylan appears to follow the boy, and then the girl takes Dylan by the back of the jacket and walks out of the market with him. The girl is later seen returning alone, apparently having handed the missing boy over to someone else.

Llaven said Tuesday that a search carried out Monday, apparently related to Dylan’s disappearance, had revealed a house where children — most between 2 and 15 years old, but three infants aged between 3 and 20 months — were forced to sell things on the street.

“Moreover, they were forced to return with a certain minimum amount of money for the right to get food and a place to sleep at the house,” Llaven said.

San Cristobal is a picturesque, heavily Indigenous city that is popular among tourists. It is not unusual to see children and adults hawking local crafts like carvings and embroidered cloth on its narrow cobblestone streets.

But few visitors to the city suspected that some of the kids doing the selling had been snatched from their families.

The Chiapas state prosecutors’ office said in a statement the children “were forced through physical and psychological violence to sell handicrafts in the center of the city,” adding the kids showed signs of “malnutrition and precarious conditions.”

According to video presented by the prosecutors, many of them slept on what appeared to be sheets of cardboard and blankets on a cement floor. Three other women have been detained in that case and may face human trafficking and forced labor charges.

Dylan was with his mother, Juana Pérez, at the market on the day he was snatched.

Pérez, who traveled to Mexico City to ask President Andrés Manuel López Obrador to help find her son, works at the market selling fruit and vegetables. She said her son would sometimes wander off to play, but that no children had ever been snatched from the market before.

The boy’s father emigrated to California to find work, and thus Pérez, 23, has had to care for Dylan and his sister by herself. 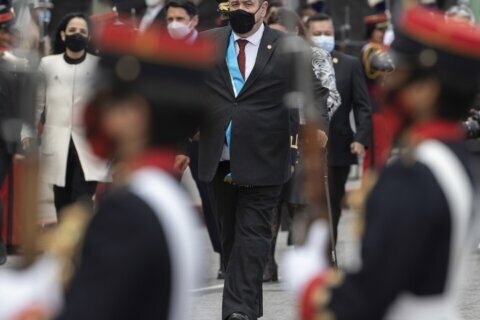