MEXICO CITY (AP) — Mountains of infectious waste, including huge piles of discarded coffins and tons of hospital garbage, are popping up across Mexico amid the coronavirus pandemic, a grisly problem authorities attribute to illegal dumping and unscrupulous operators.

Authorities announced on Monday that they had found 3.5 tons of hospital waste dumped in the woods on the outskirts of Mexico City, and 6,000 cubic yards (meters) of medical waste piled ceiling-high at a clandestine warehouse in Puebla state, leaking out of over-crammed trailers and buildings. Teetering piles of coffins, meanwhile, are piling up outside Mexico City’s overworked crematoriums.

The office for environmental protection said much of the waste would have to be incinerated because it represents a health risk and blamed unscrupulous, unlicensed operators for the problem.

The scene at the Puebla warehouse was grotesque: mountains of red plastic hospital waste bags had been crammed so tightly into one metal-sided warehouse that the walls were bulging and collapsing. The facility’s refrigerated units were not working and the office said blood “and other bodily fluids” were leaking onto the ground in the town of Cuautinchán.

“This company’s improper handling (of the waste) represents a direct environmental and public health risk,” the office said.

And in the town of Nicolás Romero, in a wooded area on the outskirts of Mexico City, someone had been dumping tons of medical waste on a hillside starting sometime around mid-April. By the time inspectors came to clean up the area between May 4 and 11, they found 3.5 tons of the stuff, including tissue and partly-incinerated human tissue scattered around the area.

Specialized waste incinerators are already over-taxed by the flood of disposed protective equipment and infectious tissue being generated amid the pandemic.

The coffin problem continues to pile up, literally, despite a 2019 law that regulates the re-use of disinfected coffins. According to the Mexican Senate, before the pandemic around 100,000 coffins per year were reused.

But while coronavirus guidelines require that the bodies of COVID-19 victims be placed in body bags after death, they still must be transported in containers — usually wooden or metal coffins — to crematoriums. Since there is no guarantee that bodily fluids haven’t leaked out of the bags, people are loath to reuse them for fear of contagion. They are discarded and have simply piled up.

Mexico is plagued by widespread problems with unregulated firms in both the waste disposal and funeral industries. According to the Senate, 60% of funeral agencies in Mexico are either unregistered or not fully registered.

Migrants stuck in Panama demand to continue journey to U.S. 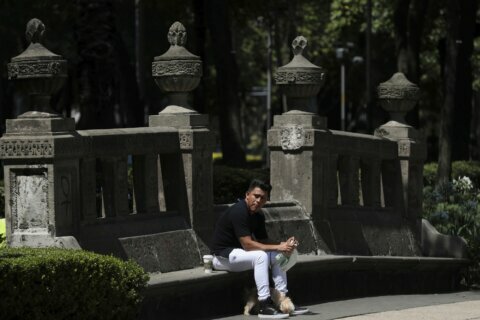