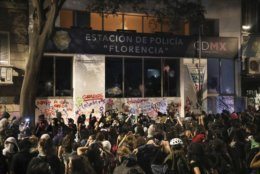 MEXICO CITY (AP) — Mexican women are clamoring for greater safety in one of the most dangerous countries in the world to be a female, and vandalism during recent protests has prompted widespread discussion about how best to draw attention to what many agree is a pressing issue.

Hundreds took to the streets of Mexico City again Sunday to demand justice for women who have been killed, kidnapped and sexually assaulted. They will be led by family members who have lost loved ones. They kicked off the demonstration with an art display using glitter at the base of the Angel of Independence statue, followed by a silent march carrying images of missing women and girls.

Here’s a look at why they march:

HOW SERIOUS IS THE PROBLEM?

The United Nations says that four of every 10 Mexican women will experience sexual violence, such as unwanted groping or rape, during their lifetimes, and that nine women are murdered on average every day in the country.

And that’s just what can be documented, says Ramón Ramos, a lawyer and former deputy minister for public safety in Mexico City.

“Violence against women is one of the biggest problems in Mexico,” says Ramos, who plans to join the march Sunday.

According to the civil organization Mexicans United Against Crime, an estimated 90% of crimes go unreported in Mexico. Many victims see it as a futile exercise. Solving crime is the exception rather than the rule in Mexico, with only one of every 10 reported crimes resulting in jail time.

HOW HAVE WOMEN REACTED?

Mexican women are fed up, and their anger is increasingly boiling over at what they see as impunity for rapists and murderers.

A string of demonstrations decrying violence against women has taken place across the country since reports in August that authorities in the capital were shrugging off accusations that police officers had raped two minors. Demonstrations in the capital became known as the “glitter” protests after women doused the Mexico City police chief with pink glitter.

At one protest, dozens of women trashed a Mexico City bus station, defaced the Angel of Independence monument with spray paint and set a police station ablaze during an August protest. The damage to the monument angered many people, but the protesters argued that the vandalism was a means to demand action for a dire situation, saying a little paint is nothing compared to a life destroyed by violence. City authorities decided not to press charges for destruction of public property.

HOW DO WOMEN FEEL?

A 2018 government survey said 80% of women in Mexico don’t feel safe. Sexual harassment and assault is so common on public transportation that the Mexico City subway reserves two cars on every train exclusively for women.

Experts blame macho attitudes about the roles of women, combined with deterioration in social values, for the widespread violence.

Activists also say the process of reporting a crime is often painful, with lengthy declarations and hours of questioning for the accusers. They say the judicial process is plagued by victim-blaming. Women who are sexually assaulted may be shamed for having worn revealing clothes, while dead women are sometimes dismissed as careless partyers or girlfriends of criminals.

WHAT HAVE AUTHORITIES DONE?

Mexico has improved its legal framework over recent decades to better protect women and girls. The congress passed a constitutional amendment this year that allows for preventive detention for those who are accused of domestic violence for a second time.

Sentences for domestic violence verdicts depend on the severity of the injuries. For instance, the infliction of a bruise or a broken bone that takes more than 15 days, but less than 70 days, to heal may be punished with a sentence of six months to two years in jail, whereas causing life-threatening injuries could result in up to eight years of incarceration.

Rape carries a minimum sentence of six years, regardless of a woman’s perceived chastity. As recently as 2002, rape sentences varied in length, depending on a woman’s supposed sexual innocence.

Sentences for molesting minors may be extended if the abuser was a person of confidence, such as a teacher or a stepfather.

Since 2011, murders of women that carry tinges of gender hate, such as genital mutilation, come with a minimum sentence of 25 years in prison, compared to 20 years for regular homicides.

WHAT MORE CAN BE DONE?

Activists would like to see more women take stands against their abusers. Too often, women drop abuse complaints against their husbands and boyfriends, activists say.

But Ramos says the biggest issue is that the laws are not often applied. Official complacency and ineptitude breed widespread infractions because perpetrators don’t fear reprisal, he says.

“If one doesn’t respect authority, he’s even less likely to respect a vulnerable person like a woman,” Ramos says.