Brazilian human rights and victims’ groups are raising alarms about the record levels of deaths at police hands in the state of 17.2 million people, with 1,075 slain in the first seven months of the year, according to official figures. And far-right Rio state Gov. Wilson Witzel and President Jair Bolsonaro are pushing to give police a still-freer hand.

Witzel said in July that police should lose their “fear of killing.” Bolsonaro said this month that with a new law he backs, criminals “are going to die in the street like cockroaches.”

That echoes the radical anti-crime stance that helped Bolsonaro win the presidency last year — ending a four-election string of leftist victories — and many Brazilians see the police-caused deaths as a regrettable but acceptable price for cracking down on rampant crime.

“Unfortunately, the police today need to be very hard,” said Isaque Samora, an Uber driver who lives in Duque de Caxias, a municipality in the state with high rates of crime.

He said he drives only during the day, to lessen chances of falling victim to criminals. Even so, two months ago, he drove a passenger into a Rio slum and only a few yards (meters) into the shantytown he was intercepted by robbers armed with pistols and rifles.

“Security would only improve quickly if all citizens were policeman,” added Samora, who said he voted for Bolsonaro because of his promise to be inflexible with criminals.

So far, crime is down amid the rising quantity of blood shed by official forces.

Police-involved shootings in Rio have jumped 25%, with 1,144 in the first six months, according to the non-government violence monitor Crossfire. The 194 such deaths reported by officials for July was the most killings involving police in a single month since at least 1998. It’s not clear how many were involved in firefights with police, how many were unarmed suspects and how many were bystanders hit by stray shots.

Meanwhile, official reports show a 23% drop in homicides, a 22% fall in auto thefts and a 9% jump in drug seizures.

Brazil as a whole saw 65,602 homicides in 2017, while preliminary calculations for 2018 showed more than 51,500 killings last year, according to the independent Brazilian Forum on Public Security. Battles between criminal gangs have become common.

“People are fed up with the advance of criminality,” said Ricardo Ismael, a political scientist at the Pontifical Catholic University in Rio de Janeiro. “The harshest repressive measures meet the wishes of a population that can’t stand living with such high indices of criminality.”

In a sort of state-of-the-city speech after six months in office, Witzel boasted that “the police have recovered their respect.”

The number of police killings has reached the highest levels since records began being kept in 2003. According to Crossfire, a growing number of people are hit, often killed, each year by stray bullets — some fired by criminals, some by police. It said there were 225 deaths by stray bullets last year and more than 100 so far this year.

“The governor’s men are going out to shoot at innocent people,” said Jocely do Rozário Junior, who blames the May 16 death of his 11-year-old son on police gunfire.

He said the boy, Kauã Rozario, who spoke of one day becoming a preacher, was riding his bicycle in the Rio de Janeiro slum of Vila Alianca when he happened across a police pursuit of drug suspects and was hit by a stray bullet. Five days later, he died.

Police haven’t acknowledged shooting the boy, saying the case is under investigation. But Rozário Junior said witnesses told him the boy was hit by police gunfire.

“My son wasn’t an adult or a trafficker. He wasn’t anything like that, but he lived with fear every time he saw the police,” Rozário Junior said. “I can’t be quiet because if so, Kauã would be just one more statistic.”

Citizens groups have sprung up in the slums to combat police violence.

“We aren’t warriors here, we are survivors. We have to speak, denounce, complain about what is happening,” said Bárbara Nascimento, a coordinator of the group Stop Killing Us, which emerged in the Vidigal favela.

The group cites as an example a February police operation in the Fallet Fogueteiro slum in which 15 suspected gang members were killed. Neighbors and relatives say the suspects were tortured and killed.

The mother of one of those killed, speaking on condition of anonymity for fear of reprisals, told The Associated Press her son was cut across the throat and stabbed in his belly with a knife by police.

Bolsonaro and Witzel want to give police an ever freer hand. They back a bill in Congress that would forgive actions by police who can show they were motivated by fear, surprise or “violent emotion.”

The hard line doesn’t bother people such as Sonia Manzano, a member of a far-right group that advocates a stronger military role in Brazilian life.

“It’s impossible to end criminality without fatal victims,” she said. “There is no confrontation in history in which everyone comes out unscathed.”

But the rise in violence involving police led Renata Souza, head of the Human Rights Commission for Rio state, to present a complaint against the governor to the U.N. special investigator on extrajudicial killings in May.

“The governor himself acknowledges that he is not going to respect human rights and is going to deal with violence with more violence,” Souza said.

Witzel’s policies include frequent flights over slums with helicopters manned by police snipers and few places have echoed with the sound of the choppers as much as Mare, a slum complex in the city’s north.

There, musician David Vicente said he is part of a different way to reduce crime. He’s part of a favela orchestra meant to give youths an alternative to the gangs.

“My part today is to save children, just as I was saved by the orchestra,” he said.

“I was a boy with a lot of free time, wandering in the street, and today half my friends are tied up in trafficking,” said the 20-year-old. “We should show children that they have another path than the obvious one, which is drug traffic.”

Vicente said most of his neighbors are less fearful of the police than of being caught in crossfire or hit by shots from a helicopter. “You’re not safe even inside your house because a shot can enter through the roof,” he said.

He said that instead of shooting more, officials should focus on programs that give options to becoming a gang member, based on education and culture.

“I’m probably not a trafficker today because I had access to that.” 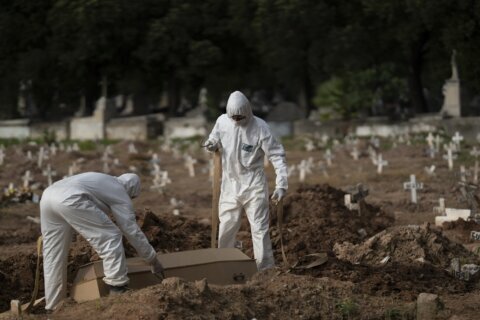