TEGUCIGALPA, Honduras (AP) — A Honduran lawmaker was stripped of her seat in Congress on Monday after being convicted last month of defaming and slandering a local banker.

The court sentenced Maria Luisa Borjas of the opposition Libre party to serve two years and eight months in prison, but she can avoid jail by paying a fine equivalent to about $1 per day of the sentence.

But perhaps more damaging is that her congressional seat will be given to an alternate from her party for the duration of her sentence. Borjas said after the sentence was announced that she would appeal it.

Borjas was running for election in 2017 when she read a list of suspected “intellectual authors” from a security ministry report about the 2016 killing of environmental activist Berta Caceres.

The list included Camilo Atala, president of Ficohsa bank. Atala sued her for defamation, saying the comments caused “irreparable damage” to his reputation. He has denied any connection to the slaying.

At trial, Atala’s side cast doubt on the authenticity of the report that Borjas cited through witness testimony, and the judge ruled in his favor.

Borjas has said she read the report publicly after filing a complaint with Honduras’ national human rights commission, because she knew the report was in the possession of prosecutors and she was concerned it was not being acted on.

Last month, a spokeswoman for the judiciary said the judge found that Borjas made the public statements “irresponsibly, without confirming them.”

At one time Borjas ran the national police department’s internal affairs unit and built a reputation for calling out corruption in the ranks. 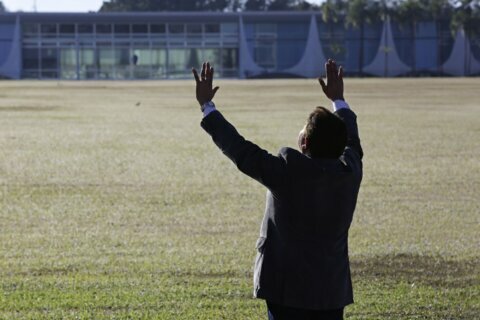