MEXICO CITY (AP) — Mexican President Andres Manuel Lopez Obrador said Wednesday he hopes to negotiate more U.S. work visas for Central American migrants as well as those from his own country, and his administration promised to protect migrants, even as police reported two Hondurans were killed in the border city of Tijuana.

Officials of the new administration said Mexico’s policy toward migrants has changed, from a policy of “containment” to one of respect for human rights.

“We are going to leave behind the attitude of discrimination,” said Alejandro Encinas, the assistant secretary of the interior. Mexico said it is going to increase funding and hire more employees for the country’s refugee agency, which has been notoriously understaffed and slow to process asylum claims.

The changes are part of Lopez Obrador’s plan to discourage emigration not by coercion, but by creating jobs in Mexico and Central America won’t have to emigrate.

His comments came one day after the administration of President Donald Trump pledged $4.8 billion in development projects for southern Mexico and $5.8 for the Central American nations of Guatemala, Honduras and El Salvador.

“This new relationship with the U.S. government is on the right track,” Lopez Obrador said.

However, Central American migrants who arrived large numbers in October continue to face difficulties in Mexico.

Police in the northern border city of Tijuana said two young Honduran migrants were killed in an apparent robbery Saturday after leaving a shelter for underage migrants. Three suspects have been arrested in the crime. 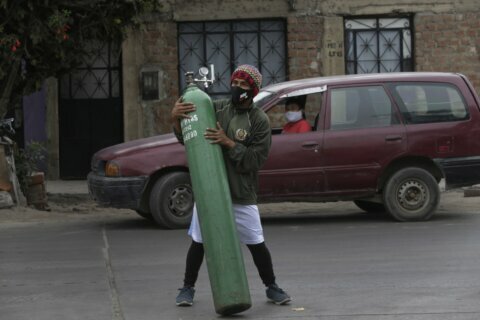 Peru is running out of oxygen for COVID-19 patients