The press got its first glimpse of President Joe Biden's Oval Office on Wednesday, showing how in a matter of hours the office has visibly transformed in both dramatic and subtle ways to reflect the taste and politics of the officeholder.
Listen now to WTOP News WTOP.com | Alexa | Google Home | WTOP App | 103.5 FM
(1/11) 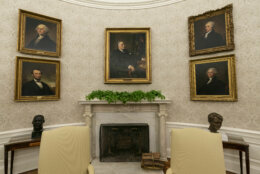 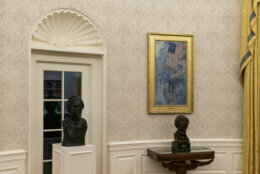 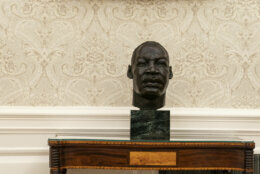 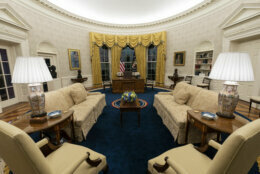 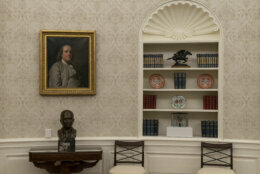 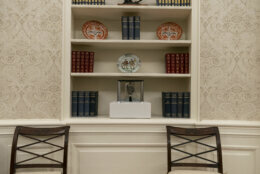 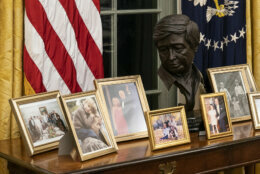 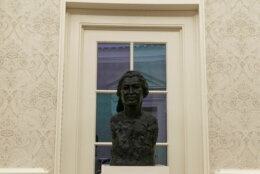 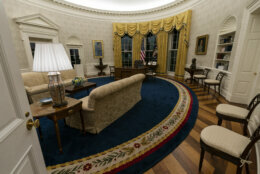 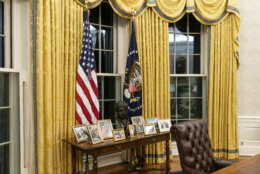 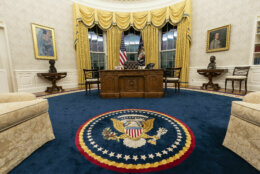 The press got its first glimpse of President Joe Biden’s Oval Office on Wednesday, showing how in a matter of hours the office has visibly transformed in both dramatic and subtle ways to reflect the taste and politics of the officeholder.

Most keep an eye on what’s happening inside the office — what agreements are made, what policies are announced and which foreign dignitaries stop by. But with every inch of the space on display, US presidents, their families and their staffs also meticulously choose which pieces of art are installed, what furniture is hauled in, and even which tchotchkes are placed on shelves.

Here’s how Biden has chosen to change the Oval Office.

A portrait of Andrew Jackson, to the left of the seat at the Resolute Desk, has been replaced with a portrait of Benjamin Franklin by Joseph Duplessis. Like other works routinely lent to the White House, the portrait is on loan from the Smithsonian Institution’s National Portrait Gallery.

Trump drew criticism in 2017 after holding an event in the Oval Office honoring Navajo veterans while standing in front of the portrait of Jackson — the President who signed legislation that eventually led to the “Trail of Tears.”

The Washington Post, which got a first look at the Oval’s new interior decorations, reported that the Franklin portrait and a nearby moon rock set are meant to represent Biden’s interest in science.

A bronze bust of Latino civil rights leader Cesar Chavez, created by artist Paul Suarez, was also placed on the credenza behind his desk.

Chavez sought to bring awareness to the harsh conditions of farmworkers in the US and fight for better wages. The prominent inclusion of his bust in the West Wing came the same day that Biden proposed immigration legislation that would allow undocumented farmworkers to qualify to apply for green cards immediately.

Elizabeth Strater, spokeswoman for the United Farm Workers — a labor group Chavez helped found — told the Fresno Bee that the bust was previously on display in the Visitor Center of the Cesar E. Chavez National Monument in California. Strater told the publication that Biden’s transition team worked with the Cesar Chavez Foundation to ship the piece.

Biden also prominently placed the White House collection painting “Avenue in the Rain” to the right of the seat at the Resolute Desk.

The artwork, rife for metaphors, was on display in the Oval under Trump, but switched out during his term.

The oil painting, created in 1917, was also in the Oval Office during the Obama and Clinton administrations.

Though not entirely visible to television cameras, the Post reported that “busts of the Rev. Martin Luther King Jr. and Robert F. Kennedy flank a fireplace in the office” — in an apparent nod to their efforts in the civil rights movement. There are also busts of Rosa Parks, Eleanor Roosevelt and an Allan Houser sculpture depicting a horse and Chiricahua Apache rider. The sculpture, the Post said, once belonged to the late Sen. Daniel Inouye, a Democrat representing Hawaii.

The Post report says other parts of the office now feature paintings of George Washington, Abraham Lincoln, Franklin D. Roosevelt, Thomas Jefferson and Alexander Hamilton and a bust of Daniel Webster, a former senator who defended the Union. A bust of Winston Churchill has been removed from display.

On the Resolute Desk

There were two sets of objects spotted on the Resolute Desk when Biden took office that definitely reflect a transition of power: a cup and saucer set, as well as a box of pens to sign the orders.

Trump was a Diet Coke drinker, who reportedly had a button in the Oval to summon someone to bring him soda. He was rarely photographed with a tea or coffee cup at his side.

Trump has also long loved using thick, black markers to sign his name on official government documents — celebrity autograph style. He originally stuck to the traditional pens used by other presidents, but at some point, switched to the Sharpie-style markers, with his golden signature printed onto its barrel.

During the executive order signing on Wednesday, Biden was seated in a tufted, dark brown leather chair — a switch from the thick, reddish brown executive seat Trump was last photographed sitting on inside the Oval Office. It was extremely similar, if not identical to the seat Trump used in his private office before becoming president.

The Bidens selected at least two Clinton-era furnishings to replace Trump’s selections — a blue Oval Office rug with a floral trim and darker gold curtains, according to the Post. Other items, which may look familiar, were chosen from the White House collection, the Post says.

Flags of the US military branches, which Trump originally added to the decor of the room, have been removed.

Photographs behind the President typically displayed on the credenza were switched out to feature Biden’s family. Many of the images show just how large the President’s family is, and the images include many of the family members who accompanied him in Washington on Inauguration Day. At least one photograph features his late son, Beau.

Trump’s Challenge Coin collection, often placed on the credenza, is gone as well.