National Guard troops flooding in as Washington locks down 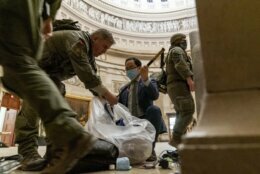 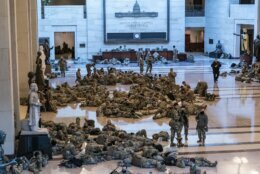 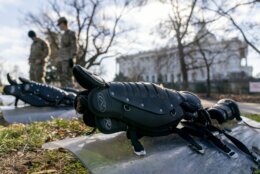 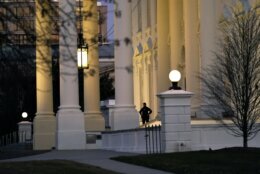 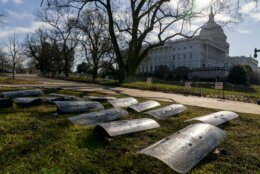 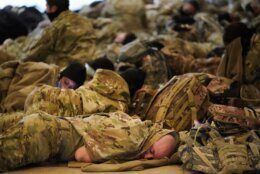 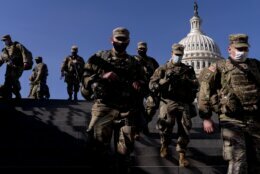 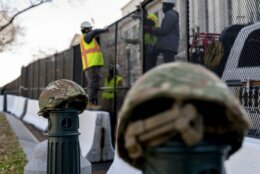 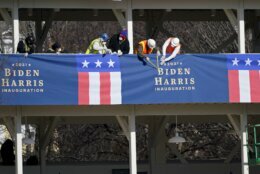 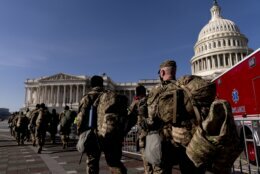 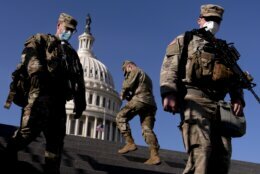 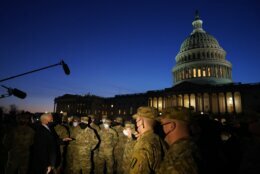 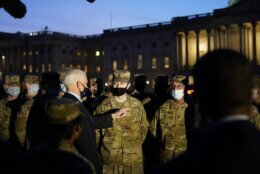 WASHINGTON (AP) — All through downtown Washington, the primary sound for several blocks was the beeping of forklifts unloading more fencing.

There were no cars or scooters and seemingly no tourists Wednesday, just the occasional jogger and multiple construction crews at work. The U.S. Capitol, which proved such a soft target last week, was visible only through lines of tall, black fence.

Two blocks from the White House, a group of uniformed National Guard troops emerged from a tour bus and headed into a hotel as a state of lockdown descended on Washington that will last through the Jan. 20 inauguration.

The number of National Guard troops coming to Washington to assist with security has so far grown to about 21,000, Army Gen. Daniel Hokanson, chief of the National Guard Bureau, told Vice President Mike Pence at a briefing Thursday. And officials have said the number could grow as law enforcement agencies review the ongoing threats.

Last week’s “violent insurrection” at the Capitol by supporters of outgoing President Donald Trump has “impacted the way we are approaching working with our federal partners in planning for the 59th inauguration,” Bowser said Wednesday.

The FBI has warned that armed protests by violent Trump supporters were being planned in all 50 state capitals as well as in Washington for the days leading up to the inauguration of President-elect Joe Biden.

Between the pandemic and the security threat, Bowser is flat-out asking people not to come to the District of Columbia for the inauguration. And at Bowser’s request, a National Special Security Event declaration was moved up to Jan. 13, a distinction she said “puts in place an entirely different command and control structure” for security.

The NSSE status is normal for a presidential inauguration and other major events like an international summit or the Super Bowl. But it’s rare to start the lockdown so far in advance of the event.

Police vehicles sealed off a huge swath of downtown D.C. on Wednesday, causing immediate traffic snarls. Starting Wednesday, Bowser said, anyone inside the inauguration perimeter might be stopped and questioned. Starting Friday, all parking garages in the downtown restricted zone will be sealed through the inauguration. Bowser is asking D.C. residents to avoid the downtown area entirely, and the city announced that 13 Metro stations inside the security perimeter will shut down for several days.

Bowser is also being pushed to deny lodging options to potentially violent protesters. The local Black Lives Matter affiliate and Shutdown DC issued a joint statement Wednesday urging all downtown hotels to voluntarily close and pay their staffs. In addition to the threat of violence, the activist groups say Trump supporters are a threat to the health of hotel staff for their general refusal to wear facemasks during the pandemic. Several downtown hotels, including one which had become a favorite hangout of the militant Proud Boy faction, chose to avoid trouble by closing last week.

“Closing hotels completely for these six nights is the only way to guarantee the safety of hotel workers, neighbors, vulnerable and unhoused residents, incoming administration officials, members of Congress, and our democracy,” the statement said. “If hotels do not willingly close, we ask Mayor Bowser to extend today’s emergency order and close all hotels in the city.”

On Wednesday, Airbnb announced it was canceling all reservations in the Washington metro area. Bowser said she had been in regular contact with Airbnb officials since last week, but did not specifically request this step.

“We are aware of reports emerging yesterday afternoon regarding armed militias and known hate groups that are attempting to travel and disrupt the Inauguration,” a company statement said. “We are continuing our work to ensure hate group members are not part of the Airbnb community.”

On the ground, much of the most visible security will come in the form of the National Guard troops, some of them armed. Pentagon officials approved requests to have some of them carry either long guns or handguns, particularly those assigned near the Capitol building. The officials spoke on condition of anonymity to discuss security details.

National Guard members operate under strict rules of engagement on the use of force. But generally speaking, troops can use lethal force to protect the lives of others and themselves.

D.C. Police Chief Robert Contee estimated Wednesday that more than 20,000 National Guard members would be active in the city on Inauguration Day. But officials said Thursday that law enforcement had requested many more, and the number approved by the Pentagon is now 21,000.

As of Thursday, there were roughly 7,000 already in the city, with thousands more en route. The length of their missions may vary, but Defense Department officials were authorized to deploy the Guard for up to 30 days for the inauguration and surrounding protests.

U.S. defense officials say state leaders have made it clear that their priority is to protect their own capitals, which are on alert against violent protests or attacks, but they also have given assurances that they will have enough troops to send some support to the U.S. Capitol. 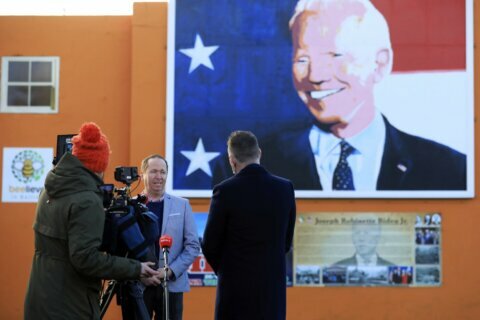 World hopes for renewed cooperation with US under Biden 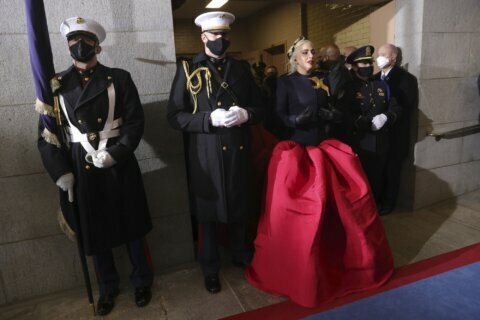 Hollywood on the Potomac: A-list turns out for Biden-Harris 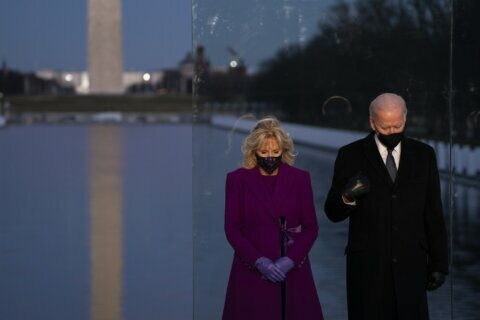 On Day One, Biden targets Trump policies on climate, virus