BEAR, Del. (AP) — The Mussers’ house outside Bear is surprisingly easy to find, especially at night after the sun has gone down.

With the rest of the neighborhood cast in shadow, it stands out like a bright shining beacon of Christmas cheer. More than 6,000 LED bulbs bathe the street in red, blue, yellow and green, while bright white icicles announce that the holidays are officially here.

For the 20-year-old HVAC contractor, putting up Christmas lights has become a monthslong saga.

When he first started decorating the house seven years ago, at age 12 or 13, he used only a half-dozen or so strands of bulbs. Jake had found a six-channel box that would let the lights dance to Christmas music and figured, why not?

“And over the years, it’s just gotten progressively bigger and bigger,” Jake said.

Now, he typically starts planning his 12-minute light show in August. He mixes the music himself, figures out how he wants to arrange the lights and programs them to flash in sync to the “epic metal” Christmas music.

This year, things are a tad different, he admitted. Jake had planned on taking a short break from the Christmas light game, which can be time-consuming and exhaustive.

But friends and family kept asking him about the lights, and in October, he decided once again, why not?

“I’ve never put up so many lights in so little time,” Jake said.

Jake’s mom, Chris, said he taught himself how to put up and program Christmas lights, relying on the internet for advice.

“YouTube is the Bible,” she said laughing. “There was nothing I could do to help him.”

And she mostly left him to it.

Her one condition was that Jake couldn’t go up on the roof unless someone was home to watch him.

Jake had already taken over the garage, she said. This was just another hobby.

“I don’t think I’ve had my car in there since he was 8,” Chris said laughing. “He was always working on projects.”

When he wasn’t assembling Christmas lights, Jake was making potato launchers and other gadgets, she said. They’d test them out together, as a family.

The Christmas lights soon eclipsed Jake’s other work, however. He started mowing the neighbors’ lawns to make money for more lights, and over time he slowly transitioned to LEDs.

He also invested in expensive, wall-mounted controllers and power supplies. Ethernet cords run up to his room above the garage, where he uses a computer program called xLights to sequence the lights, Chris said.

He solders together wires and rants about not having enough data to keep the lights from flickering. Chris and Jake’s sister, Nicole, can’t follow all the technical jargon anymore and focus on making cookies and hot chocolate instead.

“We don’t really help with the lights … because we don’t know how,” Chris said.

This time of year they do know if Jake’s not in the house, he’s outside. In between his full-time job and apprenticeship with Local Union 74, he has limited time to get everything done.

“Sometimes it’s down to the wire,” Chris said. “I’d say he’s in better shape this year than he’s ever been.”

The biggest question in many people’s minds is how much the light show costs.

The family barely grimaces at the question. It’s expensive, but they enjoy the experience too much to truly regret the expense.

With the LEDs, Chris said, she barely sees a bump in her electrical bill anymore. In the past, it went up slightly, but “it’s never been a shock.”

The entire family said the time, energy and money is all worth it.

“I definitely enjoy everyone’s faces when they see all the lights,” said Jake, who has been known to peek out the blinds to check whether or not people are watching the show from their cars.

An estimated 100 people showed up to watch Jake’s first light show in 2011, the family said.

Now, they hold a big reveal every year and invite the general public. The Mussers’ neighbors help out by either assisting Jake with the lights, baking cookies, lending them tables and extension cords or handing out flyers.

One neighbor plays Santa Claus and poses for free pictures with kids.

Others have donated money.

The family is holding opening night this Saturday, and after that, the light show will be on every half-hour from 6 to 9 p.m. Sundays through Thursdays and 6 to 10 p.m. on Fridays and Saturdays.

“I expect this to be our biggest crowd yet,” said Jake, who has been working nonstop to get everything ready.

On Facebook, 209 people have already RSVP’d for Saturday night. An additional 2,000 have expressed interest in attending.

Nicole said more people may be interested in the show this year because it was so good in 2017.

“Last year was the best show,” said Nicole, who is skipping a Christmas party at work so she can be there to help.

If it rains, the show will go on, the family said, though Santa may be rescheduled for the following week. 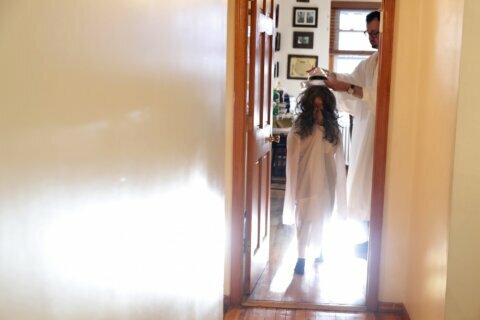 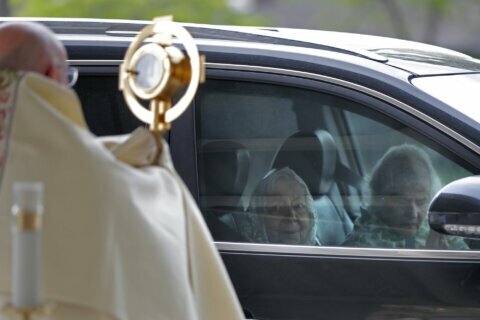