VP Harris fights for Democrats’ future — and her own

The midterms are just days away, with control of Congress and statehouses across the country up for grabs, but Brown and her friends were really hoping for a hint of what might happen a few years down the line.

The comments are just a glimpse of the expectations and special scrutiny that Harris faces as the first person of color and first woman to be vice president — and someone who campaigned for the top job before agreeing to be Joe Biden’s running mate.

The vice presidency is never an easy position, requiring ambitious politicians to contort themselves into the role of sidekick. And it’s been particularly difficult for Harris. She’s a groundbreaking leader, a former U.S. senator and California attorney general. But she struggled with a portfolio of vexing challenges and internal staff turmoil soon after taking office.

Allies say she’s found a degree of stability since then, and they describe the midterm elections as an opportunity to project her own voice on issues such as reproductive freedom, which became a centerpiece of her message after the U.S. Supreme Court overturned the nationwide right to abortion this year.

Now, with Democrats facing the possibility of a sweeping defeat at the ballot box next week, the party is bracing for another round of introspection about its future — and by extension, Harris’ own.

It’s not a conversation the vice president’s inner circle wants to have as Biden lays the groundwork for a second term even as he approaches his 80th birthday.

“They intend to run, and they intend to run together,” said Laphonza Butler, who was as an adviser to Harris’ presidential campaign and now leads Emily’s List, a political organization that supports women who favor abortion rights. “So until there’s another question, that’s the answer.”

Still, midterm campaigning for other Democrats is a chance for Harris, who recently turned 58, to nurture constituencies that supported her in the past and could again. Her travel has focused on young people, voters of color and women, including at historically black colleges and roundtable meetings on abortion.

In Boston on Wednesday, she rallied for a slate of all-female candidates, from governor down to auditor. And she told the crowd to “call your cousins who live in other states” to encourage them to vote for Democrats.

“Elections matter,” Harris said. “We got a lot done. And we still have more to do. And the stakes are high.”

Although Harris has a reputation for tying herself in linguistic knots, allies say she’s at her best when campaigning for others and — to borrow the rhetoric of the former district attorney’s failed presidential bid — prosecuting the case against Republicans.

With poll numbers that remain underwater, she’s steered clear of some of the tightest Senate campaigns in places like Arizona and Ohio. But her abortion advocacy has expanded her travels, taking her to Nevada and Wisconsin, where the president hasn’t campaigned.

She’s also chatted with social media influencers and called into radio shows in battleground states. She’s hosted more than a dozen fundraisers for the Democratic National Committee and visited Pennsylvania, Illinois, Michigan and Wisconsin, among other states.

Chris Lehane, a former Democratic strategist who worked for Vice President Al Gore, says the midterms are an opportunity to make a “political brand deposit.”

“You’re able to help folks who are running up and down the ticket. And they remember that,” he said.

Turnout among young voters tends to drop off in the midterms, with no presidential race to boost interest. So some of Harris’ work has focused on reaching them through social media personalities who have hundreds of thousands of followers.

“When you weigh in with your vote, you can get what you’re advocating for,” Harris told Hannah Bronfman, a health and wellness influencer. “But if you don’t vote, your voice won’t be heard.”

She also spoke with Keir Gaines, a therapist who creates online content about family relationships and mental health, to warn that “your auntie, your sister, your cousin, your daughter” are going to have less rights because of the Supreme Court’s abortion decision.

Harris can steer herself into rhetorical dead ends, causing her allies to cringe and her critics to try to turn them into viral videos. In September, she referred to the U.S. alliance with the “Republic of North Korea” after touring the Demilitarized Zone.

Nathan Barankin, who served as Harris’ chief of staff when she was a U.S. senator from California, said her gaffes are the result of being “someone who has been overly scripted, or someone who is very worried about deviating from a script that she didn’t create.”

“I would put her head to head with any of the best retail politicians, at least behind closed doors,” Barankin said. “What you see when she’s got 40 cameras pointed at her is usually not what she’s capable of.”

An October AP-NORC poll showed only about half of Democrats want Biden to seek a second term. But it’s not clear that voters are clamoring for Harris instead. When she ran for president, her campaign stalled before voting began, and now her favorable ratings lag behind Biden’s. That’s largely because she’s more unknown.

Young Americans in particular – those under 30 – are especially likely to say they don’t know enough to have an opinion of Harris.

A Saturday Night Live skit from last weekend envisioned a horror movie about Democrats’ chances in 2024 if Biden doesn’t run again. When a panicked voter suggests Harris as his successor, another one slaps him across the face. “Wake up!” she shouts.

Challenging Harris for the nomination, however, would be no easy task.

Rep. Jim Clyburn, a Democratic kingmaker in his home state of South Carolina, said over the summer that he would back Harris if Biden didn’t run. It was a noteworthy comment from a politician who helped secure Biden’s nomination by demonstrating his strength among black voters.

“Tell me who beats her in South Carolina?” said Cornell Belcher, a Democratic pollster.

Although being vice president can be a thankless task, no other job allows someone to take a dress rehearsal to be commander in chief. Her first foreign trip, to Guatemala and Mexico, was overshadowed by an awkward interview about migrant issues, when she tried to laugh off a question about visiting the U.S. southern border.

But she’s also made key appearances on the administration’s behalf, such as attending the Munich Security Conference shortly before the Russian invasion of Ukraine. She’s preparing for her third trip to Asia, with stops in Thailand and the Philippines, as the U.S. looks for ways to counter China in the region.

“She’s making me look good,” Biden said in Philadelphia last week. “And God love her. She’s more like my buddy and my sister, but I trust her with my life. I trust her completely.”

Lehane used a baseball metaphor to describe Harris’ evolution in the role.

“You don’t get to the Major Leagues if you can’t hit a Major League fastball,” Lehane said. “Rookies need to adjust to curveballs and sliders and the pitches that separate the majors from the minors.”

Over the past year, Lehane said, Harris has shown she can do just that.

Cedric Richmond, who worked in the White House before becoming a senior adviser to the Democratic National Committee, used an unprintable word to describe the narrative that Harris initially flailed in the job.

“I think she had a good first year,” he said. “I think she was overly scrutinized by the press, and she was a first in so many ways.” 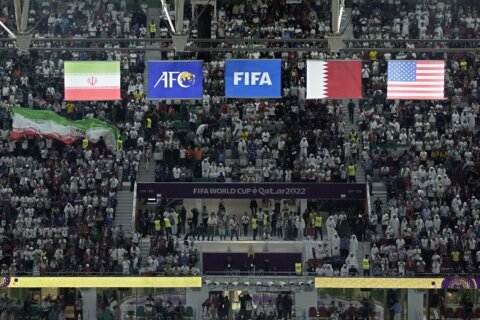 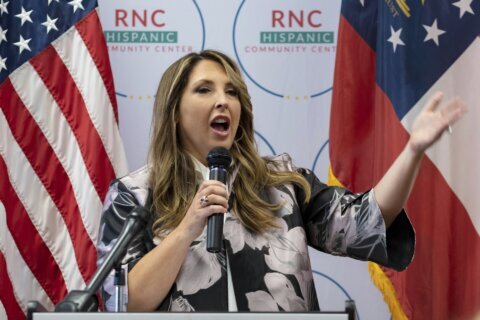