RENO, Nev. (AP) — A rural Nevada county’s plan to hand-count all paper ballots for the midterm elections is coming under renewed scrutiny just days before the tally is set to begin.

The sticking point: How the county will keep the ongoing vote totals from leaking publicly.

A ruling Friday from the Nevada Supreme Court allowed the hand count to move forward with several provisions, one of which was to ensure that the vote counting was not live-streamed and to figure out a way to ensure that election workers could keep the tallies secret.

Ballots cast early, either in-person or by mail, are typically counted by machine on Election Day, with results released only after polls close. Nye County, where conspiracy theories about voting machines have run rampant, wants a hand count in addition to the machine tally. The hand-count of mail-in ballots is set to start on Oct. 26, just under two weeks before Election Day to be certified by the state’s deadline.

In a letter to interim Nye County Clerk Mark Kampf over the weekend, Nevada Deputy Secretary of State for Elections Mark Wlaschin asked for a “written explanation as to how Nye County and you intend to comply with all of the provisions” of the ruling.

The Nevada Supreme Court ruled partially in favor of an American Civil Liberties Union lawsuit that challenged several aspects of the hand-count, including a livestream that Kampf said allows individuals to “become poll watchers at home.”

In Saturday’s letter, Wlaschin said he particularly needed to know how Nye County would ensure that observers do not prematurely learn the running results of any races. Nevada has nationally important races this year for U.S. Senate, governor and secretary of state.

Lawyers who represented Nye County responded Monday by saying only that the county “fully intends to comply” with the state Supreme Court’s Friday order.

Wlaschin did not immediately respond to a text message Monday afternoon asking if the county’s hand-count will still be permitted.

Recordings from the cameras that were originally meant to livestream the hand-count now will not be released until polls close, the county said in its response. As for the public hand-count, the county noted that they will be conducted in four to six different rooms, so viewers will not know the “totality of returns.”

Observers must sign a form saying they will not release any early results they hear. If they do release them, they could be charged with a gross misdemeanor.

“Unless we hear from you otherwise, we will assume that Nye County’s procedures for its parallel process as set forth above sufficiently comply with the Order,” Nye County’s counsel said in the Monday letter.

Hand-count tallies are done publicly for transparency, with observers in the room. Voting groups have said that raises the possibility that someone could release early results before most voters have even cast their ballot, which they have said could cause “manipulative release” and influence voter turnout.

Under Nye County’s plan, hand-count teams of five will include a reader who announces each result, a verifier who looks over the reader’s shoulder and three talliers who write down the results. The talliers then compare their results before submitting them. They count ballots in batches of 50 in a public area.

In an email to The Associated Press, Kampf said he had 98 volunteers as of Monday morning.

Nye County is one of the first jurisdictions nationwide to act on election conspiracies related to mistrust in voting machines. In June’s primary, Nevada’s least populous county, Esmeralda, took more than seven hours to hand-count the results on 317 ballots cast to certify results.

Elsewhere in Nevada, Elko County’s board of commissioners signaled their support for hand-counting and paper ballots last week, although they will likely stick with machines this cycle because Election Day is so soon.

Hand-counting is mostly used in small townships across New England and rural Wisconsin. There are 658 jurisdictions in the continental U.S. that rely exclusively on hand-counting, with the vast majority having fewer than 2,000 registered voters, according to data from Verified Voting, a group that tracks voting equipment across states.

It also will use machine tabulators for the Nov. 8 election. But the sheer number of ballots to be hand-counted raises questions about whether the county can meet the Nov. 17 deadline to certify results.

Kampf was appointed county clerk after the long-time clerk resigned in July, a decision she made after election conspiracies, fueled by those repeating lies about former President Donald Trump’s loss in 2020, spread throughout the county. The board of commissioners voted unanimously to recommend doing away with voting machines and count all ballots by hand. 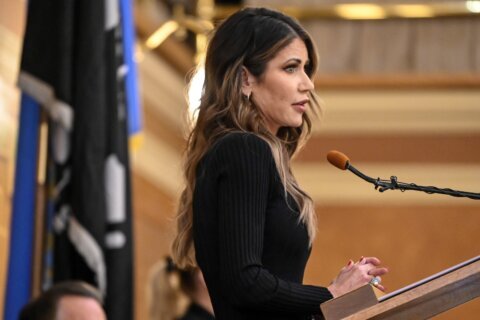