WASHINGTON (AP) — The trial of a far-right extremist group leader and four associates charged in the Jan. 6, 2021, attack on the U.S. Capitol was delayed on Monday after the Oath Keepers leader tested positive for the coronavirus.

Jurors were supposed to begin hearing the fourth week of testimony in the case against Stewart Rhodes and four others accused of plotting to stop the transfer of power from Republican Donald Trump to Democrat Joe Biden.

Testimony could resume Tuesday morning if Rhodes waives his right to be present in court for at least some of the remaining government witnesses. The judge said he believes the earliest Rhodes can return to court is next Monday.

Prosecutors were initially expected to rest their case by the end of this week and then Rhodes’ attorneys were going to begin putting on their defense. Rhodes’ lawyers have said their client will take the stand to testify that all of his actions were in anticipation of orders he expected from Trump — orders that never came.

The defendants are the first among hundreds charged in the Capitol attack to stand trial on the charge of seditious conspiracy, a rare Civil War-era charge that carries a maximum sentence of 20 years in prison.

Prosecutors have said Rhodes and his extremist group planned an “armed rebellion” to keep Trump in power. Authorities say they had “quick reaction force” teams stationed at a Virginia hotel to get weapons into the city quickly if they were needed and that the group was prepared to stop Biden from becoming president by any means necessary.

Defense lawyers have accused prosecutors of cherry-picking messages and have said they came to provide security to political figures like Roger Stone, not to carry out a plan to attack the Capitol.

Testimony began on Oct. 3 and the judge had said witnesses could stretch into the week of Nov. 14. The stakes are high for the Justice Department, which last secured a seditious conspiracy conviction at trial nearly 30 years ago and intends to try two more groups on the charge later this year.

The disruption comes almost a week after a juror was dismissed after testing positive for COVID. The federal courthouse in Washington where the trial is being held last week lifted its mask mandate, but the judge overseeing the trial was still requiring those not speaking to wear masks to avoid an outbreak. Still, lawyers and defendants were occasionally seen with noses exposed or masks pulled down under their chin.

On trial with Rhodes, of Granbury, Texas, are Kelly Meggs, leader of the Florida chapter of the Oath Keepers; Kenneth Harrelson, another Florida Oath Keeper; Thomas Caldwell, a retired U.S. Navy intelligence officer from Virginia; and Jessica Watkins, who led an Ohio militia group. They face several other charges as well.

They are among roughly 900 people who have been charged in the attack, which temporarily halted the certification of Biden’s victory, sent lawmakers running for cover and left dozens of police officers injured. 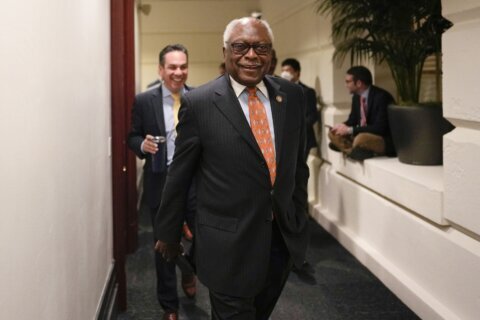