She ended her campaign with a nonconcession that acknowledged she wouldn’t be governor, while spotlighting her claims that Kemp had used his post as secretary of state to improperly purge likely Democratic voters. Abrams founded Fair Fight Action, a group focused on fair elections, which within weeks filed a wide-ranging federal lawsuit alleging “gross mismanagement” of Georgia’s elections.

That lawsuit sputtered out Friday with Fair Fight losing its last remaining arguments, more than a year after the judge had tossed most earlier claims.

People are already voting by mail in a Georgia governor’s race that again pits Abrams and Kemp against each other, with fewer than 40 days remaining before voting ends on Nov. 8.

And Republicans are now using the loss to attack what they see as the “big lie” that underlies Abrams’ career. They label her claims that Georgia’s election system has been discriminatory as a fraud she used to enrich herself and aggrandize her political career after her 2018 loss.

“This is existential to who Stacey Abrams has become as a public and political figure,” Georgia Attorney General Chris Carr, a Republican who defended the case, told The Associated Press on Saturday. “She put herself in the political spotlight nationally, potentially globally, all over the narrative that she lost the governor’s race because of voter suppression. And here you have a federal judge saying, it’s all untrue. It didn’t happen.”

Carr and Secretary of State Brad Raffensperger are among a faction of Georgia Republicans who say that Democratic President Joe Biden beat Donald Trump fair and square in 2020 for Georgia’s 16 electoral votes and that Kemp also beat Abrams fairly in 2018. They argue that Trump’s claims about voter fraud in 2020 and Abrams’ claims about voter suppression in 2018 both corrode faith in democracy.

“Stolen election and voter suppression claims by Stacey Abrams were nothing but poll-tested rhetoric not supported by facts and evidence,” Raffensperger said Friday in a statement.

Abrams, though, has said from the dawn of her current campaign that her actions in 2018 are not equivalent to what Trump did.

“I will never ever say that it is OK to claim fraudulent outcomes as a way to give yourself power,” Abrams told news outlet The 19th last month. “That is wrong. I reject it and will never engage in it. But I do believe that it is imperative, especially those who have the platform and the microphone, to talk about the access.”

She is far from backing down from her position, and says she won a number of victories that made elections fairer.

In 2019, less than six months after the Fair Fight lawsuit was filed, legislators passed a law that addressed some of the issues. The law’s biggest change was to replace the state’s antiquated, paperless touchscreen voting machines with a new system that uses touchscreen machines to print paper ballots that are scanned.

The plaintiffs also count as wins the reinstatement of 22,000 voters who were removed from the rolls in 2019, an end to people being excluded from voting rolls if their records didn’t exactly match their driver’s license, an audit that identified people wrongly excluded because of incorrect citizenship information, and improvements to a voter’s ability to cancel a mailed ballot and vote in person.

“As the judge says in his first sentence, ‘This is a voting rights case that resulted in wins and losses for all parties,'” Abrams said in a Friday statement. “However, the battle for voter empowerment over voter suppression persists, and the cause of voter access endures. I will not stop fighting to ensure every vote can be cast, every ballot is counted and every voice is heard.”

And despite the loss, the idea that Republicans are trying to restrict voting is a powerful current running through the most bitter disputes in Georgia politics — not only Abrams’ 2018 loss, but also a 2021 Republican election law that shortened the period to request an absentee ballot and limited ballot drop boxes, and harsh clashes over redrawing election districts this year that led one Democrat to accuse Republicans of seeking to preserve “white power.”

Jermaine House, director of communications for political research firm HIT Strategies, said that “because there’s been so much energy and excitement and conversation” around voting rights in Georgia, it’s an issue that drives Democrats, especially African Americans, to the polls. His firm has done work for liberal voter mobilization group New Georgia Project, the NAACP and Democratic efforts to reelect Sen. Raphael Warnock. 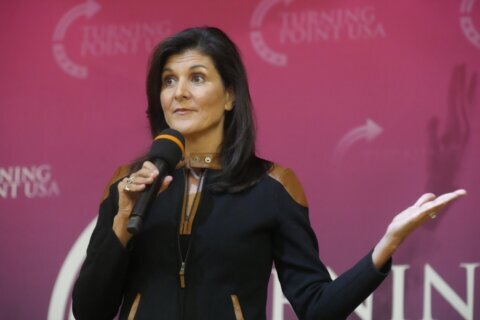