WASHINGTON (AP) — President Joe Biden has hit back at Iran over the government’s brutal crackdown on antigovernment protests. He’s praised the “brave women of Iran” for demanding basic rights and signaled that he’ll announce more sanctions against those responsible for violence against protesters in the coming days.

The outpouring of anger — largely led by young women and directed at the government’s male leadership — has created a seminal moment for the country, spurring some of the largest and boldest protests against the country’s Islamic leadership seen in years.

And while the Biden administration says it is dedicated to standing by the women of Iran, the president faces a tough question: Can he credibly side with the protest movement while also trying to salvage the languishing 2015 Iran nuclear deal that would pump billions into Tehran’s treasury?

“The risk of a nuclear Iran is terrifying on all levels,” Marjan Keypour Greenblatt, director of a network of activists that promotes human rights in Iran and a nonresident scholar with the Middle East Institute’s Iran Program, wrote in an analysis this week. “However, President Biden simply cannot offer the prospect of sanctions relief and de facto legitimize a regime that is ruthlessly gunning down its own citizens in the street.”

The weeks-old protests were triggered by the death of 22-year-old Mahsa Amini, who died in Iranian security custody. Morality police had detained Amini last month for not properly covering her hair with the Islamic headscarf, known as the hijab, which is mandatory for Iranian women. Amini collapsed at a police station and died three days later.

Her death and the subsequent unrest have come at a complicated moment as the administration tries to bring Iran back into compliance with the nuclear deal that was brokered by the Obama administration and scrapped by the Trump administration.

The deal already was teetering toward collapse despite Biden’s efforts to revive it. But the administration has not given up all hope for a turnaround via indirect talks with the Iranian leadership. The pact, known as the Joint Comprehensive Plan of Action or JCPOA, would provide Tehran with billions in sanctions relief in exchange for the country agreeing to roll back its nuclear program to the limits set by the 2015 deal. The deal includes caps on enrichment and how much material it can stockpile and limits the operation of advanced centrifuges needed to enrich.

Chances for a return to the deal have come tantalizingly close since the beginning of this year, but have been derailed by Iranian demands that the U.S. maintains are outside the scope of the original agreement. And now, prospects for a resumption in negotiations are bleak at least until later this fall.

Critics of the nuclear deal argue that the administration should break off all consideration of a renewed deal. They say the sanctions relief windfall that Iran would enjoy would be used to further repress its own people and fund proxies that would exacerbate broader threats in the region.

“The White House faces an internal strategic contradiction: How can you claim to be holding the regime accountable for internal repression while offering that same regime sanctions relief in Vienna?” said Richard Goldberg, an analyst at the Foundation for the Defense of Democracies, a policy institute focusing on foreign affairs and national security.

But the administration has so far held to Biden’s initial campaign position: A deal with Iran will make the world safer. That strongly held viewpoint creates an unusual split-screen dynamic for Biden, who speaks frequently about the need to stand firm in the battle of democracies vs. autocracies.

His administration has insisting on keeping nuclear talks with Iran on a separate track — even while condemning Tehran’s selling drones to Russia for its war in Ukraine; persistent attacks against U.S. allies in Saudi Arabia, Yemen, Syria and Iraq; holocaust denialism by Iran’s president and supreme leader; the wrongful detention of American citizens; and now a brutal effort to squelch the voices of Iranian women speaking out for basic rights.

“Look, I mean … we have concerns with Iran; we have said that before,” White House press secretary Karine Jean-Pierre said earlier this week. “But the JCPOA is the best way for us to address the nuclear problem that we see. As long as we believe pursuing JCPOA talks is in the U.S. national security interest, we will do so.”

Officials say they are still convinced of the central argument the Obama administration made when it negotiated the original nuclear deal in 2015: An Iran with a nuclear weapon is more dangerous than an Iran without one, no matter what the circumstances.

There have been other moments when pent-up anger has convulsed the Islamic Republic only to peter out. In 2009, millions took to the streets in what was known as the Green Movement after the government declared the victory of Mahmoud Ahmadinejad in a hotly contested presidential election.

Tens of thousands of frustrated Iranians protested in 2017 and 2018 against the country’s stunted economy and seeking greater social freedoms. Hundreds of protesters were killed in protests in late 2019 spurred by skyrocketing fuel prices and government policy writ large.

The White House says the administration’s support of the protesters has been robust.

Yet, some analysts argue that thus far the administration has offered only a tepid response to the crackdown on the demonstrations. The most significant support the administration has provided to protesters thus far has been easing restrictions on the export of software and hardware to make it easier for Iranians to communicate with each other and the outside world.

Karim Sadjadpour, an Iran expert at the Carnegie Endowment for International Peace, said it’s time for the administration to think bigger. 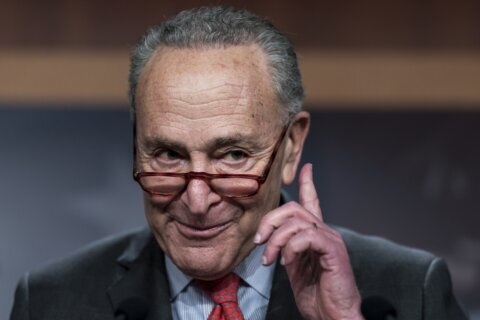 Warnock delivers 51-seat Senate for Democrats, and much more