BOSTON (AP) — President Joe Biden said Monday said if Democrats lose Congress after the upcoming midterm elections, it’s going to be a “difficult two years,” and he’s going to be spending a lot of time “with the veto pen.”

Biden was speaking at a Democratic National Committee reception in a swanky Boston apartment following his speech about his administration’s efforts at ending cancer “as we know it.”

In the starkest terms yet, the president laid out how important the upcoming November midterm elections are. The U.S. Senate right now is split 50-50 with Vice President Kamala Harris as the tie-breaker. The House is 219-211 in favor of Democrats. Republicans are favored to take control of the House, although they almost certainly will not hold 60 votes in the Senate, the number needed to pass most bills in that chamber.

“If we lose the House and we lose the Senate it’s going to be a really difficult two years,” he told a crowd of about 30 donors and guests. “I’ll be spending more time with the veto pen than getting anything done.”

In his remarks, the president also took aim at the “ MAGA Republicans,” continuing his sharp attacks against former Republican President Donald Trump and his supporters, an effort that has emboldened Democrats across the country ahead of the election.

He questioned the Republican platform and touted his own achievements but came back to how the Democrats couldn’t “afford to lose this off-year election.”

Monday’s gathering raised about $2 million. The DNC said it has so far raised more than $255 million this cycle and more than $92 million so far this year, the most at this point in any year. 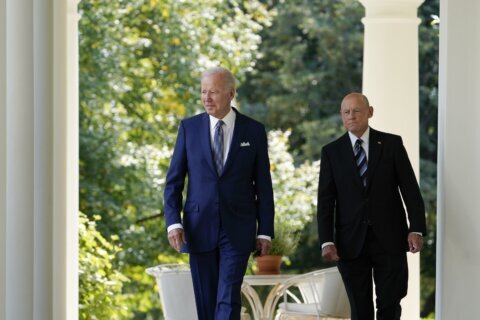