COLUMBIA, S.C. (AP) — To Democrats championing the White House’s student loan forgiveness plan, it was the long-awaited delivery of one of President Joe Biden’s campaign promises.

To Republicans — and even some in the president’s own party — it was an ill-advised move that was unfair to those who had diligently paid back their loans or decided not to go to college.

In the student debt relief plan, both parties see an opportunity to boost their own political message ahead of the critical November midterm elections. While Democrats contended that the loan forgiveness would provide a lifeline for struggling working-class families, Republicans charged that it’s a giveaway to the “elites.”

For the midterms, the elitist rhetoric tactic “plays right in line with the GOP’s current brand of grievance and victimization politics,” conservative strategist Chip Felkel said, “giving them another rallying point to fire up their base and maybe attract some like-minded independents who see this action as ‘unfair.’”

Both the White House and some of Biden’s top allies argued that it was instead Republicans who were focused on the elite and that the potential beneficiaries of the student loan debt relief include more than just the wealthy.

“Who paid the piper?” asked U.S. House Majority Whip Jim Clyburn, one of Biden’s top congressional allies, pointing to Republican-passed tax cuts for the wealthy and big corporations in 2017 under the Trump administration as the real iniquity. “I think a lot of low-income people that we are trying to help today, those families paid for that tax cut while rich people and big corporations got off tax-free. … This is an attempt on the part of this administration to once again help working families.”

The rhetoric from both parties over the student debt loan relief also likely reflects the education levels of their core constituencies, though plenty of people who attended college classes and took out student loans did not end up graduating from college.

Initially hesitant to endorse broad cancellation of student loan debt, Biden gradually embraced deeper tactics to alleviate the burden during the 2020 campaign, even expressing support for some proposals from Sen. Elizabeth Warren of Massachusetts, who made broad-based student loan debt cancellation a hallmark of her own bid.

This week, Warren applauded Biden’s plan, saying she would “keep pushing for more because I think it’s the right thing to do” but noting the significance of “what it means for the president of the United States to touch so many hard-working middle-class families so directly.” Vermont Sen. Bernie Sanders, who also campaigned in 2020 to “cancel all student debt,” called the plan “an important step forward” but said “we’ve got to do more.”

But not all Democrats were enthusiastic about the student debt loan relief, particularly those candidates facing tough races in November.

Democratic Rep. Tim Ryan, facing off in a U.S. Senate battle in Ohio against Republican JD Vance, criticized Biden’s order as unnecessary for some people and unfair to others. Saying he’s paying off his family’s own loans, Ryan said that “waiving debt for those already on a trajectory to financial security sends the wrong message to the millions of Ohioans without a degree working just as hard to make ends meet.”

Colorado Sen. Michael Bennet, in a tough reelection of his own, said the administration should have “proposed a way to pay for this plan,” adding that ”one-time debt cancellation does not solve the underlying problem.”

Republicans, meanwhile, focused on the higher-end income bracket on Biden’s student loan plan, excoriating it as a boon for the wealthy.

Senate Minority Leader Mitch McConnell, R-Ky., called the plan “student loan socialism” that is “astonishingly unfair.” He said inflation is “crushing working families” and decried Biden’s proposed fix “to give away even more government money to elites with higher salaries.”

Sen. Ron Johnson, R-Wis., who is seeking reelection, said it was “grossly unfair to families who didn’t send their kids to college or managed to pay off their student debt.”

In Florida, Gov. Ron DeSantis — campaigning for his reelection this year, in addition to laying the groundwork for a possible 2024 presidential challenge to Biden — posted on his social media accounts that “It’s unfair to force a truck driver to pay a loan for someone that got a PhD in gender studies.”

The contention that recipients of the relief plan were gender studies majors was a popular refrain among Republicans, though only a small number of students nationwide study in that field.

Largely driven by comments from conservative pundits and politicians including DeSantis and Mississippi Gov. Tate Reeves, Facebook and Instagram posts mentioning the term “gender studies” received more than half a million mentions, comments and likes in the 48 hours after Biden’s announcement, according to data from social media insights tool CrowdTangle.

The posts highlight how conservatives plan to campaign off potential frustration from millions of blue-collar workers who skipped college and might not see a benefit from Biden’s student loan debt relief order. Some of the critical Republicans, including DeSantis, hold multiple Ivy League degrees.

“This is one of the reasons we saw historic turnout for Joe Biden,” McMillan said. “And he has consistently delivered on those promises that he made to voters.”

“While progressives on the left have been pushing this for a while, I don’t think this will give them a boost in the November elections like they might hope,” he said. “Those pushing were voting for Democrats already. Attempts to satisfy the progressives will hurt some Democrats in tough races.” 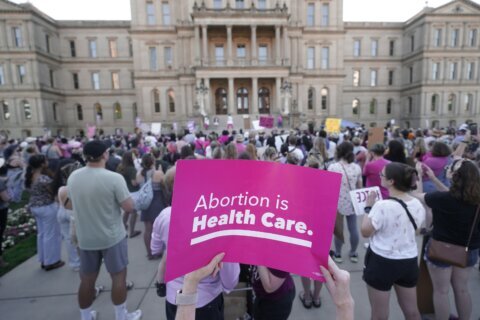