Takeaways: Trump’s mind ‘made up’ on fraud ahead of Jan. 6

WASHINGTON (AP) — The House panel investigating the Jan. 6, 2021, insurrection systemically made the case in its second hearing Monday that several of Trump’s advisers warned him against making false claims of widespread voter fraud in the 2020 election that he lost. But the president would not listen.

The nine-member panel is trying to make the case that Trump, and those allies who helped him, were deliberately lying as he pushed those election falsehoods in the weeks ahead of the violent insurrection. The rioters who broke into the Capitol that day and interrupted the certification of President Joe Biden’s victory were echoing Trump’s lies that he, not Biden, had rightfully won the election.

TRUMP’S ‘MIND WAS MADE UP’

In a series of video clips from the committee’s closed-door interviews, several of Trump’s advisers testified that they told him repeatedly he should not declare that there was widespread election fraud — and that those claims were false. But Trump increasingly relied on wild theories that were pushed by Trump lawyers Rudy Giuliani and Sidney Powell, among others, according to the testimony.

In one clip, Trump campaign manager Bill Stepien told investigators that Giuliani was urging Trump to declare victory on election night, despite warnings from Stepien and others that it was “way too early” to make a prediction like that. Stepien was scheduled to testify in person on Monday, but pulled out at the last minute because his wife was in labor, according to his attorney. The panel showed clips of his closed-door interview instead.

Despite the aides’ efforts, Trump went to the podium in the White House press room on election night and said that the early results were “a fraud on the American public” and that “frankly, we did win this election.”

The panel showed video from Trump’s daughter Ivanka Trump, her husband, Jared Kushner, and campaign aide Jason Miller. Ivanka Trump told the panel that “it was clear” the election wouldn’t be called on election night, and Kushner said he had told Trump at one point that Giuliani’s advice was “not the approach I would take.” Trump responded that he had confidence in Giuliani, Kushner said.

Miller said that Trump told a room of advisers that anyone who didn’t agree with Giuliani was being “weak.”

The committee has not released any of the full interviews with the Trump advisers or other witnesses.

Former Attorney General William Barr told the committee in a closed-door interview that the president was increasingly becoming “detached from reality” after the election.

The committee aired video from interviews with Barr in which he detailed his conversations with Trump before and after his Dec. 1 declaration to The Associated Press that there was no evidence of widespread fraud in the election. Barr gave Trump detailed explanations for why some of his theories were false.

“I told him that it was it was crazy stuff and they were wasting their time, and it was doing a grave, grave disservice to the country,” Barr told the panel.

Barr said that White House chief of staff Mark Meadows assured him that Trump was “becoming more realistic” and that Kushner had told him: “We’re working on it.”

DEBUNKING FRAUD IN THE STATES

The committee heard in-person testimony from former U.S. attorney BJay Pak, who resigned as Trump pressured Georgia officials to overturn Biden’s win in the state, and Philadelphia City Commissioner Al Schmidt, the only Republican on the city’s election board.

Pak testified that Giuliani misrepresented uncounted ballots in Fulton County, Georgia, in the weeks following the 2020 election. “The allegations made by Mr. Giuliani were false,” Pak told the panel.

Schmidt said city officials investigated Trump’s “fantastical” claims to the fullest extent, but the results did not yield into any substantial voter fraud.

Trump’s claims of fraud started well before election day. The committee showed clips where Trump previewed his strategy in speeches throughout his 2020 campaign. In August of that year, he told an audience that fraud was the only way he would lose.

Stepien told the committee that he and House GOP Leader Kevin McCarthy had met with Trump in the summer of 2020 and made a two-pronged case for why he should stop criticizing mail-in voting, which was widely used because of the pandemic. He and McCarthy told Trump that he was leaving “a lot to chance” and that there were GOP party workers on the ground who could help get mail-in votes for Trump.

McCarthy, who has declined to cooperate with the Jan. 6 panel despite a subpoena, was “echoing the same argument,” Stepien said.

“But the president’s mind was made up,” Stepien said.

Chris Stirewalt, a former political editor for Fox News Channel, made the election night call that President Joe Biden had won Arizona — a moment that prompted “anger and disappointment” in Trump’s inner sanctum at the White House, Miller said.

Testifying in person at the hearing, Stirewalt explained that the network, along with others, had expected that there would be a so-called “red mirage” at the beginning of the evening as in-person Republican votes came in, and many of the mail-in votes that would be counted later on would lean Democratic. He noted it happens every election.

Trump had not only exploited that pattern to make false claims of fraud, but contributed to it in his campaign to call mail-in voting into question.

“We had gone to pains, and I’m proud of the pains, we went to, to make sure that we were informing viewers that this was going to happen because the Trump campaign and the president had made it clear that they were going to try to exploit this anomaly,” Stirewalt said.

Members of the committee and an investigative counsel detailed how Trump and his allies raised hundreds of millions off of Trump’s false claims after the election. An “election defense fund” to contest the outcome actually ended up retiring debt, replenishing the RNC and starting the massive campaign war chest that Trump now has.

Much of that money went to the newly-created Save America PAC, not election-related litigation, an investigative counsel said in a video produced by the committee and aired at the hearing. The panel detailed how some of the dollars went to entities that directly benefitted Trump’s family and friends.

Trump campaign aide Gary Coby told the panel in a clip of a video interview that emails to small-dollar donors asking them to donate to the “official election defense fund” was a “marketing tactic.” The panel did not air his full interview.

“Not only was there the Big Lie, there was the Big Ripoff,” said Rep. Zoe Lofgren, D-Calif.

To close the hearing, the committee aired video of Trump’s supporters in Washington airing the false claims of fraud on Jan. 6.

They all appeared certain that the election was stolen. Two of them repeated Powell’s false assertions about voting machines that changed the results, claims that Barr had debunked weeks earlier.

“I don’t want to say what we’re doing is right, but if the election is being stolen, what is it going to take?” asked one rioter. 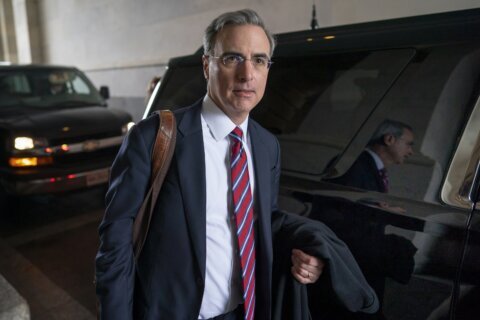