House investigators are unlikely to call former President Donald Trump to testify about his role in the Jan. 6, 2021 insurrection, relying instead on interviews with aides, family and others who were close to him at the time.
Listen now to WTOP News WTOP.com | Alexa | Google Home | WTOP App | 103.5 FM

WASHINGTON (AP) — House investigators are unlikely to call former President Donald Trump to testify about his role in the Jan. 6, 2021 insurrection, relying instead on interviews with aides, family and others who were close to him at the time.

Mississippi Rep. Bennie Thompson, the Democratic chairman of the nine-member panel investigating the attack, said Tuesday that it’s “not our expectations” to call Trump, whose supporters broke into the U.S. Capitol that day and interrupted the certification of President Joe Biden’s victory.

Thompson said the panel hasn’t made any final decisions, “but there’s no feeling among the committee to call him as a witness at this point.”

“We’re not sure that the evidence that we receive can be any more validated with his presence,” Thompson said. “I think the concern is whether or not he would add any more value with his testimony.”

The comments come as the panel prepares to hold a series of hearings in June and as members make final decisions about who to call for testimony. The committee has already talked to almost 1,000 witnesses behind closed doors or on video, including aides to both Trump and former Vice President Mike Pence who have testified about Trump’s pressure on Pence to object to Biden’s certification. But the panel hasn’t heard directly from either of the two men.

Trump is still pushing falsehoods about the presidential election, saying there was widespread fraud and that he beat Biden even though election officials across the country, federal courts and even his own attorney general rejected those claims. Pence rejected Trump’s pressure and refused to try and object as part of his ceremonial role overseeing the electoral count.

Thompson said testimony from Pence would be “significant,” but that the committee is still speaking with the former vice president’s lawyers. He said it’s unclear whether Pence will eventually sit for an interview.

“Former President Trump made a significant effort to get him to join his side, so I’m convinced that his testimony, beyond what’s already in the public record, would enhance the public’s knowledge of what went on,” Thompson said of Pence.

Much of the evidence the committee has already compiled comes from interviews with former White House aides and staff, including thousands of texts from Trump’s final chief of staff, Mark Meadows, and two of the former president’s children, Ivanka Trump and Donald Trump Jr. Both were with their father the day of the attack.

The committee last week subpoenaed House Republican Leader Kevin McCarthy and four other GOP lawmakers, seeking more information about McCarthy’s conversations with Trump the day of the attack and meetings the four lawmakers had with the White House as Trump and his aides worked to overturn his 2020 election defeat.

None of the men have said whether they will comply. McCarthy said last week that he viewed the subpoenas as political and declined to comment Tuesday on whether he had made a decision.

The other GOP lawmakers receiving subpoenas were Reps. Jim Jordan of Ohio, Scott Perry of Pennsylvania, Andy Biggs of Arizona and Mo Brooks of Alabama. The committee said the men had participated in meetings at the White House, had direct conversations with Trump leading up to the attack and were “involved in the planning and coordination of certain activities” on or before the insurrection.

McCarthy has acknowledged he spoke with Trump on Jan. 6 as the attack on the Capitol unfolded but he has not shared many details. The committee requested information about McCarthy’s conversations with Trump “before, during and after” the riot. 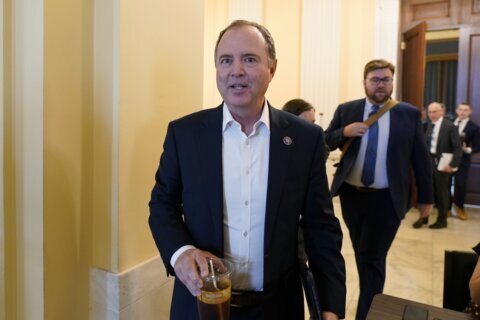