The court reversed itself after the U.S. Supreme Court in March said Evers’ maps were incorrectly adopted, and came just as candidates were about to begin circulating nominating papers to appear on this year’s ballot without being sure of district boundaries.

Democrats would have made some marginal gains under Evers’ plan, but Republicans were projected to maintain their majorities in the Assembly and Senate, according to an analysis from the governor’s office.

Evers’ map created seven majority-Black state Assembly districts in Milwaukee, up from the current six. The map from the Republican-controlled Legislature had just five.

The Wisconsin Supreme Court had adopted Evers’ map on March 3, but the U.S. Supreme Court overturned it on March 23. The high court ruled that Evers’ map failed to consider whether a “race-neutral alternative that did not add a seventh majority-black district would deny black voters equal political opportunity.”

Evers told the state Supreme Court it could still adopt his map with some additional analysis, or an alternative with six majority-Black districts. The Republican-controlled Legislature argued that its map should be implemented.

The Wisconsin court, controlled 4-3 by conservatives, sided with the Legislature.

“The maps proposed by the Governor … are racially motivated and, under the Equal Protection Clause, they fail strict scrutiny,” Chief Justice Annette Ziegler wrote for the majority, joined by Justices Patience Roggensack, Rebecca Grassl Bradley and Brian Hagedorn.

The Legislature’s maps, they wrote, “are race neutral” and “comply with the Equal Protection Clause, along with all other application federal and state legal requirements.”

Hagedorn, a conservative swing justice, initially backed Evers’ map but reversed himself once the matter came back before the court. In a separate concurrence, he wrote that the U.S. Supreme Court decision required the state court to adopt a race-neutral map, and the Legislature’s maps “are the only legally compliant maps we received.”

Assembly Speaker Robin Vos tweeted praise for the ruling, saying Republicans “have thought our maps were the best option from the beginning.”

Evers called the decision “outrageous” and said the court had backtracked on an earlier finding that the Legislature’s maps unlawfully packed Black voters to reduce their voting power.

Republicans hold a 61-38 majority in the Assembly and a 21-12 advantage in the Senate. Even under the GOP map that the state court initially rejected, they were not expected to gain a supermajority that could override any Evers veto.

The U.S. Supreme Court’s ruling in the Wisconsin case marked the first time this redistricting cycle that it has overturned maps drawn by a state.

The court has signaled it may significantly change the ground rules that govern redistricting. The court’s involvement comes after its 2019 ruling that federal courts have no role in stopping partisan gerrymandering.

In February, it stopped a ruling by a panel of federal judges requiring Alabama to redraw its maps to give Black people a better shot at selecting their representatives, saying it may need to revise the long-standing case law that governs that. It’s that case law that the high court referred to in the Wisconsin ruling.

The court declined to block maps in North Carolina and Pennsylvania. But four conservative justices wrote that they want to rule on the novel legal theory that state legislatures, rather than state courts, have supreme power in drawing maps.

While the U.S. Supreme Court rejected Wisconsin’s legislative maps, it adopted the congressional maps as proposed by Evers. Republicans currently hold five of the state’s eight seats. That map made one of those GOP districts more competitive.

Redistricting is the process of redrawing political boundaries based on the latest census. Mapmakers can create an advantage for their political party by packing opponents’ voters into a few districts or spreading them among multiple districts — a process known as gerrymandering. 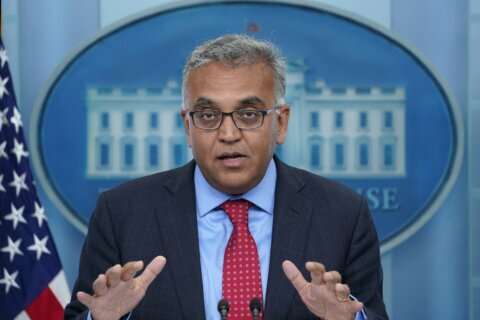