WASHINGTON (AP) — More than 50 Republicans who once joined a lawsuit claiming the House’s pandemic-era proxy voting was unconstitutional have themselves voted by proxy this year, remotely without showing up.

Across the aisle, Rep. Kai Kahele, a working Hawaiian Airlines pilot as well as a Hawaii congressman, has used proxy votes on all but five of this year’s 125 roll calls. Three of his Democratic colleagues have used the proxy procedure for every vote.

They’re among 303 lawmakers of both parties — more than two-thirds of the House — who have cast votes by proxy at least once this year, according to an Associated Press look at records that reflect how partisan divisions over voting from somewhere else have moderated.

The AP numbers show that overall, 191 Democrats, nearly 9-in-10, and 112 Republicans, just over half, have used proxy votes this year, cast by colleagues present in the chamber. While Democrats had previously used proxies heavily, just a handful of Republicans did so in 2020, the year the procedure began.

Of the House Republicans who’ve voted remotely this year, 54 had signed onto a 2020 lawsuit that asserted it was “simply impossible” to ignore the Constitution’s requirement that lawmakers vote in person.

Congress “has never before flinched from its constitutional duty to assemble at the Nation’s Capital and conduct the people’s business in times of national peril and crisis,” the GOP filing stated, citing the War of 1812 torching of the Capitol, the Civil War, the 1918 Spanish flu and the Sept. 11 terrorist attacks. “So it was for more than two centuries. Until now.”

That litigation was brought by 160 House Republicans led by Minority Leader Kevin McCarthy of California. McCarthy later told colleagues that if they vote remotely they should not be plaintiffs, and ultimately just one remained on the suit with him, Chip Roy of Texas.

The Supreme Court refused to hear the case in January without comment after it was dismissed by lower courts.

As for Democrat Kahele, his congressional website says he is “an active commercial airline pilot with Hawaiian Airlines,” flying domestic and international trips on Airbus A330 widebody aircraft.

In a statement, aides said Kahele has piloted three flights this year. Like everyone voting by proxy, he’s submitted required letters attesting he was “unable to physically” vote at the Capitol, citing “the ongoing public health emergency.”

Due to the threat of COVID-19, Kahele, 48, is “concerned for the health and safety” of his communities and family, with whom he lives in “a multigenerational home,” the statement said. A freshman who’s expressed interest in running for governor, Kahele has curtailed his travel to the Capitol but not missed a vote and “maximizes his time back home” by meeting constituents, it said.

The House approved proxy voting on a near party-line vote in May 2020, as the deadly COVID-19 virus began upending activities everywhere. Democrats called the move a way to keep Congress functioning safely, while Republicans disparaged it as an abandonment of its work.

That first year, 175 Democrats but just seven Republicans used it, according to data compiled by the nonpartisan Brookings Institution. And while GOP participation has grown, proxies remain more heavily utilized by Democrats.

Of the 125 House roll calls so far this year, Republicans who’ve voted by proxy have done so an average of 19 times each, the AP figures show. Democrats have averaged 28 apiece.

McCarthy has repeatedly expressed a goal of ending proxy voting should Republicans win the House majority in November’s elections, saying it’s time for lawmakers “to show up to work.” House Speaker Nancy Pelosi, D-Calif., most recently extended the procedure until May 14.

The 100-member Senate, far smaller than the House, has not adopted proxy voting.

The procedure has helped Pelosi manage her party’s narrow majority by making it less likely Democrats will miss votes. Pelosi called the GOP’s failed lawsuit a “sad stunt” that threatened to “recklessly endanger the health of colleagues” and congressional workers.

Rep. Louie Gohmert, R-Texas, who’s now running for state attorney general, has cast 61 proxy votes this year, the most among Republicans who had joined McCarthy’s lawsuit. Aides did not return messages seeking comment.

Also evolving are the reasons lawmakers use the process, initially created to reduce their risks of getting or spreading COVID-19.

Rep. Ilhan Omar of Minnesota was among several Democrats at a racial justice demonstration in her state in April 2021 while voting by proxy. That February, Rep. Madison Cawthorn, R-N.C., was in a group of hard-right lawmakers who voted by proxy while at a conservative political conference in Florida that Trump attended.

Cawthorn criticized proxy voting in July 2020, tweeting, “Leaders show up no matter how uncertain the times are. The Democrats are cowards for hiding and not showing up to work.”

Cawthorn has voted 57 times by proxy so far this year, the AP’s count showed. He did so 69 times in 2021, according to Brookings, his first year in Congress. An aide declined to respond to questions.

Three Democrats have used proxies for every 2022 vote: Reps. Al Lawson of Florida, Lucille Roybal-Allard of California and Albio Sires of New Jersey.

Roybal-Allard’s nearly 77-year-old husband is immunocompromised, a statement provided by an aide said. It said the 80-year old congresswoman was in her Washington office this month but did not vote in the House chamber because of the recent omicron surge and the House’s abandonment of its requirement for mask-wearing there.

Spokesperson Erica Daughtrey said Sires, 71, has remained in New Jersey this year, citing health concerns including his age, his wife’s surgery and his own upcoming knee replacement.

Roybal-Allard and Sires are not seeking reelection in November. Lawson’s district has been redrawn by Florida GOP Gov. Ron DeSantis under a plan expected to be finalized this week that would make Lawson’s reelection considerably harder.

The 77 proxy votes so far this year by Rep. Maria Elvira Salazar, R-Fla., are the most among Republicans. In a statement, she said she is an only child and main caretaker for her 86-year-old mother, who became ill last year.

“Without knowing how much time we have left together I want to be there for her,” Salazar saod.

Kahele, the lawmaker and pilot, serves on the House Transportation and Infrastructure Committee, which oversees aviation issues. He is a co-sponsor of the bipartisan Fair and Open Skies Act, which would curb the ability of foreign carriers to fly in the U.S.

Kahele’s office provided an email exchange in which his aides were advised by House Ethics Committee staff that outside employment was allowed if it didn’t interfere with his congressional duties and his earnings met outside income limits.

The email exchanges show Kahele was advised he can vote on issues in which he doesn’t have a “direct personal or pecuniary interest.”

Pressed about the propriety of serving on a committee that oversees airline policy, aides sent a statement citing his experience as a military and commercial pilot and his advocacy for “the rights of all aviation workers and union members.” Kahele has been a member of the Air Line Pilots Association. 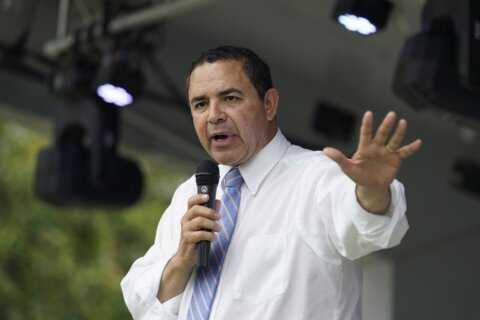 Cuellar, Cisneros runoff in Texas remains too early to call