Jared Kushner, former President Trump’s son-in-law and senior adviser in his White House, is expected to appear before the committee investigating the January 6 attack at the U.S. Capitol, multiple sources familiar with the matter tell CBS News.

Kushner was not physically at the White House on January 6, though he had significant influence within the administration. He was returning to Washington from a trip to Saudi Arabia, where he was working on negotiations between Gulf Arab leaders. He did not return to the White House that day.

The committee asked Kushner’s wife, Ivanka Trump, to appear for testimony in a January letter that cited her presence with her father in the White House that day, as well as in the Oval Office during a phone conversation Mr. Trump had with Vice President Mike Pence that morning. As recently as late February, a spokesperson said she was in discussions with the committee to voluntarily appear for an interview.

A spokesman for the committee declined to comment, and a spokesperson for Kushner could not be reached for comment. 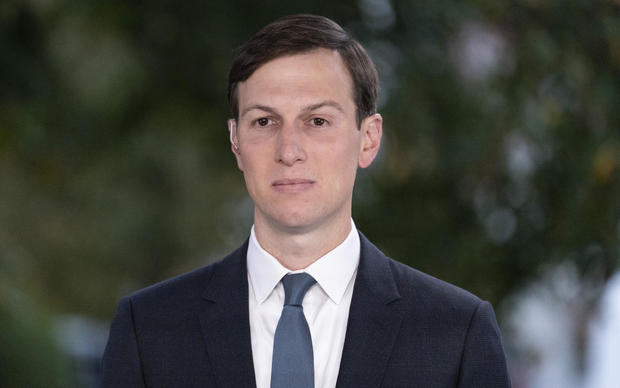 Jared Kushner does a television interview at the White House on Oct. 26, 2020, in Washington.

Though Kushner was not among the vocal supporters of the president claiming widespread fraud in the 2020 election, he was possibly on the receiving end of those advocating for action. In a text message to then-White House chief of staff Mark Meadows obtained by CBS News, conservative activist Ginni Thomas, the wife of Supreme Court Justice Clarence Thomas, wrote, “Just forwarded to yr gmail an email I sent Jared this am.” It’s not clear who she’s referring to.

The news of Kushner’s testimony came on the heels of a victory for the committee: A federal judge in California on Monday ordered conservative attorney John Eastman to turn over a tranche of emails they had sought, and found that former President Donald Trump “more likely than not” illegally tried to impede official congressional proceedings on the day of the attack.

The committee will be voting Monday night on whether to recommend to the House that two former Trump aides be held in contempt of Congress for refusing to comply with subpoenas from the committee. The committee issued a report late Sunday recommending the nine-person committee move forward on holding the pair, Peter Navarro and Dan Scavino, in contempt. The vote is likely to be approved, since the committee is comprised of seven Democrats and two Republicans, who both support investigating the former president.

The committee has issued more than 90 subpoenas, including ones to Trump’s allies, former White House officials, campaign aides and individuals involved in the planning of the rally outside the White House before the Capitol building came under siege. Two top Trump allies, Steve Bannon and Meadows, have been held in contempt of Congress for refusing to comply with subpoenas, and the Justice Department has charged Bannon. Both said they are following instructions from Trump, who has claimed executive privilege.

House Speaker Nancy Pelosi created the House select committee last year to investigate the January 6 attack, when thousands of Trump supporters descended on the Capitol as Congress counted the electoral votes, a largely ceremonial final step affirming Mr. Biden’s victory. Lawmakers were sent fleeing amid the riot, which led to the deaths of five people and the arrests of hundreds more. Trump, who encouraged his supporters to “walk over” to the Capitol during the rally at the Ellipse before the electoral vote count, was impeached by the House one week later for inciting the riot but was later acquitted by the Senate.