Biden signed an Equal Pay Day executive order that encourages — but does not order — the government to consider banning federal contractors from seeking information about job applicants’ prior salary history. The Labor Department also issued a directive aimed at strengthening federal contractors’ obligations to audit payrolls to help guard against pay disparities based on gender, race or ethnicity.

“It’s my hope that it sets an example for all private companies to follow as well,” Biden said after signing the executive order. “Gender equality is not a women’s issue alone. It benefits everybody.”

The Office of Personnel Management was directed to consider a regulation to address the use of prior salary history in hiring and setting compensation for federal workers.

Equal Pay Day is designed to call attention to how much longer women must work to earn what men earn.

Data show that while the pay gap is at its smallest ever, the coronavirus pandemic has altered women’s labor force participation so that “what we’re seeing is an artificial narrowing,” said Jasmine Tucker, director of research at the National Women’s Law Center.

For instance, women who remained in the labor force during the pandemic and worked full time often had higher earnings than their counterparts who lost low-paying jobs, so 2020 figures should not be compared with wage gap data from prior years, Tucker said.

The cloud of the pandemic cast a shadow over this year’s Equal Pay Day events at the White House — which included speeches by prominent activists and a familiar Biden administration refrain for workers to join unions.

“Over the past two years, the pandemic has only deepened these inequities, as caregiving has become more expensive and more difficult to find,” Vice President Kamala Harris said at an afternoon event.

“Over a 40-year career, a woman will lose out on about $400,000. For Black women, Latina women, Native American women, that loss in wages is closer to $1 million,” Harris said.

The White House Equal Pay Day summit was attended by Cabinet members, company executives and players from the U.S. women’s soccer team, who recently won a $24 million settlement with U.S. Soccer in a discrimination dispute.

The settlement includes a commitment to equalize pay and bonuses to match the men’s team.

“I think the more we connect our stories, the more we literally connect with each other,” she said, ”if I’m seeing myself in union workers in Alabama and they’re seeing themselves in us or our team, it’s all kind of the same thing because we’re all dealing with the same issue.”

Among other issues, the Biden administration wants to combat occupational segregation to get women better access to well-paying jobs, which tend to be male-dominated.

Treasury Secretary Janet Yellen said fair pay efforts have a major impact on the economy, as “some research suggests that if women received a fair paycheck, poverty for working women would be reduced by half.”

Tucker said there is a long way to go to achieve equal pay — especially after the pandemic.

There were in excess of 1.1 million fewer women in the labor force in February 2022 than in February 2020, which means they are neither working nor searching for employment.

“There was a particular shedding among low-paid workers, and what was left was middle- and higher-paid workers who were insulated from the pandemic,” Tucker said.

In 2020, the average woman who worked full-time all year earned 83 cents on the dollar compared with a male colleague doing the same work, according to the White House. The gap is even bigger for Black and Native American women and Latinas.

The issue also impacts women later in life. A 2020 Brookings Institution study on women’s retirement found Social Security benefits for women are, on average, 80% of those for men. 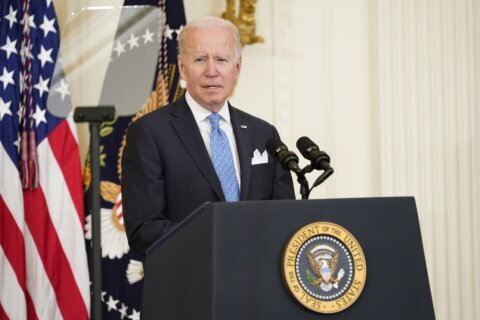