WASHINGTON (AP) — On a somber day of remembrance at the U.S. Capitol, it was the most unlikely of receiving…
Listen now to WTOP News WTOP.com | Alexa | Google Home | WTOP App | 103.5 FM

WASHINGTON (AP) — On a somber day of remembrance at the U.S. Capitol, it was the most unlikely of receiving lines: Democrats lining the floor of the House, waiting for their chance to greet Dick Cheney.

Yet there he stood, the former Republican vice president that Democrats have fiercely opposed and frequently reviled, sharing warm moments after the House held a moment of silence to commemorate the deadly violence of one year ago in a building where he once served.

That Cheney was the catalyst for rare bonhomie between Republicans and Democrats was a clear measure of how far his party has veered from the traditional GOP orthodoxy into the decidedly unorthodox grip of former President Donald Trump.

Cheney and his daughter, Rep. Liz Cheney, R-Wyo. were the only two Republicans to attend a pro forma session of the House on the anniversary of last year’s riot at the Capitol. They sat together in the front row on the Republican side of the chamber as House Speaker Nancy Pelosi thanked the U.S. Capitol Police for defending them on Jan. 6 and allowing Congress to “defeat the insurrection.”

Republican leaders were absent. The former vice president, who served in leadership in the House as a congressman from Wyoming in the 1980s, took note.

“Well, it’s not a leadership that resembles any of the folks I knew when I was here for 10 years,” Cheney told reporters afterward.

Cheney’s daughter, Liz, has been ostracized by her fellow House Republicans for her criticism of Trump and her support for his impeachment after the insurrection. In May, the House GOP dumped her from the No. 3 leadership post for her persistent repudiation of Trump’s election falsehoods.

Asked if he was disappointed by it, Dick Cheney replied: “My daughter can take care of herself.”

She’s found common cause with Democrats like Rep. Adam Schiff, a Democrat on the panel who led Trump’s first impeachment. He was among those greeting the Cheneys on the floor.

“I was talking to Liz, and she said, ‘this is my father.’ I didn’t recognize him with a mask on.”

“We were discussing what a sad moment this is in the country, what a trying time it is, and the fact that things are more at risk in terms of our democracy now than a year ago. I told him how courageous his daughter had been and how much respect we have for her.”

“I told him, thank you for being here, how proud I am of his daughter, and I know he is as well, for having the courage to stand up for truth,” Hoyer said.

“We were appreciative of the fact he’s here supporting his daughter in what is otherwise a very significant minority position in the Republican Party, which is very sad,” Hoyer said.

Pelosi also spoke with Cheney briefly in the House chamber. The two have waged scores of political battles over the years. She became the first female House speaker during President George W. Bush’s second term and she sat on the dais next to the vice president as Bush proclaimed in 2007 that it was his pleasure to become the first president to begin a State of the Union address with the words “Madam Speaker.”

“I was happy to welcome him back and to congratulate him on the courage of Liz Cheney,” Pelosi said.

Dick Cheney also issued a formal statement after the House session, saying the importance of Jan. 6 as an historic event cannot be overstated.

“I was honored and proud to join my daughter on the House floor to recognize this anniversary, to commend the heroic actions of law enforcement that day, and to reaffirm our dedication to the Constitution,” Cheney said.

“I am deeply disappointed at the failure of many members of my party to recognize the grave nature of the January 6 attacks and the ongoing threat to our nation.”

Schiff said the appearance of the former vice president was a reminder of a different political era.

“That was a time when there were broad policy differences, but there were no differences when it came to both parties’ devotion to the idea of democracy. And that seems like such a quaint time now.”

“I look forward to the day when we get back to a Republican Party that’s once again a party of ideas and ideologies.” 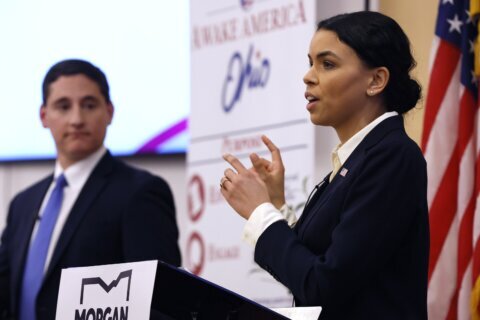