US pulls out of settlement talks in family separation suits

WASHINGTON (AP) — The U.S. government withdrew Thursday from settlement negotiations to end lawsuits filed on behalf of parents and children who were forcibly separated under the Trump administration’s zero-tolerance border policy.

Justice Department officials informed lawyers for the plaintiffs in a conference call that the government would not offer a global settlement in family separation cases and will defend each one in court, said Lee Gelernt, an attorney with the American Civil Liberties Union, which filed one of the suits.

The decision comes after eight months of negotiations and weeks after reports of a proposed settlement that would include payments of several hundred thousand dollars to each family sparked outrage among Biden administration critics in Congress and elsewhere.

Gelernt said no explanation was given. “It’s hard to understand DOJ’s decision other than it was influenced by political considerations,” he said.

The Justice Department suggested in a statement that settlements were still possible despite its withdrawal from the talks.

“While the parties have been unable to reach a global settlement agreement at this time, we remain committed to engaging with the plaintiffs and to bringing justice to the victims of this abhorrent policy,” it said.

About 5,500 children were forcibly removed from their parents in 2018 under President Donald Trump as his administration sought to stop an increase in people crossing the U.S.-Mexico border with criminal prosecutions, even if the migrants were presenting themselves to authorities to seek asylum as permitted under the law.

The parents of hundreds of children have still not been located.

Trump halted the practice in June 2018 amid widespread outrage, including from many Republicans, just six days before a judge ordered an end to the program in response to a lawsuit filed by the ACLU.

The settlement talks with the ACLU and attorneys for hundreds of other plaintiffs had proceeded quietly until The Wall Street Journal reported in October that the Justice Department was considering paying about $450,000 to each person affected by the policy. The Associated Press later confirmed the figure had been under consideration.

The suits filed under the Federal Tort Claims Act are intended in part to help compensate families for the psychological damage of the separation, but critics argue it would reward people for illegally crossing the border.

“Little children were deliberately abused by our government, yet the Biden administration is now going to defend the practice in court,” Gelernt said. “That is shameful.”

The American Immigration Council, which filed suit on behalf of a group of mothers and children who were separated while seeking asylum, said it would continue to pursue its case. “We are committed to doing everything we can to bring these families justice,” said Kate Melloy Goettel, the organization’s director of litigation.

Biden has found himself in a tough spot politically on immigration. His administration has reversed some Trump actions aimed at stemming illegal border crossings as well as legal immigration while confronting a sharp rise in the number of people seeking to enter the U.S. along the southwest border.

Asked about the amount on Nov. 3, Biden appeared to misunderstand the question and said a payment of about $450,000 per person was “not going to happen.” He later said he supported a settlement, without specifying an amount.

The ACLU attorney said the Biden administration could find itself in an awkward spot because its lawsuit and one other name as defendants not just the U.S. government but senior Trump administration officials, including former senior adviser Stephen Miller and former Attorney General Jeff Sessions, as well.

“Not only is the Biden administration going to be in court defending this practice for the United States, but it is also going to be standing up in court to defend the actions of individual Trump officials who devised the policy,” Gelernt said. 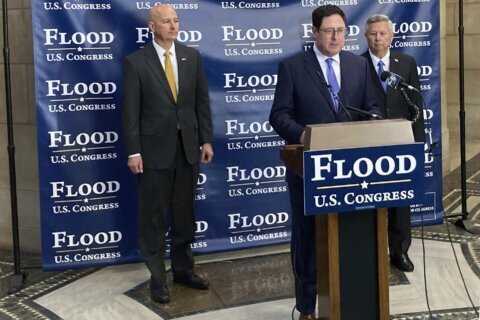