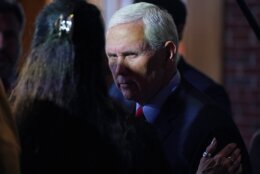 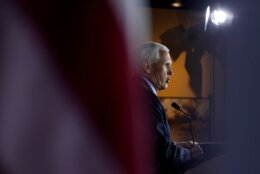 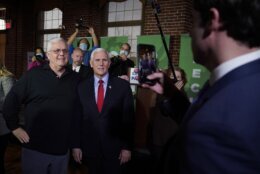 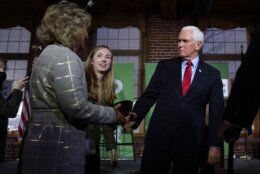 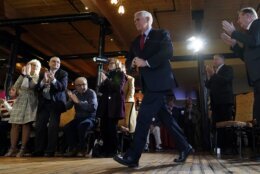 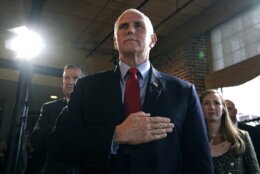 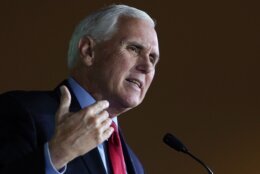 MANCHESTER, N.H. (AP) — There were all the trappings of a day on the presidential campaign trail: a fundraiser, schmoozing with local activists, holiday parties and a visit to a local bakery, where the potential candidate posed for pictures and bought a slice of cake.

But former Vice President Mike Pence insisted his tightly scheduled swing through New Hampshire on Wednesday was simply focused on next year’s midterms, when control of Congress is at stake.

“To be honest with you, all of my focus is on 2022 because I think we’ve got a historic opportunity for not just a winning election, but a realignment election,” he told The Associated Press. “So I’m dedicating all of my energy to the process of really winning back the Congress and winning statehouses in 2022. And then in 2023, we’ll look around and we’ll go where we’re called.”

Pence’s approach belies the fact that he isn’t just any Republican courting the voters and activists in this state that helps decide presidential nominations. He’s arguably tied more closely to former President Donald Trump than any other Republican eyeing the White House. While that should be a boon in a party dominated by Trump loyalists, it’s a unique vulnerability for Pence, who is blamed by some supporters of the former president who wrongly believe he could have prevented Joe Biden from assuming the presidency in January.

Adding to the complexity is the prospect that Trump may also run again in 2024. At least for now, polls suggest he would run away with the GOP nomination.

That leaves Pence, whose life was threatened by Trump supporters at the Jan. 6 insurrection at the U.S. Capitol, in a bind. Some fellow Republicans considering a campaign, including former U.N. Ambassador Nikki Haley, have said they won’t run if Trump moves forward. Others, such as former New Jersey Gov. Chris Christie, have dismissed the notion that a Trump candidacy should automatically clear the field.

Pence is opting for a middle ground, spending much of his time talking up his and Trump’s time in office and insisting the two parted ways on good terms. In interviews, for instance, he declined to take a side in the GOP primary for governor in Georgia, which features incumbent Brian Kemp against Trump-backed challenger and former Sen. David Perdue. He similarly sidestepped the question of what Trump’s calculations mean for him.

But he’s clear that he’s not waiting for his old boss to make a decision as he travels the country, delivers speeches and raises money.

“Come 2023, we’ll reflect, we’ll pray and we’ll respond to that calling, whatever that is,” he said.

Much of Trump’s base remains livid that Pence refused the former president’s demand to block certification of the 2020 election — something he did not have power to do. And critics of Trump are unlikely to embrace a man who almost never voiced disagreement with the former president and who continues to yoke himself to that administration.

Still, on Wednesday, Pence was greeted warmly during his second New Hampshire visit since leaving office.

In a speech sponsored by the conservative Heritage Action organization, Pence blamed Biden for the country’s soaring inflation and railed against the roughly $2 trillion social and environmental bill that is being considered in Congress.

“Keep your hands off the American people’s paychecks,” he demanded.

At the Simply Delicious bakery in Bedford, Pence greeted customers and posed for selfies. The bakery was featured in ads from the Coalition to Protect American Workers, a conservative group run by Pence’s former chief of staff, Marc Short, and fined for violating COVID-19 mask regulations.

“We miss you very much,” the bakery’s owner, Alexa Firman, told Pence as the two chatted and posed for photos.

After four years of playing second fiddle to Trump, Pence’s increasingly busy schedule of travel and speeches gives him what aides see as an opportunity to reassert himself as the frontman.

“For four years he played a different role,” said Short. “He had a role to advance the president’s policies and to articulate them. And now he’s in a position to speak more freely.”

But after so much deference, it remains unclear whether Pence can emerge from Trump’s shadow and make a compelling case to voters that he should be the future of a party that has been so dramatically redrawn in the former president’s image.

In interviews, voters who attended the events generally praised Pence but didn’t express the kind of unbridled enthusiasm often reserved for Trump.

“I think he’s a reasonable candidate. I’m personally in favor of any Republican who has Trump’s policies without Trump’s personal ego,” said Fred Yocum, of Brentwood, New Hampshire. “I think there are a lot of really good candidates potentially out there. And Mike Pence is certainly one of those.”

Edie Olson, a lumber building materials supplier from Nashua, said it was too soon for him to have taken stock of the potential field, but he, too, is ready for an alternative to Trump.

“I think it’s time for a professional politician once again,” he said. “Leave it to the professionals.”

Bill Ohm, who also lives in Nashua and is running to represent the area as a state representative, praised Pence as “a really solid guy. He’s kind of like the quiet, thoughtful guy that you can count on. He’s not blusterous, but he’s very very competent.”

But while he said that, in looking for a president, “you want a guy who’s going to be calm and disciplined,” he said if Trump runs again, he’d likely back him instead.

“I’d probably vote for Trump because I think he’s got a little more experience in the big chair. I mean, Mike’s got a great background in solving problems. But I think dealing with the world’s problems, you’ve got to have a guy who can be a little tougher than most people,” he said.

Pence, meanwhile, continues to confront the fallout from the insurrection.

He has repeatedly defended his actions, saying he upheld his constitutional duty and had no choice but to count the Electoral College votes. On Wednesday, he again acknowledged in a radio interview that he and Trump may “never see eye to eye” on what happened that day, when he and his family were forced into hiding as the riotous mob of Trump supporters violently stormed the Capitol building, some chanting “Hang Mike Pence.” At the same time, he told several news outlets “there were irregularities that happened at the state level,” even though no evidence has emerged of any serious fraud.

As if on cue, Trump knocked Pence yet again during his New Hampshire swing, issuing a statement calling him a “good man,” but someone who made a “big mistake on not recognizing the massive voter fraud and irregularities.”

Pence has also paid recent visits to other early-voting states such as Iowa, South Carolina and Nevada. He’s been writing a book, delivering paid speeches and fundraising on behalf of Republican candidates — making friends and building relationships with donors who could help him down the line.

He’s also recording a weekly podcast, “American Freedom,” as part of his work with Young America’s Foundation, in addition to running his own issues advocacy group, Advancing American Freedom.

Chris Ager, a member of the Republican National Committee from New Hampshire who spent time Wednesday with Pence, said that while the state’s primary is more than two years away, election season has begun.

“This is campaign season for 2024. It’s already started,” he said. And while some are waiting for Trump to move, others “are doing the smart thing by preparing so they can keep their options open, regardless of what President Trump does. That seems to me like a very savvy thing to do.” 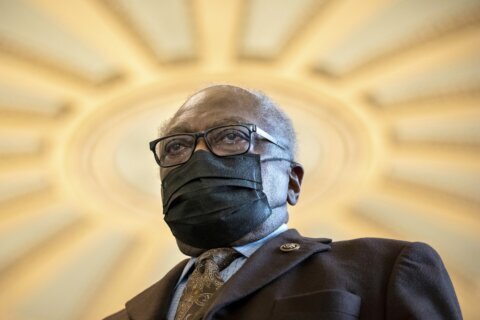