The Justice Department said on Thursday it's giving $139 million to police departments across the U.S. as part of a grant program that would bring on more than 1,000 new officers.
Listen now to WTOP News WTOP.com | Alexa | Google Home | WTOP App | 103.5 FM

WASHINGTON (AP) — The Justice Department said on Thursday it’s giving $139 million to police departments across the U.S. as part of a grant program that would bring on more than 1,000 new officers.

The grant funding comes through the Justice Department’s Office of Community Oriented Policing Services and will be awarded to 183 law enforcement agencies across the country and in U.S. territories. The funding is meant to help police departments reduce crime and to encourage community policing.

“We are committed to providing police departments with the resources needed to help ensure community safety and build community trust,” Attorney General Merrick Garland said in a statement.

The grant awards come as police departments across the U.S. have been facing budget reductions, with cities struggling with ballooning costs from the coronavirus pandemic and national calls to reduce police funding in favor of spending more money on social services. Several police agencies have also delayed or canceled police academy classes, which is likely to leave a number of jobs unfilled as other officers retire.

The Justice Department said it received nearly 600 applications from police departments in nearly every state and U.S. territory. The grant requires that the money be used to hire additional officers, other than those who would normally be hired using a police department’s operating budget.

The money is given directly to police and sheriff’s departments to hire the new law enforcement officers. The Justice Department says half of the agencies plan to use the money “to focus on building legitimacy and trust between law enforcement and communities,” while others will use it to build mental health programs or focus on violent crime — a Justice Department priority.

The money is being provided to police departments both large and small. For example, the grant provides funds for an additional 50 officers in San Francisco, Chicago, Cincinnati and Houston. New Orleans, Cleveland and St. Paul, Minnesota, would receive 30 new officers, and other smaller forces receive a few new officers.

Besides funds for hiring, Justice Department policing grants also provide funding for local, state and tribal law enforcement agencies to enhance community policing, in which agencies use relationships with community leaders to establish dialogues about needs and identify residents’ concerns. 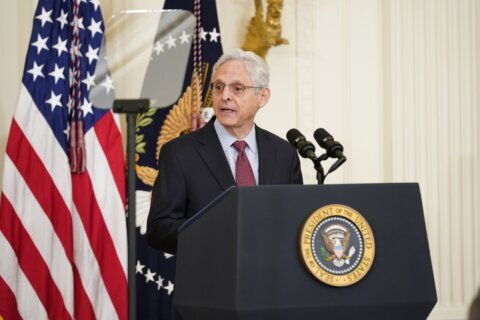