COLUMBUS, Ohio (AP) — Shontel Brown’s surge came almost out of the blue. Over just a few weeks, she surmounted a double-digit lead that progressive Nina Turner had built over months and easily won the Democratic nomination for a Cleveland-area congressional seat.

But her victory Tuesday was the product of years of careful work making a name in local politics and creating a network of support from establishment Democrats. That establishment, including Rep. Marcia Fudge, who left the seat to join the Biden administration, lined up firmly behind her and pushed hard to defeat the more strident progressive flank.

Brown criticized Turner, a popular surrogate during Sen. Bernie Sanders’ presidential campaigns, as divisive and has pledged to be a bridge builder. In an interview with The Associated Press on Wednesday, Brown emphasized the importance of working together, both within the Democratic Party and with Republicans, in an implicit criticism of Turner and progressives in Washington. She also highlighted how local legislators, not political heavyweights such as Hillary Clinton, ultimately led her to her victory.

This interview has been edited for clarity.

AP: During your campaign, you suggested that Nina Turner would further exacerbate the nation’s political divide, while you would work to bring people together. Do you intend to work with Democratic progressives in Congress, as well as Republicans? Do you consider yourself a progressive?

BROWN: I absolutely intend to work with everyone. I think it’s very interesting that Congress is the only place where people expect their colleagues to not get along. … And when people ask about whether I consider myself a progressive or a moderate, I like to describe myself as a humble public servant. When people are asking for food assistance or rental assistance or how to get their hands on a PPP loan, they never end the call with “oh, by the way, are you a moderate or progressive?” So I don’t ascribe to any of the labels. I am a proud Democrat who works tirelessly for the people who are trusting me to make decisions on their behalf.

AP: You mentioned rental assistance. Obviously, the CDC issued a new eviction moratorium this week that would last until October. Would you have joined congresswoman Cori Bush in the camp-out protest if you were in Congress?

BROWN: It’s easy to say what you would do, hypothetically. But I am grateful for the work that she did to be able to get that moratorium extended. I’ve not been much, candidly speaking, of an activist. … I know that is something she has been very proud to be and I respect that wholeheartedly. But I really pride myself on being a legislator — one who sits at the table to negotiate on the behalf of the people who are trusting me to make decisions.

AP: Turner attributed your victory to “the influence of dark money.” Were you comfortable with the amount of money spent on electing you by outside groups, or did they have an outsize influence on Ohio voters in this race?

BROWN: I honestly am not sure how much money any of the outside groups raised — the ones that were campaigning against her or me. But let’s be clear, she also had an ally smearing or at least alleging very negative things about my campaign, and she also had twice as much money: $5 million. I don’t think this race was decided by money. I think it was decided by the people who deliver results and people who are willing to work and really willing to work collaboratively. This is a sport by addition, not subtraction. And so when you have friends and you’re able to work with others, I think that proved to be a successful formula to get me to this place called victory.

AP: Some of your allies and supporters cast your victory as proof that some in the media, liberal activists and liberal Twitter are out of touch with the views of Democratic voters. Do you agree with that?

BROWN: I think there’s certainly some room for other voices at the table, for sure. And I’ve been hyperfocused on trying to find that common ground: Where can we meet together so that we can make progress? That’s been my focus. I’m not one that looks for the dividing point but really looking for the uniting point.

AP: You’ve mentioned how you are a local legislator. You have spent time in local office and spend a lot of time with the community. (The 11th District) is the second poorest congressional district in the country. The (functional) illiteracy rate (in Cleveland) is 66%. Your general election opponent, Laverne Gore, faults Democrats for those problems. She says they have supported policies that keep people, particularly people of color, dependent on government rather than helping them to be independent, because it provides them a political advantage. Is she right?

BROWN: I think that (Gore) might be a little bit out of touch with what’s happening here in Ohio. Ohio has been under Republican leadership for a very long time. So if there are any issues with our statewide government, I think there’s enough blame to go around. But certainly, under the leadership of the Republicans, I would have to agree that we could really reevaluate how we’re allocating our resources for students, which has been deemed unconstitutional. … But again, I’m not one to really place blame. Let’s figure out how we get to a solution to make education and literacy priorities and deal with these economic issues.

AP: Last night, you said many of the things you’ve accomplished on County Council have not gotten a lot of attention, but you did them because they served the public. Can you give us a few examples?

BROWN: When it comes to public safety, having modernized our emergency system to include text 911; being the only candidate in this race to oversee the allocation of over $200 million in COVID relief funds and how it would be allocated to hospitals, small businesses, banks, rental assistance programs and most notably when our students had to transition from the classroom to virtual learning, I led the initiative to request $1.5 million be set aside so that they could receive Wi-Fi hotspots.

Farnoush Amiri reported from Anaheim, Calif. Amiri is a corps member for the Associated Press/Report for America Statehouse News Initiative. Report for America is a nonprofit national service program that places journalists in local newsrooms to report on undercovered issues. 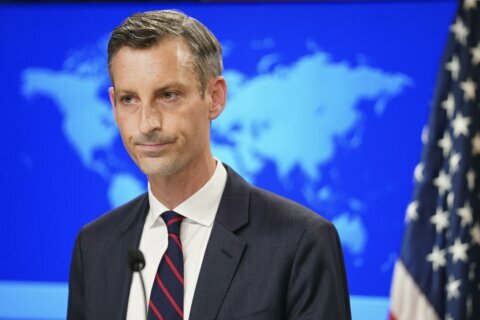