With Democrats facing formidable prospects in the battle to retain both chambers of Congress, the virus rescue package may be the party's best opportunity to argue their work in Washington had a positive, tangible effect on communities across the country during a time of historic crisis.
Listen now to WTOP News WTOP.com | Alexa | Google Home | WTOP App | 103.5 FM
(1/5) 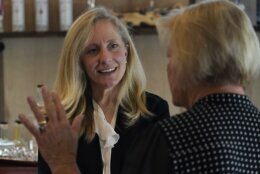 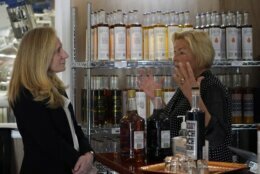 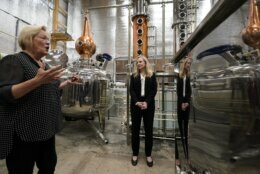 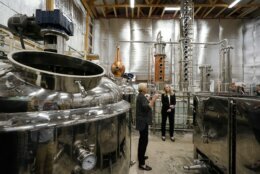 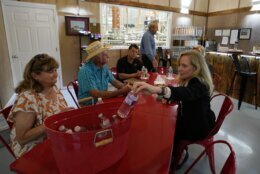 MAIDENS, Va. (AP) — When Sherry Brockenbrough and her family opened a distillery on a leafy vista overlooking the James River on March 5, 2020, the coronavirus still seemed like a distant threat.

But in the coming weeks, Hill Top Distillery faced the kind of barriers few businesses could survive and almost none had prepared for. By the thousands, restaurants, breweries and distilleries across the country would largely shutter.

Brockenbrough moved to swiftly adapt, replacing tasting room gatherings with curbside pickup and outdoor, distanced activities. Still, she was not close to meeting her financial goals and the distillery hasn’t turned a profit, leaving the 63-year-old Brockenbrough and her husband, John, to pump even more of their savings into the business to keep it going.

“It’s a really scary place to be with no money coming in,” she said.

Her business was sustained in part by money that came from the $1.9 trillion American Rescue Plan, the pandemic relief legislation that Congress passed in March solely with Democratic votes. She is using the funds to buy new equipment and make improvements to the property, investments she hopes will lure customers interested in her vodka, whiskey and moonshine.

“We are grateful,” Brockenbrough said. The funds “take the edge off. You’re not hitting the panic button going ‘okay now what?’”

This summer, Democrats are also hoping they get a return on the investment in businesses like Brockenbrough’s. With Democrats facing formidable prospects in the battle to retain both chambers of Congress, the virus rescue package may be the party’s best opportunity to argue their work in Washington had a positive, tangible effect on communities across the country during a time of historic crisis.

The sense of urgency is growing as other ambitious pillars of the Democratic agenda, ranging from the protection of voting rights to a far-reaching infrastructure package and reforms of policing, gun rights and immigration, are at risk in an evenly divided Senate. That raises the prospect that the rescue package may emerge as the most significant piece of legislation for Democrats to campaign on next year.

That could be crucial in some of the nation’s most narrowly divided congressional districts that may decide control of the House, including this one that stretches through 10 counties of suburbs and rural communities in central Virginia. Republicans need a net gain of just five seats to retake the House next year and are eyeing this district, currently represented by Democrat Abigail Spanberger, as a prime pickup opportunity.

As they make their sales pitch, Democrats are aiming to avoid a repeat of the perceived mistakes of former President Barack Obama’s administration, when policy accomplishments on health care, taxes and the economy didn’t translate into easy political wins. Democrats suffered dramatic losses in the first midterm after Obama’s election, and the former president himself has acknowledged that he and his team often focused more on designing sound policy than selling it politically.

“We can’t just be the nice people and say, oh, this is great, all the things we’ve been able to do,” said Democratic National Committee Chair Jaime Harrison. “People need to understand who actually did it. The ‘D’ in Democrat stands for delivers.”

The DNC has already spent the past several months peppering local markets across the country with billboards, digital and television ads reminding voters of the hometown Democrats who helped pass the rescue plan. As Americans gather for more traditional July Fourth celebrations next month, the party plans to start a new campaign highlighting the role the legislation played in restoring normalcy this summer.

The enhanced child tax credit that will begin rolling out on July 15 will give Democrats another opportunity to highlight provisions of the rescue package and make the case that Americans have more money ahead of the back-to-school shopping season because of the legislation.

The rescue measure is the centerpiece of President Joe Biden’s pandemic response and has, so far, received praise from a majority of Americans. A late March poll from The Associated Press-NORC Center for Public Affairs Research showed 54% approving of the massive virus relief package, while 25% disapproved. There’s a dramatic partisan split, however, with 80% of Democrats backing the measure compared to just 26% of Republicans.

Although Republicans united in opposing the legislation, they have promoted some of its more popular provisions, including the assistance for restaurants, which has directed $24.4 billion to 95,000 participants, according to the Small Business Administration.

Democrats have accused the GOP of hypocrisy and are certain to use the legislation as a cudgel against Republicans next year. But the GOP is betting that other economic issues may take precedence, including concerns about inflation and arguments that some provisions in the bill make it less attractive for the jobless to find work.

“Countless small businesses across the country have been hurt by Democrats’ $1.9 trillion socialist giveaway because it incentivized people not to work,” said Mike Berg, a spokesperson for the National Republican Congressional Committee, which focuses on retaking control of the House. “Even worse, Democrats’ spending spree is causing inflation, which is a hidden tax on every single American.”

If Republicans successfully recast the legislation as a costly government giveaway, that could prove powerful in sharply divided congressional districts like the one that includes Hill Top Distillery. Extending from the western suburbs of Richmond to exurban Washington, D.C., it was once firmly Republican territory and sent Eric Cantor, the former House majority leader, to Congress.

But the booming Richmond suburbs have tipped the district narrowly toward Democrats. In 2018, Spanberger became the first Democrat to win the seat in several decades. She was reelected last year by about 8,000 votes out of roughly 453,000 cast and is a top target of Republicans heading into 2022.

After touring the distillery this week, Spanberger acknowledged concerns about the cost of the rescue program, but said she would enter the election year focused on its benefits.

“It’s a risk to spend billions of dollars supporting distilleries and breweries and restaurants,” Spanberger said. “But if they all go under, that’s a loss for the community, that’s a loss from an employment standpoint.”

“When I’m talking about what the value of this bill was,” she continued, “yes, it was a tremendous investment, but that’s what it was — an investment.”