WASHINGTON (AP) — The Senate Commerce Committee on Thursday approved President Joe Biden’s nomination of Eric Lander to be chief science adviser, one of the last unfilled Cabinet posts in the Biden administration.

Lander, a geneticist and founding director of the Broad Institute of MIT and Harvard, was the lead author of the first paper announcing the details of the human genome, the so-called “book of life.” He has been nominated as director of the White House Office of Science and Technology Policy, a position that Biden has elevated to Cabinet rank.

Sen. Maria Cantwell, D-Wash., the Commerce panel chair, said she wished Biden had named a woman for the job, but said Lander has pledged to work to elevate women and minorities in science.

“Dr. Lander and I have come to a focus and understanding that the very first task (he) should focus on is helping all of us add diversity of women and minorities in the science field,” Cantwell said. “So he and I will be working aggressively on that.”

Lander’s nomination was approved on a voice vote. Six Republicans opposed Lander, including Sen. Marsha Blackburn of Tennessee, who said at his confirmation hearing that Lander’s meetings with the late Jeffrey Epstein, a disgraced financier who was charged with sex trafficking before his apparent suicide, were “of tremendous concern.”

Sen. Tammy Duckworth, D-Ill., who led the confirmation hearing in Cantwell’s absence, told Lander she was “troubled” by his meetings with Epstein, as well as by allegations that he downplayed the contributions of two Nobel Prize-winning female scientists.

Lander apologized for an essay he wrote that downplayed the work of the female scientists and called Epstein “an abhorrent individual.”

He never requested or received funds from Epstein or his foundation, Lander said. “The sum total of my interactions (with Epstein) was that I met him briefly at two events within the span of three weeks in the spring of 2012,” Lander said at the April 29 hearing.

No senator mentioned Epstein or any allegation against Lander at Thursday’s committee meeting.

Sen. Ed Markey, D-Mass., called Lander “a visionary scientist and thinker” and “a pioneer who sees unanswered questions as not barriers, but as an expanse of possibility.”

Lander, also a mathematician, is a professor of biology at both Harvard and MIT and his work has been cited nearly half a million times in scientific literature, one of most among scientists. He has won numerous science prizes, including a MacArthur “genius” fellowship and a Breakthrough Prize, and is one of Pope Francis’ scientific advisors.

The panel’s approval clears the nomination for an eventual Senate confirmation vote.

If approved, Lander would nearly complete Biden’s Cabinet. The only remaining unfilled Cabinet post is that of Office of Management and Budget director. Shalanda Young has been serving as acting OMB director after her confirmation as deputy director. Neera Tanden withdrew her nomination for OMB head after several senators said they would not vote for her. 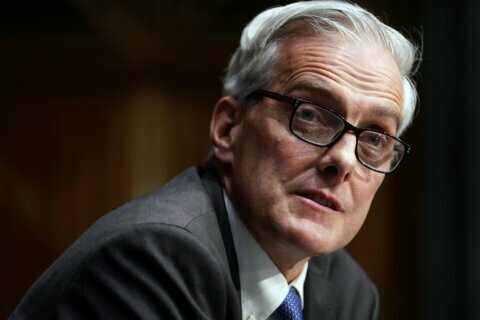